From the site’s beginning through the end of this study period – September 2011 to July 3, 2016 – there have been a total of 4,799 petitions submitted by the public that received at least 150 signatures and are included in the site’s archive. That works out to an average of about 83 petitions per month. However, public interest and engagement has waxed and waned over that period, with upticks in interest around particular events. Here is a look at different phases of the effort:

2011 through mid-2012: A flurry of initial interest followed by a significant cooling-off period

The launch of the site generated a significant amount of early attention. During the site’s first eight days (Sept. 22-30, 2011) 174 petitions collected the minimum number of signatures to be archived on the site. Of those first petitions, 16 were about immigration, while 13 involved requests to legalize marijuana. 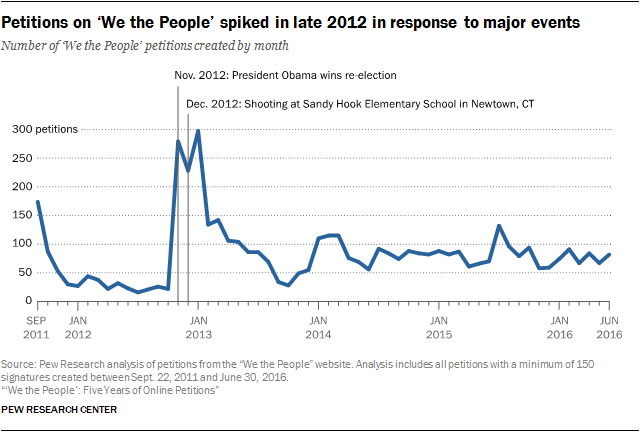 Late 2012 through early 2013: A surge in petitions following Obama’s re-election

Interest in the site increased dramatically starting in late 2012. From November 2012 through January 2013, there were a total of 804 petitions – an average of 268 per month. This increase was driven in large part by reactions to two major events.

First, just days after President Obama won re-election in November 2012, a petition was created to request the White House allow the state of Texas to “peacefully” secede from the United States and form its own government. Similar petitions were soon created calling for each of the 50 states in the U.S. to either secede from the Union or have a vote on secession. On the week of Nov. 7-14 alone, there were 74 different petitions about secession. A few states, such as Ohio and Virginia, had as many as three separate petitions with similar aims. Several of these pro-secession petitions reached the signature threshold for a White House response, which was issued on Jan. 11, 2013.

The matter of secession gained so much attention that it sparked a backlash on the site: Eight different petitions were created to oppose the secession movement, with three of those calling on the White House to either strip the citizenship of, or deport, all signatories of the original secession petitions.

The second major event that contributed to this increase in activity was the mass shooting at Sandy Hook Elementary School on Dec. 14, 2012. That event led to a flurry of petitions regarding gun control and gun rights. In the two weeks following the shooting, there were 53 separate petitions on gun-related issues. The majority of those were in favor of more gun control, such as one created on Dec. 14 that called the White House to “immediately address the issue of gun control through the introduction of legislation in Congress.”

2013 and beyond: Petition filings settle into a consistent level

Unlike the earlier periods, the level of activity has not spiked dramatically following major events, suggesting the public has become less likely to view the site as a meaningful way to be heard in regards to breaking news.

Over time, fewer petitions have met the threshold for receiving a formal White House response – in large part due to increases in the number of signatures required

In the nearly five years the site has existed, the share of petitions receiving the signatures needed to receive an official White House response has decreased dramatically. However, most of those decreases can be attributed to the two occasions when the White House increased the signature thresholds. 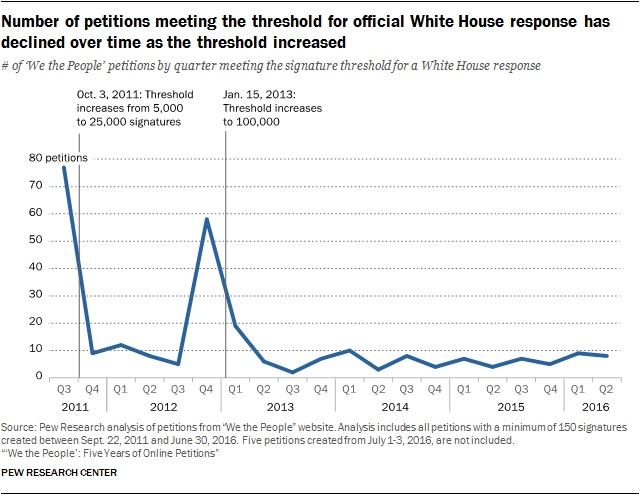 During the first 12 days of the site’s existence – when “We the People” was receiving significant media attention and the signature threshold was just 5,000 signatures ­many petitions met that threshold. Out of the 186 archived petitions posted between Sept. 22 and Oct. 3, 2011, 81 of them (44%) reached the 5,000 signature goal.

On Oct. 3, the White House increased the signature threshold to 25,000, and the share of petitions meeting that total decreased significantly. From that day through January 15, 2013, some 1,098 petitions were posted on the site that were included in the archive. Of those, just 9% – 100 in total – reached the 25,000 signature threshold.

Put somewhat differently, in the nearly five years analyzed by Pew Research Center, a total of 268 petitions reached the signature threshold needed to receive an official White House response – and 30% of those cases occurred during the first 12 days of the site’s existence when the threshold was set at 5,000 signatures.

Next: 3. Most common petition subjects
← Prev Page
Page1Page2You are reading page3Page4Page5Page6Page7
Next Page →

‘We the People’: Five Years of Online Petitions 1. The background of the ‘We the People’ website
2. Use of the site over time
3. Most common petition subjects 4. White House responses and policy impact of petitions Acknowledgments Methodology