Whether through immaturity, lack of knowledge or malicious intent, teenagers, like adults, occasionally experience controlling or troubling behaviors as part of their romantic relationships. The digital world offers a whole realm of tools to exact revenge, retaliate against, spy on, control, abuse or hurt a current or former partner. While some behaviors are clearly always abusive, others are more nuanced – one person’s oppressive number of text messages is another person’s close connection to a loved one. In most cases, the context of these behaviors is critical to determining where they fall on a spectrum from potentially innocuous to annoying to controlling and harmful.

In this study, we asked teen daters about a number of things they might have done to someone they were dating or used to date, and in most cases, few teens report such behavior. There are few differences between boys and girls and younger or older teens in reporting these acts. 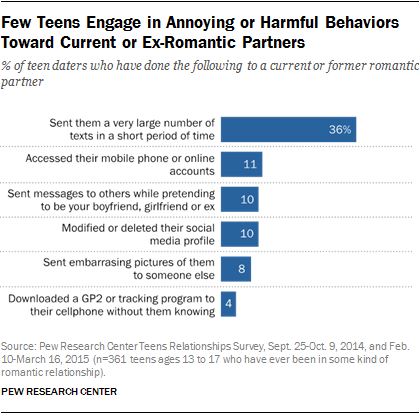 The experiences we asked about in our study fall on a continuum from highly context-dependent to almost always controlling or abusive. Some of the behaviors in our study, such as accessing a partner’s profile or sending a large number of texts to a partner in a short period of time, depend a lot on the feelings and perspective of the teen’s partner. In some contexts, these are intrusive and invasive and in others they are a part of a mutually agreeable interaction. Overall, teens were more likely to report engaging in these more contextually dependent experiences. Other behaviors, such as impersonating an ex in a message or modifying or deleting their account, are less clear. And some behaviors, such as sending embarrassing pictures of their significant other to someone else and installing a tracking device without permission, fall more resolutely at the controlling and harmful end of the spectrum. Very few teens in our study engaged in these more problematic behaviors.

Messaging is a potential venue for attacks or revenge on partners or exes. And about a third of teens with dating experience (36%) report sending a very large number of texts in a short period of time to a current or former partner. However even as this question was asked in the context of other questions about potentially vengeful behaviors, “a very large number” is open to interpretation, and could be either abusive, or part of mutually appealing communication between romantic partners.

About one-in-ten (11%) teens with dating experience say they’ve accessed the mobile phone or online accounts of someone they were dating or had been dating. Older girls are more likely to report this access than older boys (16% vs. 7% of older boys.) Permission is a critical element in understanding the nature of these experiences – while some teens may relish sharing the contents of their digital tools and profiles with a partner, others find it invasive of their privacy.

10% of teen daters have impersonated their boyfriend, girlfriend or ex in a message

Another set of behaviors are also context dependent, but are even muddier. Impersonating an ex in a message and modifying or deleting a partners profile have fewer potential scenarios where they aren’t moving into harmful or controlling territory.

One-in-ten teen daters (10%) have sent messages to others pretending to be their boyfriend, girlfriend or ex. Again, context is important here – is it a joke everyone finds funny? Or is it a potentially embarrassing or destructive communication?

Another 10% of teens with relationship experience say they’ve modified or deleted a partner or ex-partner’s social media profile. Teens from households earning less than $50,000 annually are more likely to say they’ve modified or deleted a partner’s or ex’s social media profile than those from wealthier households (17% vs. 7%). As with accessing a profile, the permission element brings nuance to this finding.

And for a handful of behaviors in this study, it is difficult to imagine scenarios where they are not controlling or harmful. Some 8% of teens with relationship experience say they have sent embarrassing pictures of their boyfriend, girlfriend or ex to someone else, and 4% report downloading a GPS or tracking program to their partner’s or ex’s cellphone without their knowledge. 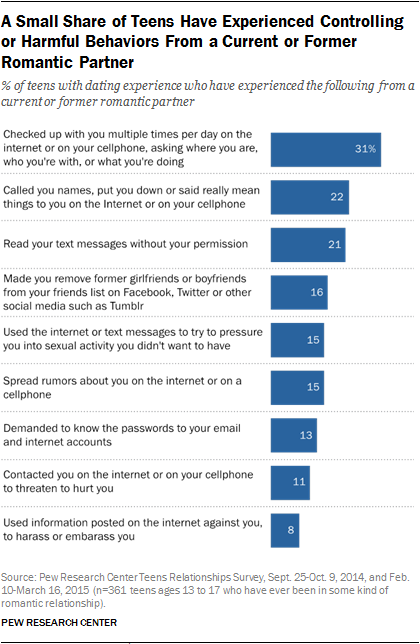 Beyond perpetrating possibly inappropriate or controlling behavior, some teen daters experience behaviors at the hands of a current or former partner that range from potentially annoying to abusive during and after their relationships. And while there are many ways to embarrass or harm a current or former partner, this analysis focuses on actions that involve digital tools like texts, cellphones and social media.

Certain activities among the ones included in the study are more likely to occur during a relationship, while others are more likely to happen to teens daters after the relationship ends. Checking up on a partner multiple times a day, reading a partner’s texts, and using digital tools to pressure them for unwanted sexual activity are the three activities that occur more during than after relationships. Conversely, spreading rumors, and name-calling and meanness through digital conduits are more likely to occur after teens break up. Pressure to remove exes and give up passwords, making threats as well as having online information used against them are about as likely to happen to teen daters both during and after a relationship.

Experiences Most Likely to Happen Within a Relationship

Fully 31% of teens with dating experience report that a current or former partner has checked up on them multiple times per day on the internet or cellphone, asking where they were, who they were with or what they were doing. Most teen daters who experienced this had it happen to them during a relationship – 26% of teen daters report their partner checked up on them during their relationship and 5% report that it happened after their relationship ended. And as with many of the activities discussed earlier in this chapter, this behavior is dependent on the context in which it occurs – and whether the recipient views it as charming or oppressive.

Among teens who describe themselves as being in a serious relationship, one-in-five say their partner “always” (2%) or “sometimes” (18%) tries to check up on them too often. A majority of teens in serious relationships say they “rarely” (29%) or “never” (51%) experience this.

About one-in-five teen daters (21%) report that a current or former boyfriend, girlfriend or partner has read their text messages without permission. For the bulk of teens, this unwanted reading of text messages happened during a relationship, with 18% of teen daters reporting such an experience. For a small number of teens, this intrusion occurred after a breakup, with 3% reporting a former partner reading their texts without permission.

Nearly one-in-seven teen daters (15%) say a current or former partner has pressured them, via the internet or text messaging, to engage in sexual activity they did not want to have. One-in-ten teen daters report that this happened during a relationship and 5% report that former partner pressured them after a relationship ended. Teens of early high school age (14 to 15) are more likely to report this than younger or older teens. Teens from families earning less than $50,000 annually were more likely than teens from families earning more to report being pressured via digital means into unwanted sexual activity (21% vs. 12%).

Experiences Equally Likely to Occur During and After a Relationship 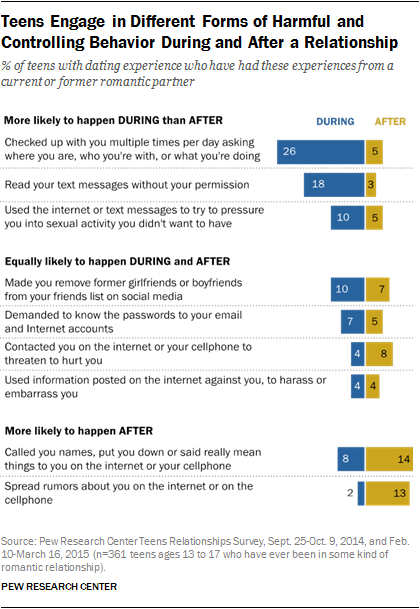 Roughly one-in-seven (16%) teens with relationship experience say a current or former partner has made them remove former girlfriends or boyfriends from their friends list on Facebook, Twitter or other social media. About the same number of teens experience this during their relationship (10%) and after (7%).

About one-in-eight (13%) teens with dating experience report that their current or former partner demanded they share their passwords to email and internet accounts with them. And teens are about equally as likely to experience this during a relationship (7%) as after a relationship ends (5%).

Just 11% of teens with relationship experience report that a current or former partner has contacted them on the Internet or on their cellphone to threaten to hurt them. Teens are equally likely to have threats made against them during and after a relationship is over. About one-in-ten (8%) teen daters have been threatened digitally by an ex, and about 4% have experienced online or mobile phone based threats from a partner during a romantic relationship. Teens from less well-off households – earning less than $50,000 annually – are more likely to report receiving digital threats from a current or former partner (17% vs. 9%).

Experiences Most Likely to Occur After a Relationship Ends:

About one-in-five teen daters has had a partner or ex call them names, put them down or say mean things to them online or on a cellphone

One-in-five (22%) teens with relationship experience have had a partner use the internet or a cellphone to call them names, put them down or say really mean things to them. This is more likely to happen after the relationship is over as it is during it. A full 14% of teen daters report that this happened after the relationship ended, while 8% of teens report that a boyfriend or girlfriend had done this to them during their relationship. Once again, less well-off teens – from families earning less than $50,000 per year – are more likely to experience this type of abuse, with 30% of less well-off teens reporting it, while 18% of teens from higher-income families report such experiences.

Fully 15% of teen daters report that a current or former partner spread rumors about them using digital platforms like mobile phones or the internet. However, just 2% of teen daters experienced this during a relationship – the bulk (13%) of youth with dating experience report that this happened after a breakup.

A high school boy from our focus groups details some of the controlling behaviors he has experienced at the hands of exes:

Another high school boy explained how one of his former girlfriends broke into his profiles:

“This one girl actually reset my passwords.”

Digital content can also be used to exact revenge. As one high school boys explained:

“I mean, if you don’t really care about the person that much and they did you wrong or something, you’ve got something funny on them, [but] I don’t think it’s going to feel good. Like … some people take it too far, exposing people and putting their news out there and whatnot.”

Context for digital behaviors is quite important, as things that seem cute within a relationship seem creepy or uncomfortable outside of it. As one high school girl notes

Next: Chapter 5: After the Relationship: Technology and Breakups
← Prev Page
Page1Page2Page3Page4You are reading page5Page6Page7Page8Page9Page10Page11
Next Page →