The Pew Research Center Libraries 2015 Survey obtained telephone interviews with a nationally representative probability sample of 2,004 people ages 16 and older living in the United States. Interviews were conducted via landline (nLL=704) and cell phone (nC=1,300; including 760 without a landline phone). The survey was conducted by Princeton Survey Research Associates International (PSRAI). The interviews were administered in English and Spanish by Princeton Data Source from March 17 – April 12, 2015. Statistical results are weighted to correct known demographic discrepancies. The margin of sampling error for the complete set of weighted data is ±2.4 percentage points. Results based on the 1,718 internet users/digital connectors2 have a margin of sampling error of ±2.6 percentage points.

Interviews were conducted from March 17 – April 12, 2015. As many as seven attempts were made to contact every sampled telephone number. Sample was released for interviewing in replicates, which are representative subsamples of the larger sample. Using replicates to control the release of sample ensures that complete call procedures are followed for the entire sample. Calls were staggered over times of day and days of the week to maximize the chance of making contact with potential respondents. Interviewing was spread as evenly as possible across the days in field. When necessary, each telephone number was called at least one time during the day in an attempt to complete an interview.

For the landline sample, interviewers asked to speak with the youngest male or female ages 16 or older currently at home based on a random rotation of gender. If no male or female was available, interviewers asked to speak with the youngest person ages 16 or older of the other gender. This systematic respondent selection technique has been shown to produce samples that closely mirror the population in terms of age and gender when combined with cellphone interviewing.

For the cellular sample, interviews were conducted with the person who answered the phone. Interviewers verified that the person was ages 16 or older and in a safe place before administering the survey. Cellular respondents were offered a post-paid cash reimbursement for their participation.

Weighting is generally used in survey analysis to compensate for sample designs and patterns of non-response that might bias results. The sample was weighted to match national population parameters for ages 16 or older. A two-stage weighting procedure was used to weight this dual-frame sample.

The first stage of weighting corrected for different probabilities of selection associated with the number of adults in each household and each respondent’s telephone usage patterns.3 This weighting also adjusts for the overlapping landline and cell sample frames and the relative sizes of each frame and each sample. 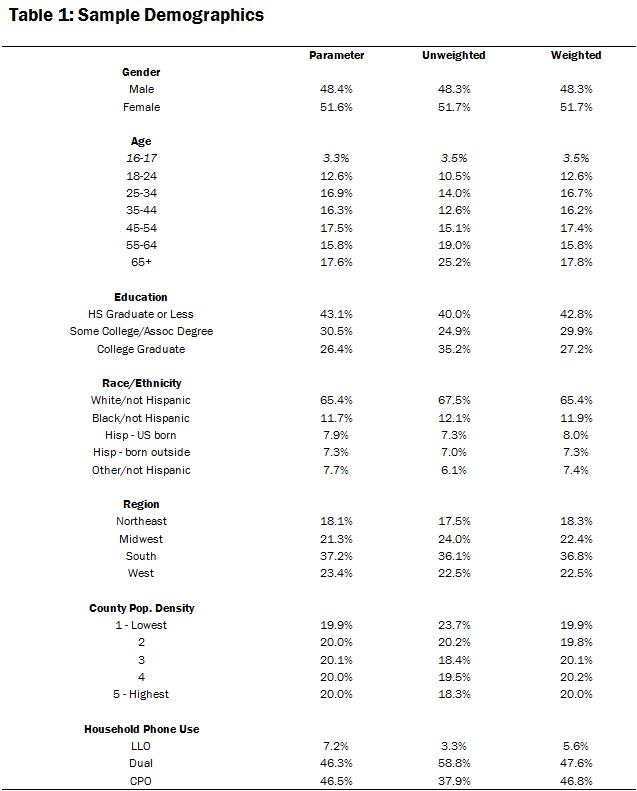 Post-data collection statistical adjustments require analysis procedures that reflect departures from simple random sampling. PSRAI calculates the effects of these design features so that an appropriate adjustment can be incorporated into tests of statistical significance when using these data. The so-called “design effect” or deff represents the loss in statistical efficiency that results from systematic non-response. The total sample design effect for this survey is 1.20.

The survey’s margin of error is the largest 95% confidence interval for any estimated proportion based on the total sample — the one around 50%. For example, the margin of error for the entire sample is ±2.4 percentage points. This means that in 95 out every 100 samples drawn using the same methodology, estimated proportions based on the entire sample will be no more than 2.4 percentage points away from their true values in the population. The margin of error for estimates based on form 1 or form 2 respondents is ±3.4 percentage points. It is important to remember that sampling fluctuations are only one possible source of error in a survey estimate. Other sources, such as respondent selection bias, questionnaire wording and reporting inaccuracy, may contribute additional error of greater or lesser magnitude. 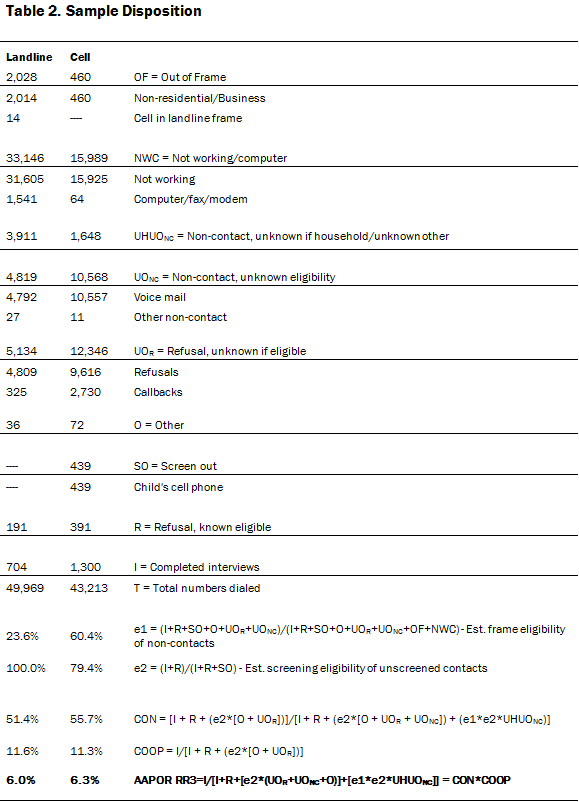 Libraries at the Crossroads Chapter 1: Who Uses Libraries and What They do at Their Libraries Chapter 2: Libraries and Services for Learning, Key Groups and Economic Opportunities Chapter 3: Lower Income Americans and Communities of Color More Likely to see Libraries as Community Anchors About This Report
Methods