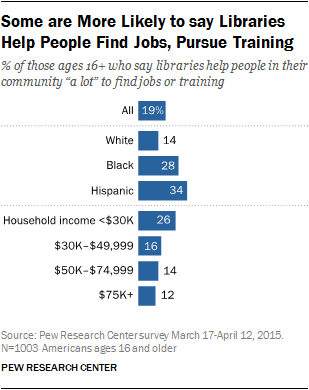 Americans use of public libraries and generally positive attitudes about them cut broadly across all demographics surveyed. However, for lower-income Americans and those who are members of communities of color, libraries have a special role as places to learn new job skills, explore new digital technologies and provide services to them or their community. 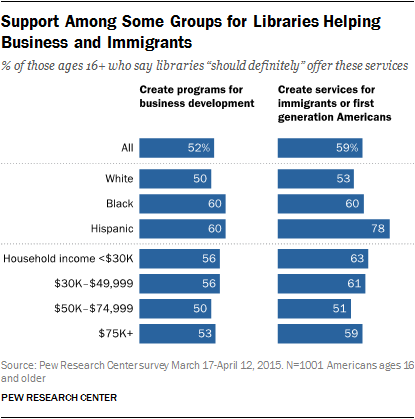 When it comes to economic opportunity, African Americans, Hispanics and those in households with an annual income under $30,000 are more likely to say libraries help people find jobs or pursue job training. Hispanics, in particular, are more likely than the overall population to say libraries help “a lot” or “somewhat” in job pursuits or training by a 58% to 48% margin. 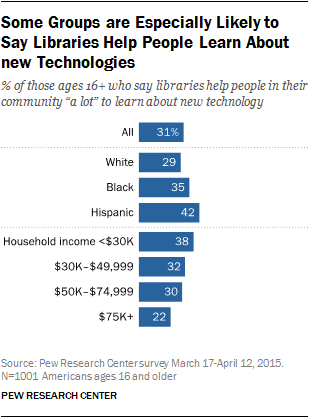 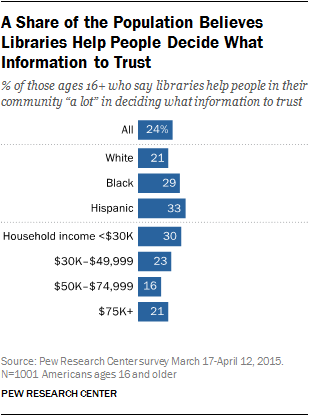 The pattern also carries over when people think about the library’s role in helping learn about new technologies, find health information or how to decide what information to trust – particularly when focusing on the share of people who say libraries help “a lot” in different realms. 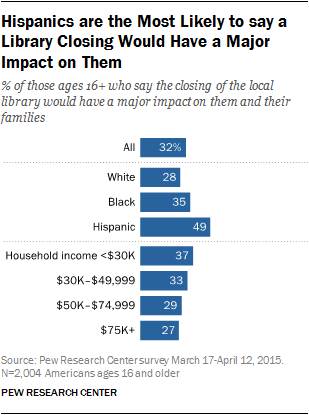 With respect to health searches, low-income Americans are more likely to say libraries help “a lot” in that area (44%), compared with 36% of all respondents. African Americans and Hispanics also exceed the average.

For learning about new technologies, Hispanics and low-income Americans are more likely than the typical respondent to see libraries helping “a lot” as they explore gadgets and applications, with African Americans above the norm to a lesser extent.

Next: About This Report
← Prev Page
Page1Page2Page3You are reading page4Page5Page6
Next Page →

Libraries at the Crossroads Chapter 1: Who Uses Libraries and What They do at Their Libraries Chapter 2: Libraries and Services for Learning, Key Groups and Economic Opportunities
Chapter 3: Lower Income Americans and Communities of Color More Likely to see Libraries as Community Anchors
About This Report Methods