Now that 85% of U.S. adults own a cell phone—and half (53%) of those are smartphone owners—information is available wherever and whenever people need it.

Younger adults, minorities, and those in particular need of health information lead the way

Among all cell phone owners, some demographic groups are more likely than others to look for health information on their phones: Latinos, African Americans, those between the ages of 18 and 49, and college graduates. 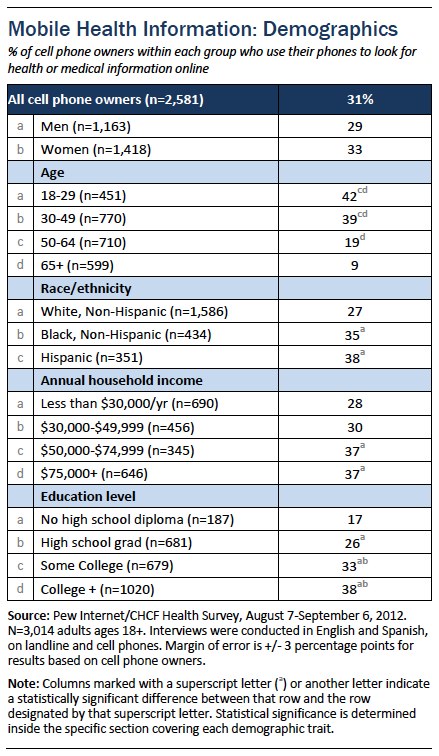 Mobile health information also seems to appeal to certain groups of health consumers: caregivers, people who went through a recent medical crisis, and those who experienced a recent, significant change in their physical health such as gaining or losing a lot of weight, becoming pregnant, or quitting smoking. 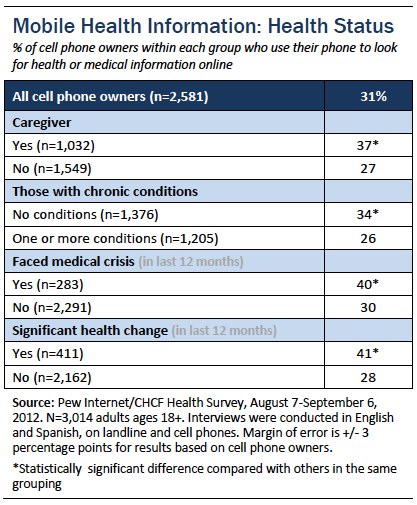 Again, 53% of cell phone owners in the U.S. say that they own a smartphone. This translates to 45% of all American adults. Younger people are more likely than older adults to own a smartphone, as are people with higher income and education levels. 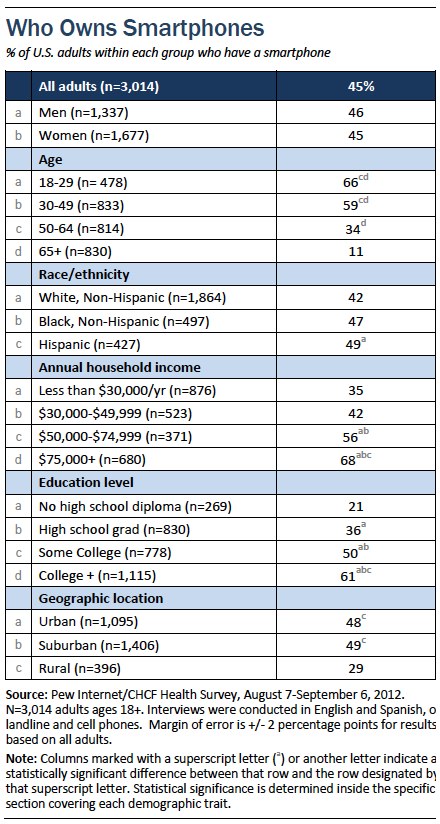 Fully 52% of smartphone owners have looked up health information on their phone, compared with just 6% of other cell phone owners.

A person’s likelihood to use their cell phone to look for health information is amplified by each of the characteristics identified in the tables above:  youth, having a higher level of education, living in a higher-income household, being Latino, being African American – and owning a smartphone. Each of these observations holds true under statistical analysis isolating each factor. In other words, it is not just that smartphone owners are likely to be younger than other American adults and both groups are likely to use their phones to look up health information. Each characteristic has an independent effect on mobile health information consumption.

In 2010, when the same percentage of U.S. adults owned cell phones, 17% of cell phone owners reported using their phones to access health information.  Today, that number stands at 31%, almost double the previous figure.

Nearly all demographic groups report significant increases in this activity, with the exception of those over 65 and those who did not complete high school.  A few groups stand out: cell phone owners who are African American, college graduates, women, those with an annual household income between $50,000 and $74,999, and those between the ages of 30-49.

Smartphone ownership has greatly increased over the last two years and no doubt had an effect on this trend. 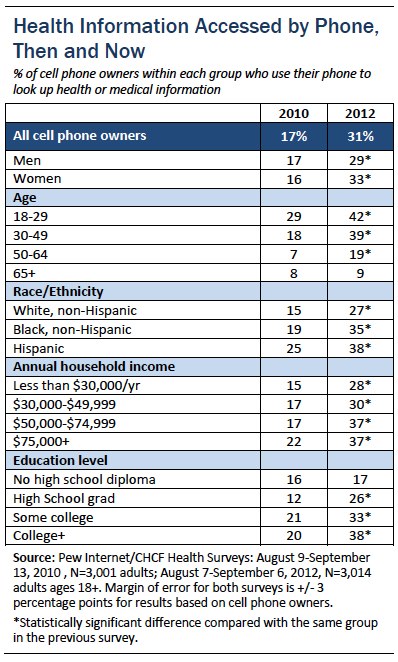 Text messaging is a nearly universal activity, especially among younger cell phone owners, but it has not yet had a significant impact on the health market.

Smartphone owners are more likely than other cell phone owners to get text updates about health: 9%, compared with 6%. 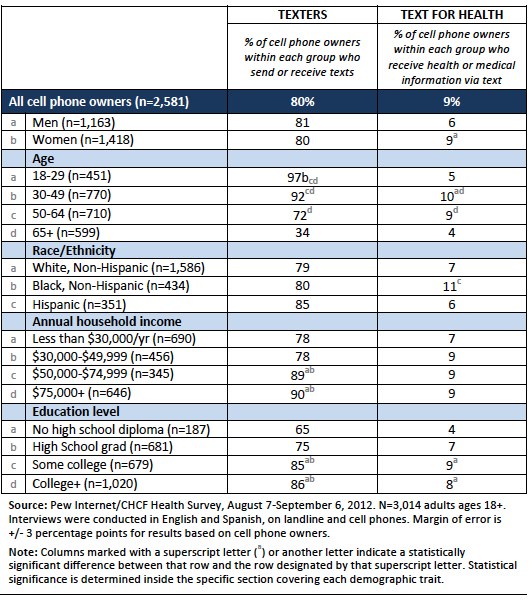 People who are potentially dealing with more serious health situations – caregivers, people living with chronic conditions, those with recent significant health changes – are more likely to engage in this mobile health activity. 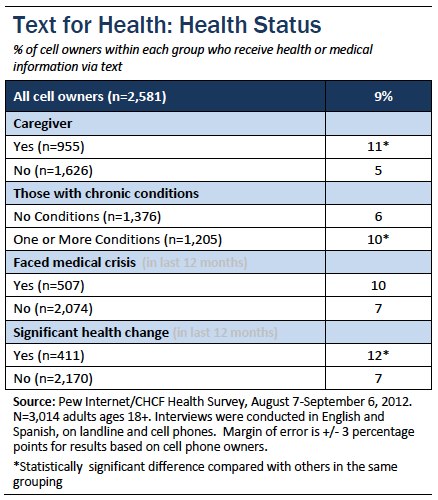 One in 5 smartphone owners has a health app 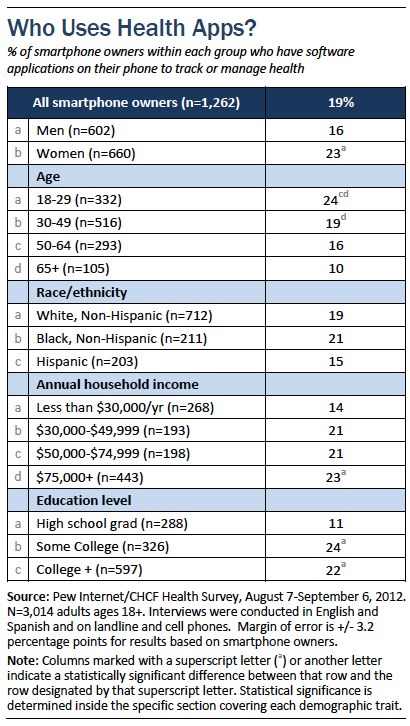 Those who have faced a significant health change in the last twelve months are also more likely to have downloaded a health app. 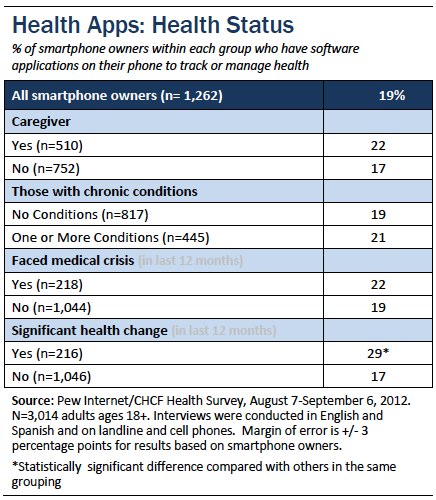 Exercise, diet, and weight apps are the most popular types of health apps downloaded.  Some 38% of health app users track their exercise, 31% monitor their diet, and 12% use an app to manage their weight. Other health apps track menstrual cycles, blood pressure, pregnancy, blood sugar or diabetes, and medication. The WebMD app was also cited, along with a number of other brand-name apps (a full list of uncategorized responses is below). 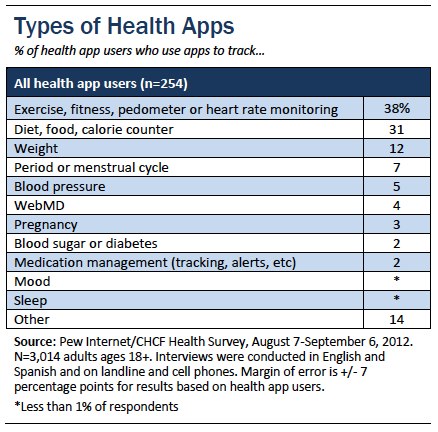