The rapid adoption of cell phones and, especially, the spread of internet-connected smartphones are changing people’s communications with others and their relationships with information. Users’ ability to access data immediately through apps and web browsers and through contact with their social networks is creating a new culture of real-time information seekers and problem solvers.

The Pew Research Center’s Internet & American Life Project has documented some of the ways that people perform just-in-time services with their cell phones. Earlier this year, we reported on the 9% of adults who sometimes make spur-of-the-moment text donations to charities.1 We have also examined the use of cell phones inside stores during the holiday season, as users consulted friends about purchases and looked online for price comparisons and reviews about things they were thinking of buying.2

More recently, a new nationally representative survey by the Pew Internet Project has found additional evidence of this just-in-time phenomenon. The survey was conducted between March 15 and April 3, 2012 among 2,254 adults age 18 and older and it found that 88% of adults are cell phone owners and that 46% are smartphone owners. In the section of the survey exploring the just-in-time behaviors of the cell-using population, respondents were asked if they had used their phone to access different types of time-sensitive information in the 30 days preceding the survey. Their answers disclosed that:

In all, 70% of cell phone owners – representing 62% of the entire adult population – have used their phone in the previous month to do at least one of these real-time searches.

The demographics of just-in-time phone users

The young, the relatively well-educated and well-off, and parents of minor children are more likely than other kinds of cell owners to have used their cell phones recently for the just-in-time activities we measured in this survey. 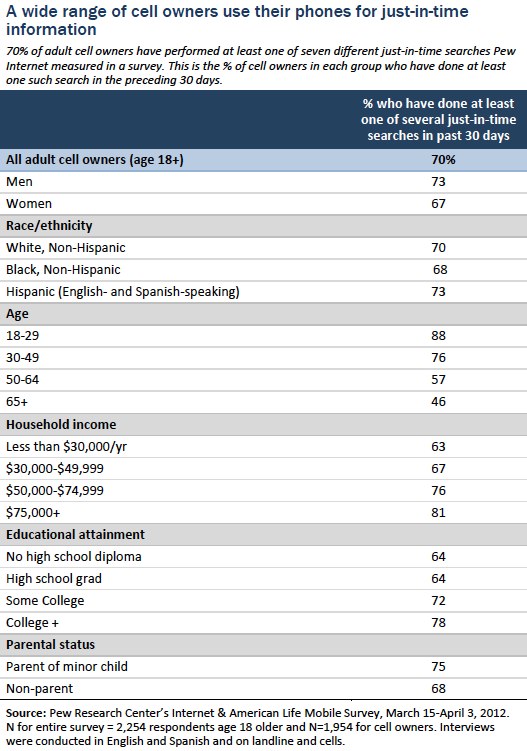 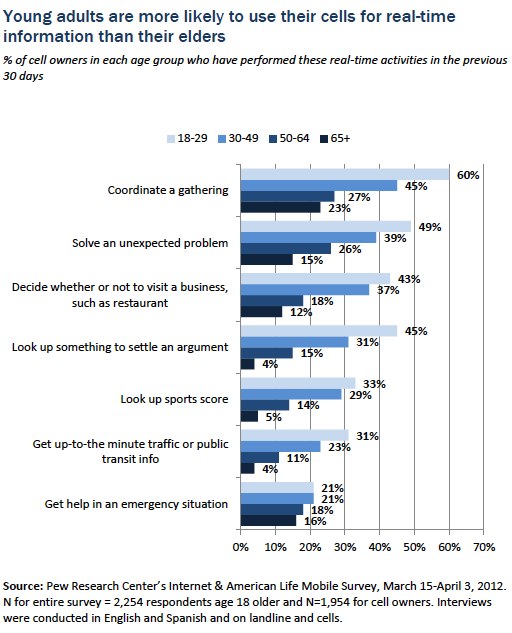 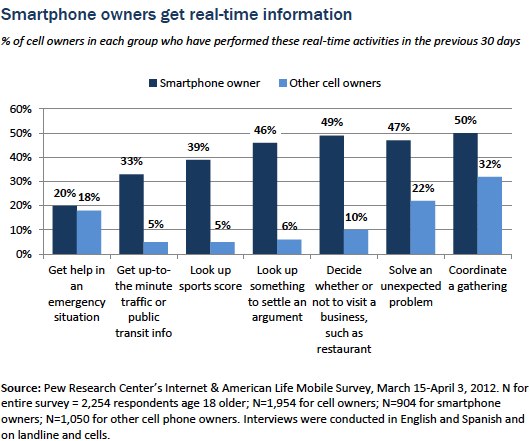 Other demographic differences appear in a least some of these just-in-time searches. For instance:

In addition, rural cell users are less likely than suburban and urban users to have done some of the just-in-time searches in the past month. 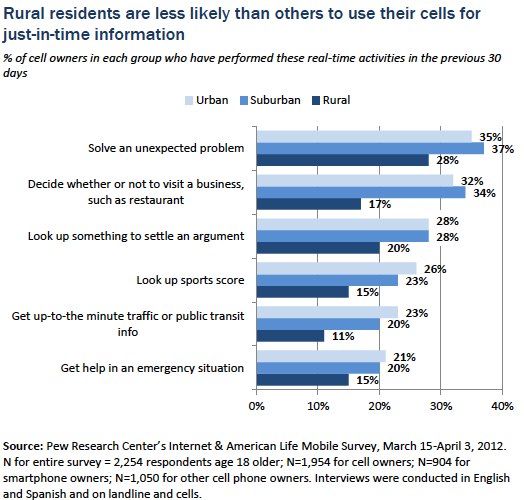 The just-in-time information searches discussed above are just one way in which cell owners are using their phones to access detailed information and advanced applications through their mobile devices. We asked owners of cell phones who get email, have apps, or access the internet on their phones several questions about their general use of their phones. Some 65% of smartphone owners say they have used their phone to get turn-by-turn navigation or directions while driving, with 15% doing so on a typical day.

MobileEmerging Technology ImpactsInformation Seeking
Defining generations: Where Millennials end and Generation Z begins
25% in U.S. see at least some truth in conspiracy theory that COVID-19 was planned
Are you in the American middle class? Find out with our income calculator
Americans Who Mainly Get Their News on Social Media Are Less Engaged, Less Knowledgeable
Americans Fault China for Its Role in the Spread of COVID-19