Search engine use over time

A February 2012 Pew Internet survey finds that 91% of online adults use search engines to find information on the web, up from 84% in June 2004, the last time we did an extended battery of survey questions about people’s search engine use. On any given day online, 59% of those using the Internet use search engines. In 2004 that figure stood at just 30% of internet users.

As early as 2002, more than eight in ten online adults were using search engines, and as we noted in an August 2011 report4, search is only rivaled by email both in the overall percent of internet users who engage in the activity and the percent of internet users doing it on a given day. The table below shows how search compares over time with some other popular online activities. 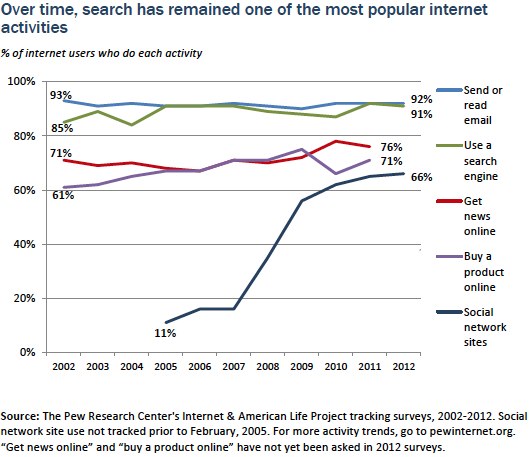 Search is most popular among young adult internet users, those who have been to college, and those with the highest household incomes. These same groups—the young, college-educated, and affluent—are also most likely to report using a search engine “yesterday.” And while white and black online adults are more likely than Hispanics to report using search overall, white online adults stand out from all others as more likely to use search on a given day. 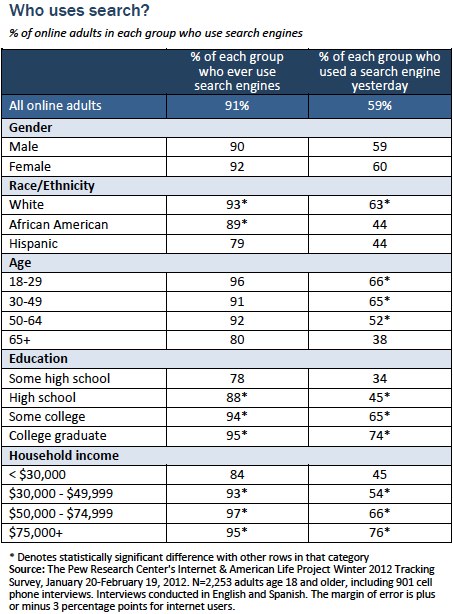 Asked how often they use a search engine to find information online, just over half of all search engine users (54%) say they do this at least once a day, a significant increase over 2004. 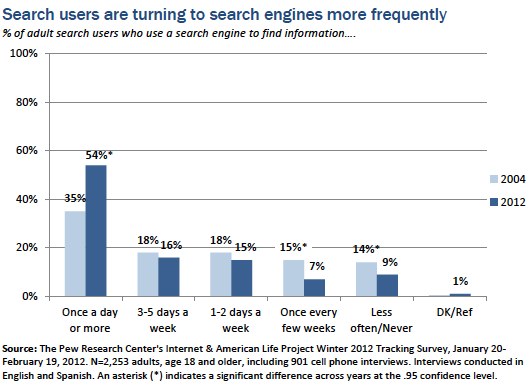 Frequency of search engine use varies by age, education and income, with adults under age 50 and those with more education and higher household incomes using search more frequently than others. 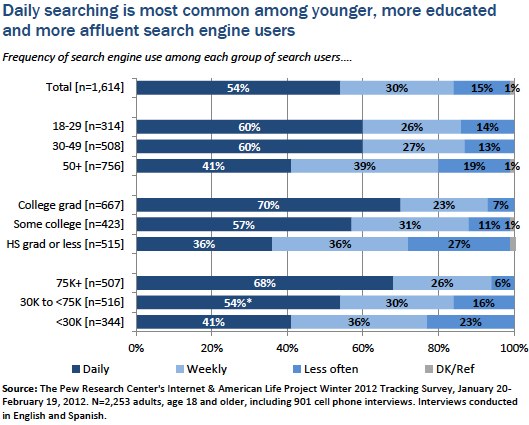 Google is far and away the most popular search engine 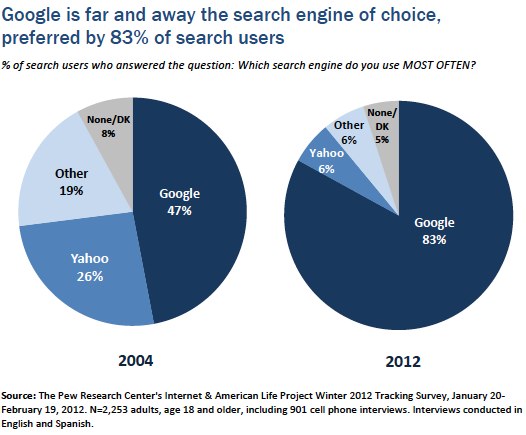 Fairly large majorities of search engine users express confidence in these tools and the results they generate. Not only does a majority believe that search engines are fair and unbiased, they also believe that most results are accurate and trustworthy. And most say that the quality and relevance of search results has been improving over time or has not changed, while very few see the quality and relevance of results declining.

Asked how much of the information they get in search results is accurate or trustworthy, 28% say all or almost all and another 45% say most. 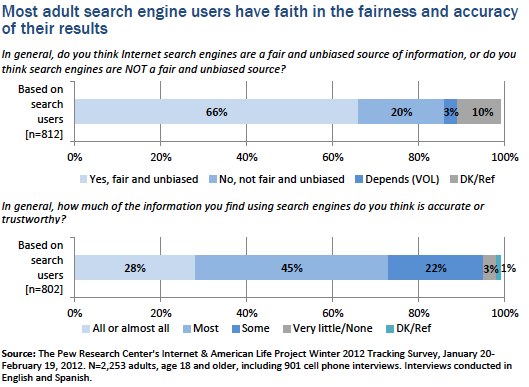 Relevance and quality over time

Half of adult search users (52%) say search results have gotten more relevant and useful over time, while just 7% see them as getting less relevant or useful. The remaining 40% see no change over time. A similar question about changes in the quality of information over time yields similar results. Just over half of adult search users (55%) say that in their experience the quality of search results has gotten better over time, while 4% say the quality has gotten worse. 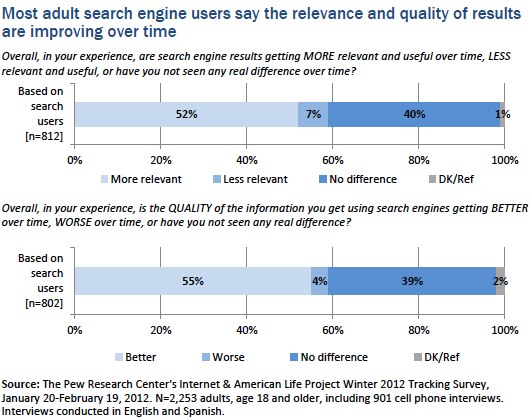 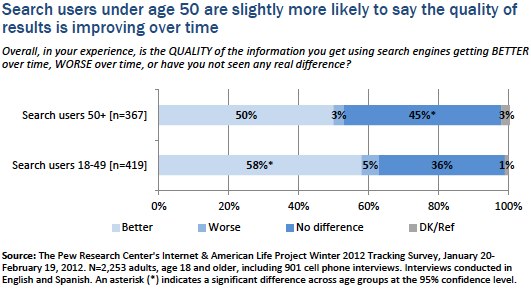 Searchers’ experiences and perceptions of their own abilities 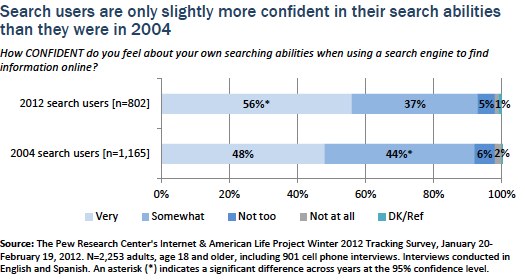 Search users under age 50 are more likely to say they are very confident in their search abilities when compared with those age 50 and older (64% v. 40%), as are search users who have some college education when compared with those who do not (64% v. 45%). And while 68% of adults living in households with incomes of $75,000 or greater say they are very confident in their ability to find information online using search engines, the same is true of only about half of adults in all other income ranges.

In addition to expressing more confidence, search users in 2012 are also slightly more likely than they were in 2004 to say that they always find the information they are looking for. While 29% of search engine users today say this is the case, just 17% reported the same in 2004. Still, in both 2012 and 2004, the majority of search users say they find what they are looking for most of the time, but not always. 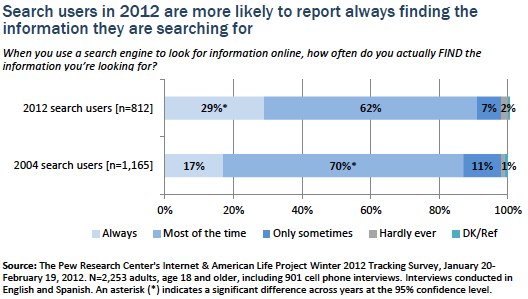 Given the largely positive view of the quality of information search engines yield, and their own search abilities, it is not surprising that many search users report positive experiences using these tools. More than eight in ten searchers say they have learned something new or important using a search engine that really helped them or increased their knowledge. And half say they were able to find a really obscure fact or piece of information using a search engine. 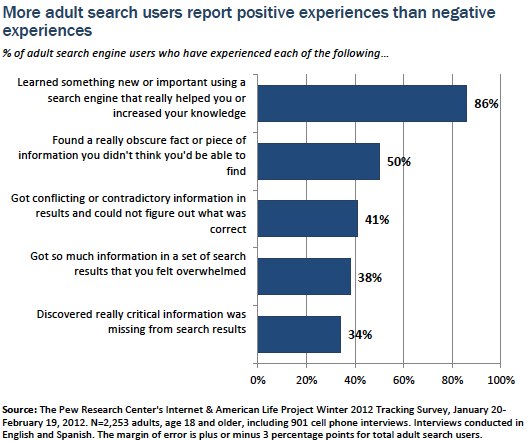 The experiences search engine users report vary slightly by education level, sex, and age. For example, college educated search engine users are more likely than those with less education to report having all five of the experiences asked about in the survey. And men are more likely than women to report finding obscure facts via search engines, getting conflicting information, and discovering that critical information is missing from their results. 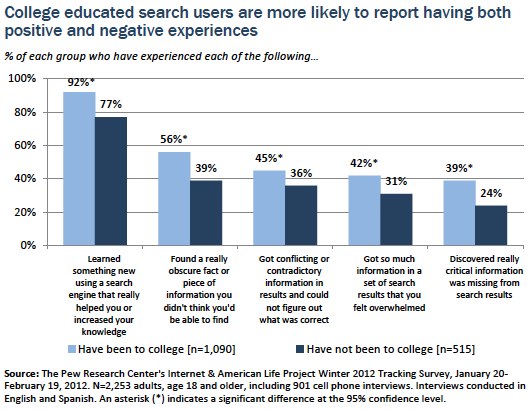 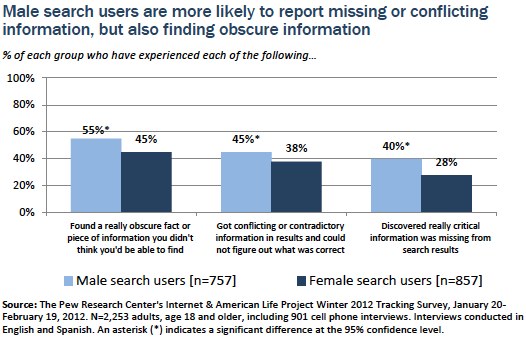 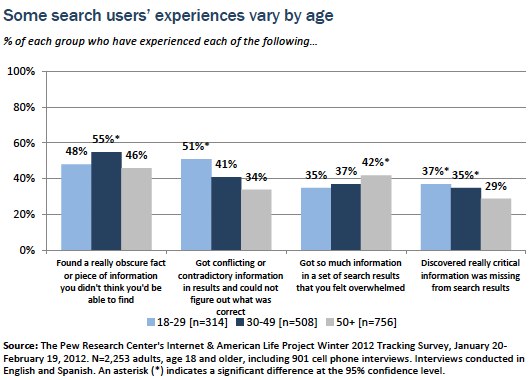 The survey asked respondents their views of search engines and other websites collecting information about them and using it to either shape their search results or target advertising to them. Overall, attitudes toward these practices are mixed, but the majority of internet and search users express disapproval.

This is especially relevant as Google implements a new privacy policy in which information about an individual’s online behavior when they are signed in on any of Google’s sites (including its search engine, Google+ social networking site, YouTube video-sharing site, and Gmail) can be collected and combined into a cohesive user profile. As the firm put it in a blog post:

“If you’re signed in to Google, you expect our products to work really beautifully together. For example, if you’re working on Google Docs and you want to share it with someone on Gmail, you want their email right there ready to use. Our privacy policies have always allowed us to combine information from different products with your account—effectively using your data to provide you with a better service. However, we’ve been restricted in our ability to combine your YouTube and Search histories with other information in your account. Our new Privacy Policy gets rid of those inconsistencies so we can make more of your information available to you when using Google.”5

The company argues that the value of these user profiles is their ability to signal to marketers which products are likely to appeal to different individuals, thereby allowing them to target online advertising to those most likely to find it relevant and purchase products. Some privacy and consumer advocates argue that many consumers do not want to have personal information about them collected and that profiling process is often confusing to consumers, who don’t know how they are being tracked and what profiling procedures determine what ads they see. 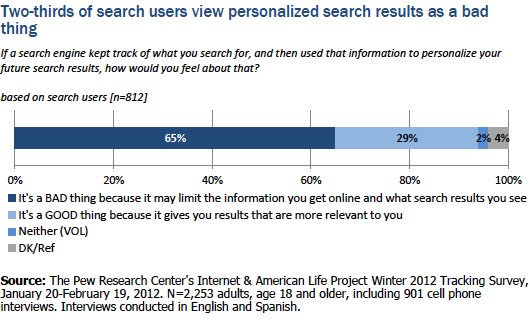 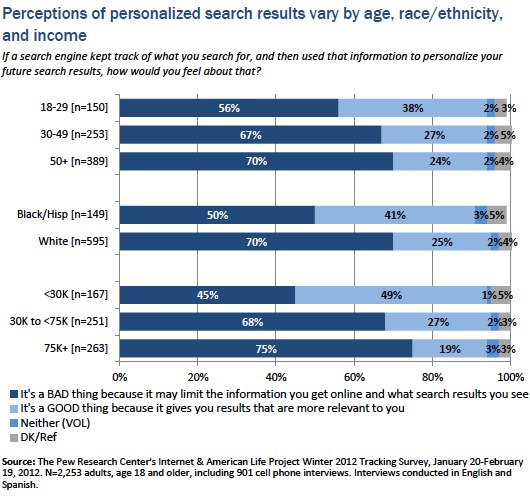 A different version of the question asking about personalized search results yields even more negative views. Almost three-quarters of searchers say they would NOT BE OKAY with a search engine keeping track of their searches and using that information to personalize their future search results because they see it as an invasion of privacy. This view holds constant across most demographic groups, with the exception of those age 50 and older, who are especially likely to view the practice negatively. 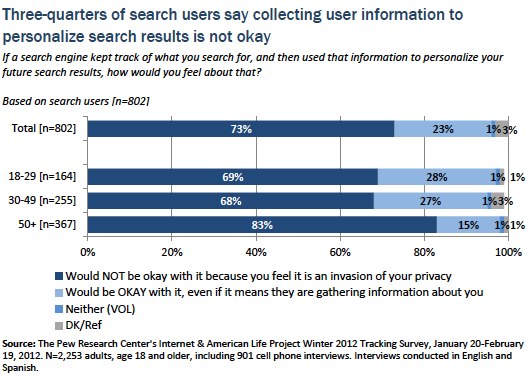 Targeted advertising: 59% of internet users have noticed it, but most don’t like it

In addition to asking search users about personalized search results, all internet users were asked whether they had noticed ads being targeted to them online and more broadly, their opinion of targeted advertising. A majority (59%) say they themselves have noticed targeted advertising online – specifically, they have noticed advertisements online that are directly related to things they had recently searched for or sites they had recently visited. 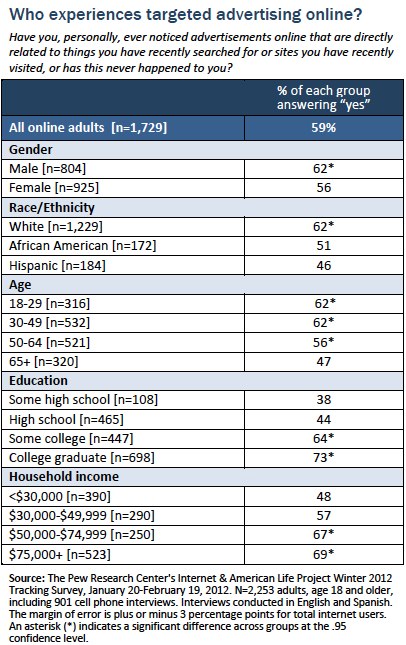 The demographic groups most likely to report noticing targeted advertising online are men, white internet users, those under age 65, those who have been to college, and those living in higher income households. Three-quarters (73%) of college graduates have noticed online ads related to things they recently searched for or sites they recently visited, significantly higher than online adults with lower educational attainment. Likewise, online adults living in households with annual incomes of $75,000 or greater are also especially likely to notice such ads, with 69% reporting having this experience. 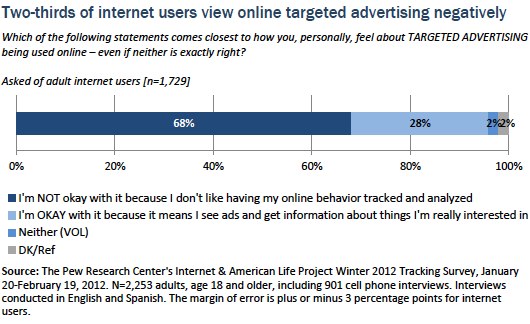 While a majority of every demographic group says they are not okay with online targeted advertising, younger internet users and those in the lowest income households are more likely than others to view the practice favorably. Yet, even among those groups, almost six in ten say they are not okay with targeted ads because they do not like having their online behavior tracked and analyzed. 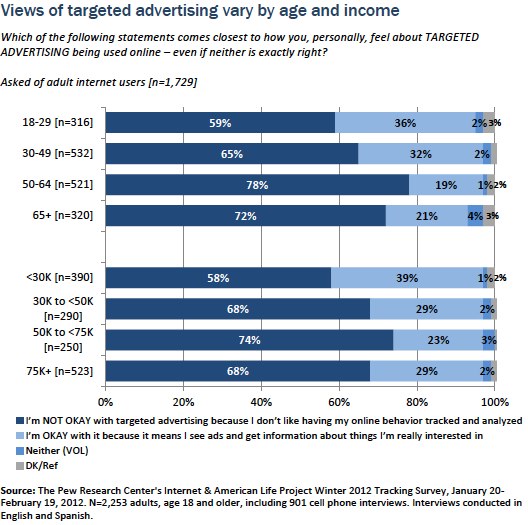 Just 38% of internet users say they are generally aware of ways they themselves can limit how much information about them is collected by a website. Among this group, one common strategy people use to limit personal data collection is to delete their web history: 81% of those who know ways to manage the capture of their data do this. Some 75% of this group uses the privacy settings of websites to control what’s captured about them. And 65% change their browser settings to limit the information that is collected.6 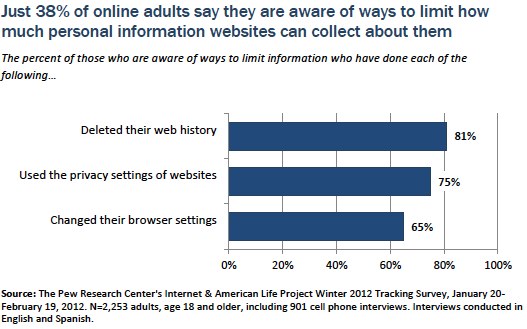 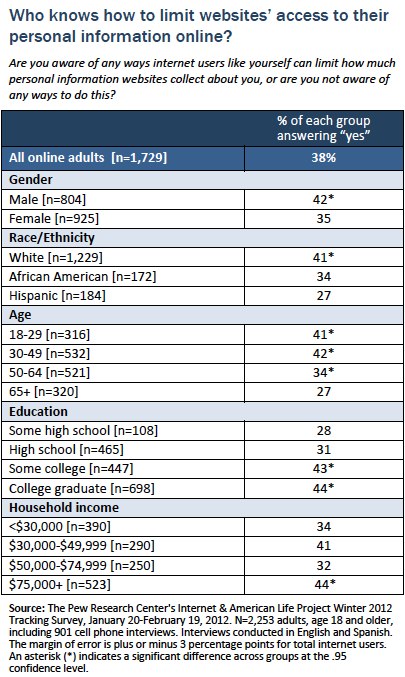 Search Engine Use 2012
Main findings
Search engine use over timeQuality of informationSearchers’ experiences and perceptions of their own abilitiesMost have negative views of search engines and other sites collecting information about themTargeted advertising: 59% of internet users have noticed it, but most don’t like itMost internet users say they do not know how to limit the information that is collected about them by a website
Methodology