Text messaging leveled off between 2010 and 2011, even as users send or receive more than 40 texts per day on average

Along with taking photos, text messaging is the most common non-voice application Americans use on their mobile phones. Some 73% of adult cell owners use the text messaging function on their phone at least occasionally (nearly identical to the 72% of cell owners who did so at a similar point in 2010). Text messaging users send or receive an average of 41.5 messages per day, with the median user sending or receiving 10 texts daily. Each of these figures is a notable increase from late 2009, and similar to what we found the last time we conducted an in-depth study of text messaging in the spring of 2010—at that point, the average number of texts sent or received per day was 39.1, with a median of 10. 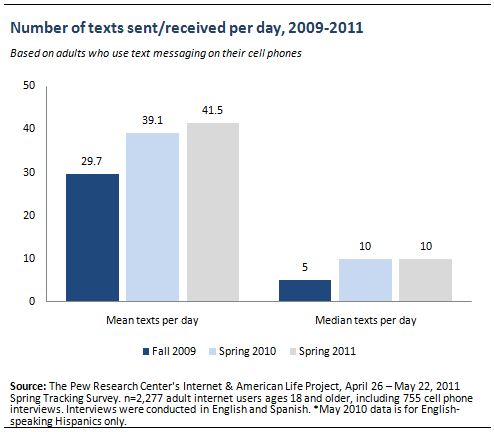 Young adults stand far above all other demographic groups when it comes to their usage of text messaging. Fully 95% of 18-29 year olds use the text messaging feature on their phones, and these users send or receive an average of 87.7 text messages on a normal day (with the median user in this age group sending or receiving 40 text messages per day).

The youngest adults (those between the ages of 18 and 24) are even more proficient in their texting habits. Both cell ownership and text messaging are nearly universal among 18-24 year olds—95% own a cell phone and 97% of these cell owners use text messaging—and the number of daily text messages this group creates or encounters on a daily basis is far and away the largest of any group:

To put these numbers in comparison, the average of 109.5 texts per day among 18-24 year olds is more than double the comparable figure for 25-34 year olds, and twenty-three times the figure for text messaging users who are 65 or older. 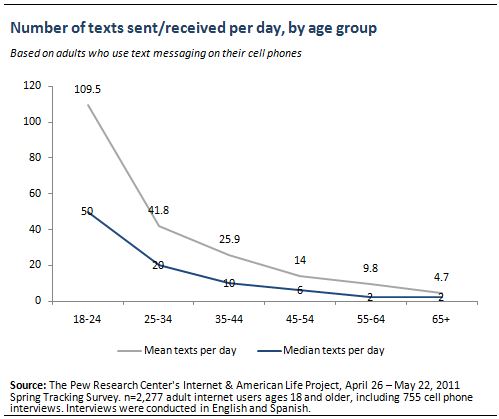 No group compares to young adults when it comes to text messaging, although several other groups do text on a daily basis at higher-than-average levels. For example, non-whites (African Americans in particular) text more often than whites, and those with lower levels of income and education text more often than those at the higher end of the income and education scale. Smartphone owners (mean=52.0, median=20) also send and receive a significantly larger number of texts per day than owners of more basic phones (mean=29.7, median=10). 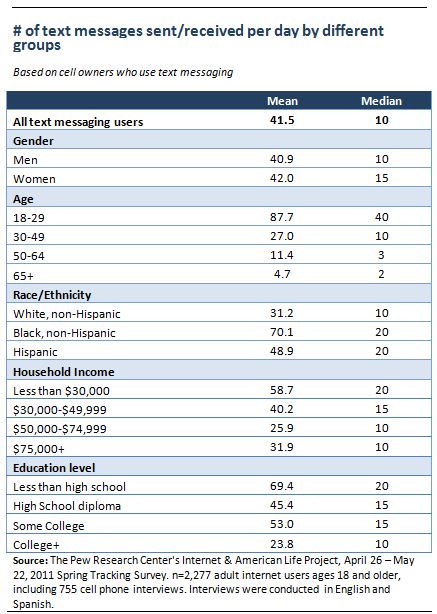 How voice calling fits in 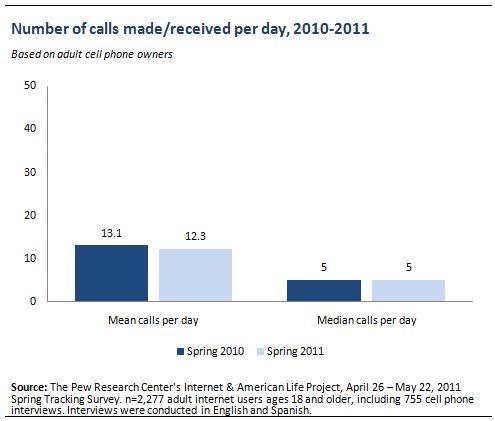 Calling and texting are highly correlated, with cell owners who text often also making a large number of voice calls, and vice versa:

Since calling and texting move in tandem, groups who engage in a high level of texting behavior (such as young adults and non-whites) also tend to engage in higher-than-average levels of voice calling. 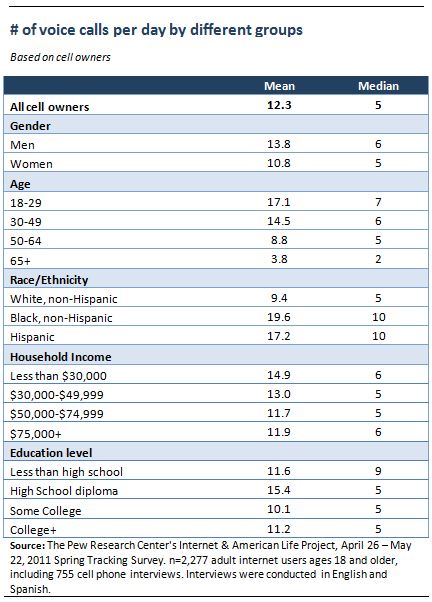 A majority of cell owners prefer a voice call when they want to be reached, although the most active texters tend to prefer a text message 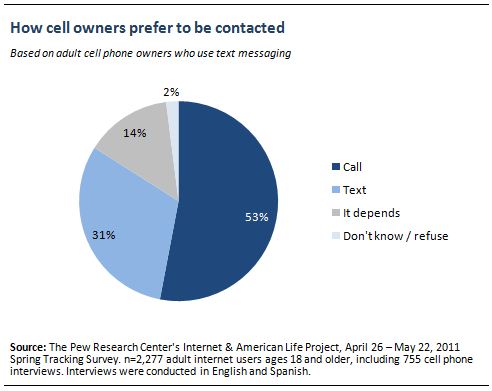 Although a majority of cell owners prefer a phone call when someone needs to reach them, active text messaging users are much more likely to prefer texting to calling. Just under half (45%) of texters who send or receive 21-50 text messages per day say that they prefer it when people contact them using text messaging, while a majority of those who send or receive more than 50 texts per day (55%) say that text messaging is their preferred mode of contact (just 27% of these users prefer to be reached by voice call). 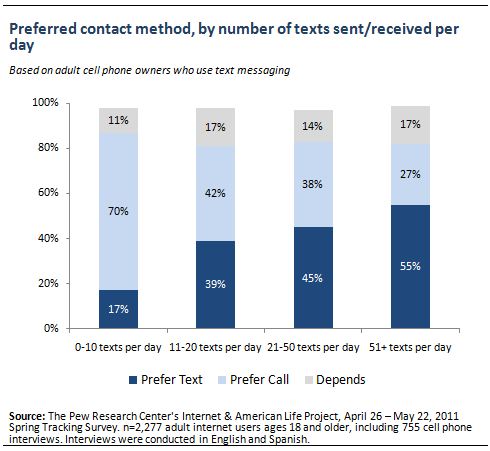 Americans and Text Messaging
How Americans Use Text Messaging
Text messaging leveled off between 2010 and 2011, even as users send or receive more than 40 texts per day on averageYoung adults are far and away the most active users of text messagingHow voice calling fits inA majority of cell owners prefer a voice call when they want to be reached, although the most active texters tend to prefer a text message
Methodology