Mobile phones have become a near-ubiquitous tool for information-seeking and communicating: 83% of American adults own some kind of cell phone. These devices have an impact on many aspects of their owners’ daily lives. In a telephone survey conducted from April 26 to May 22, 2011 among a nationally-representative sample of Americans, the Pew Research Center’s Internet & American Life Project found that, during the 30 days preceding the interview:

Young adults (those between the ages of 18 and 29) are especially likely to say that they have encountered several of these situations recently:

Text messaging and picture taking are the most common uses of cell phones outside of voice calls; Smartphone owners take advantage of a wide range of their phones’ capabilities

Text messaging and picture taking continue to top the list of ways that Americans use their mobile phones—three quarters of all cell owners (73%) use their phones for each of these purposes. Other relatively common activities include sending photos or videos to others (54% of cell owners do this) as well as accessing the internet (44%).

One third of American adults (35%) own a smartphone of some kind%%TOKEN%%, and these users take advantage of a wide range of their phones’ capabilities. Fully nine in ten smartphone owners use text messaging or take pictures with their phones, while eight in ten use their phone to go online or send photos or videos to others. Many activities—such as downloading apps, watching videos, accessing social networking sites or posting multimedia content online—are almost entirely confined to the smartphone population. 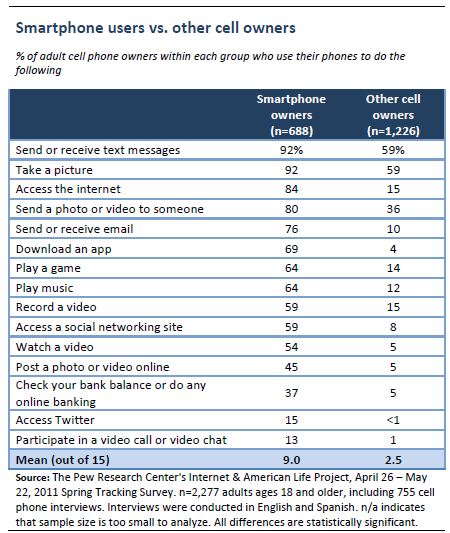 Several demographic groups use the non-voice features of their mobile phones at high rates. These include young adults, non-whites, urbanites, and those with at least some college experience.

Next: How Americans Use Their Cell Phones
← Prev Page
You are reading page1Page2Page3Page4
Next Page →