In our nationally-representative telephone survey conducted from June to September we asked teens whether they had sent or received sexually suggestive nude or nearly nude photos or videos of themselves or of someone they knew on their cell phones. Partnering with the University of Michigan, in October we conducted a series of focus groups with teens ages 12-18 and during those groups, teens took a private paper survey in which they wrote about their experiences with sexting.

These questions focus on the sending and receiving of images via cell phone, and do not address suggestive text messages without visual content or those shared by other means (such as email or online social networks). We chose this strategy because the policy community and advocates are primarily concerned with the legality of sharing images and because the mobile phone is increasingly the locus of teens’ personal, and seemingly private communication.

The Pew Internet survey data shows that 4% of all cell-owning teens ages 12-17 report sending a sexually suggestive nude or nearly-nude photo or video of themselves to someone else.10 The data reveals no difference in this practice related to gender: Girls and boys are equally as likely to have sent a suggestive picture to another person. The oldest teens in our sample – those aged 17 – are the most likely to report having sent a sexually suggestive image via text with 8% of 17-year-olds having sent one, compared to 4% of those age 12. But otherwise, there is little variation across age groups in the likelihood of having sent a sexual image by text. Teens who paid for all of the costs associated with their cell phone were more likely to report sending sexual images of themselves by text, with 17% of these teens sending sexually suggestive texts compared to just 3% of teens who did not pay for or only paid for a portion of the cost of their cell phone. Overall, 70% of teens have a cell phone that someone else, usually a parent, pays for, 19% pay part of the costs and 10% pay all of the costs of their cell phone. 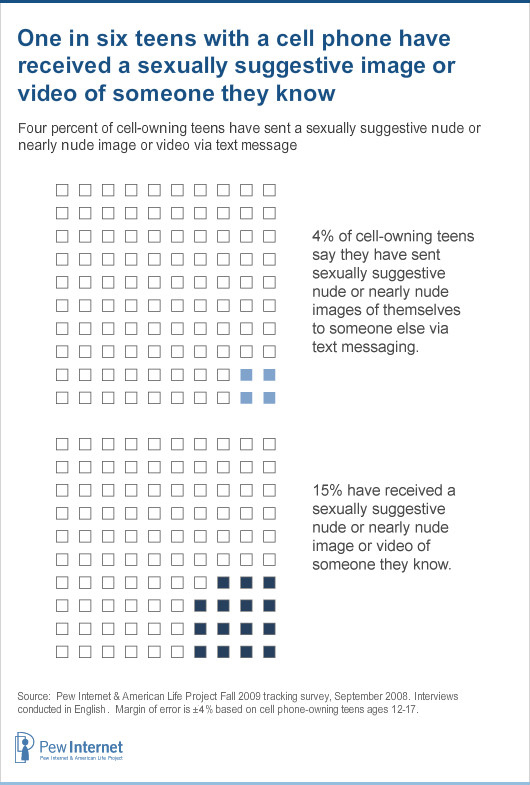 When it comes to receiving images, 15% of those ages 12-17 have received a sexually suggestive nude or nearly nude photo or video of someone they know on their cell phone. Older teens ages 14-17 are more likely than younger teens to report receiving such images or videos: 18% of older teens have received an image versus 6% of teens ages 12-13 who have received such content. The data show a steady increase in likelihood of receipt of sexually suggestive images via text by age, with just 4% of 12-year-olds receiving these images or videos compared to 20% of 16-year-olds and 30% of 17-year-olds.  There are no statistically significant differences in reports of receipt of these images by gender.

There are some indications that teens who send and receive suggestive images via text message are likely to be those whose phones are more central to their lives than less intense cell phone users. For instance, teens who send any type of text message are more likely than teens who do not text to say they have received a sexually suggestive image on their cell phone, with 16% of texters receiving these images compared to 7% of teens who do not use text messaging.  Teens with unlimited text messaging plans – 75% of teens with cell phones — are also more likely to report receiving sexually suggestive texts with 18% of teens with unlimited plans receiving nude or nearly nude images or video via their phones, compared to 8% of those with limited plans and 4% of those who pay per message.

Teens in our focus groups outlined three general scenarios in which sexually suggestive images are shared or forwarded. In one situation, images are shared between two romantic partners, in lieu of, as a prelude to, or as a part of sexual activity.

An 11th/12th grade girl talked about sexting as part of an experimental phase for teens who are not yet sexually active:

For other teens, sexting is one part of a sexual relationship.

However, these images sent between romantic partners can easily be forwarded (with or without the subject’s knowledge) to friends or classmates and beyond.

But other images are sent between friends, or between two people where at least one of the pair is hoping to become romantically involved.

Sexually suggestive images sent to the privacy of the phone have become a form of relationship currency. One senior girl reflected:

Another older high school girl wrote about the pressure on girls to share such images:

It is important to note that many teens have not sent or received or had sexually suggestive images forwarded to them.

Other teens avoid it because of their concerns about legality and the potential for public release of the images.

Some teens brand these images, particularly images of girls, as inappropriate and make judgments about the people who appear in them.  One older high school boy wrote,

Teens make fine distinctions in what is acceptable and what is unacceptable in transmitted images.

When teens in the focus groups were asked how common they believed sexting to be, the answers covered the spectrum, from infrequent to very common.

Still, some teens believe sexting is quite prevalent.  A high school girl wrote:

What is the role of parents here? One younger high school boy told us that he never sends or receives sexually suggestive images via text because “my mom goes through my phone.” However, another high school boy described how he password protected images to keep others from viewing them. He told us that he “get(s) text picture messages from girls because they like me. The picture would have nudity, but I put those on security for my phone.” On the Pew Internet telephone survey, teens whose parents said they looked at the contents of their child’s cell phone were no more or less likely to send or receive nude or nearly nude images on their phones.

One parental intervention that may relate to a lower likelihood of sending of sexually suggestive images was parental restriction of text messaging. Teens who sent sexually suggestive nude or nearly nude images were less likely to have parents who reported limiting the number of texts or other messages the teen could send. Just 8% of teens who sent sexy images by text had parents who restricted the number of texts or other messages they could send; 28% of teens who didn’t send these texts had parents who limited their child’s texting.

Next: Acknowledgements
← Prev Page
Page1You are reading page2Page3Page4
Next Page →