The handheld device has become a multi-faceted tool for digital activity, as users can do a host of things, such as sending text messages or taking pictures, that do not require being online. These non-voice data activities constitute a broader measure of handheld use. As the Pew Internet Project found in a December 2007 survey, most Americans (58%) by then had done one of ten activities on a cell unrelated to making a phone call.

The following table shows how the handheld device has worked its way further into the daily routines of many Americans. Our April 2009 survey shows that 85% of adult Americans have a cell phone and, of this group, fully 81% of them have at one time used it for a purpose other than making a phone call. On a typical day, now more than half of cell users (52%) have used it for a non-voice data activity, such as texting, emailing, snapping a picture, or any one of the other seven activities about which they were asked.

Sending text messages remains the mainstay activity for cell phone users; they are more than twice as likely to send a text on the average day as do anything else. Snapping a photo on the cell phone comes in as the next most popular activity, trailed significantly by playing a game, emailing, or access the Web for information. 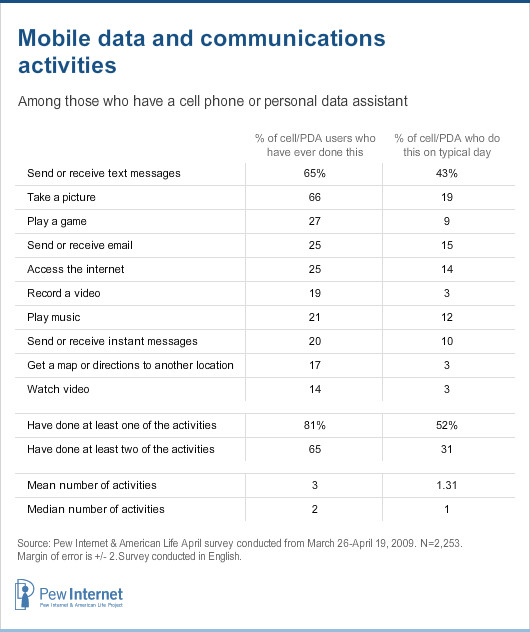 The figures for use of digital resources on the handheld represent increases from December 2007. In 2007, 77% of handheld users had “ever” used their device for at least one non-voice data activity, and 42% said they did at least one “yesterday.” These increases take place in the context of a growth in cell phone penetration from December 2007 to April 2009 from 77% to 85%.

For all adults, this translates into:

Other data underscore the growth in people’s use of their cell phone for non-voice data activities. The average number of activities engaged in on a typical day in 2007 was 0.90, a figure that grew to 1.31 in 2009, or an increase of 46% among cell users. 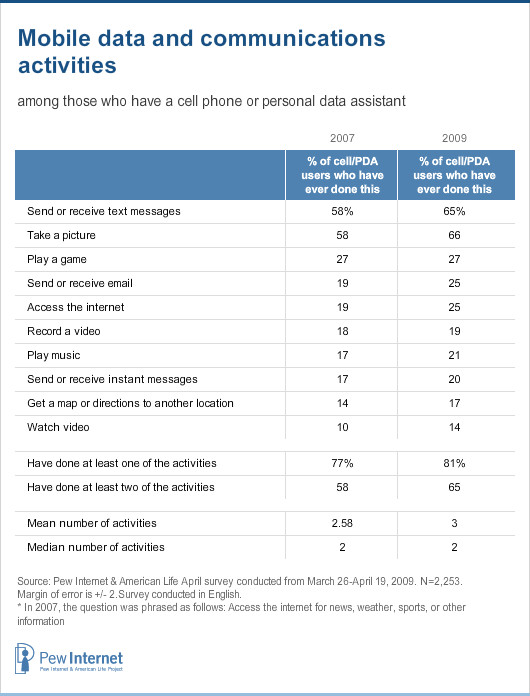 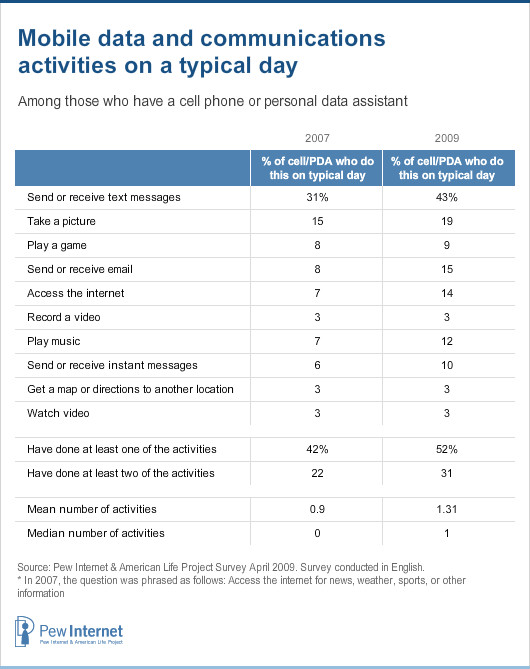 The increase for handheld activities done “yesterday” or on the “typical day” is broad based, but particularly strong for communication and information-seeking functions. Texting is up by 40% over the 2007 to 2009 time interval, and emailing on a handheld has doubled, along with accessing the internet.

The following chart represents growth from 2007 to 2009 in incidence of non-voice data activities on the mobile device. 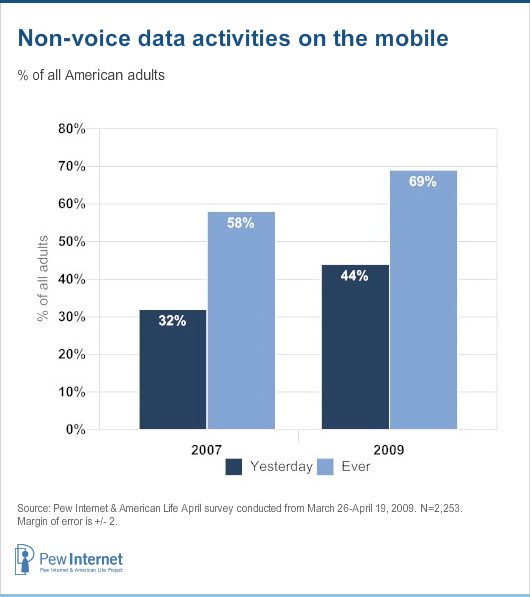 Variations by age and race

There are also differences across age groups in the use of handhelds for data applications.4 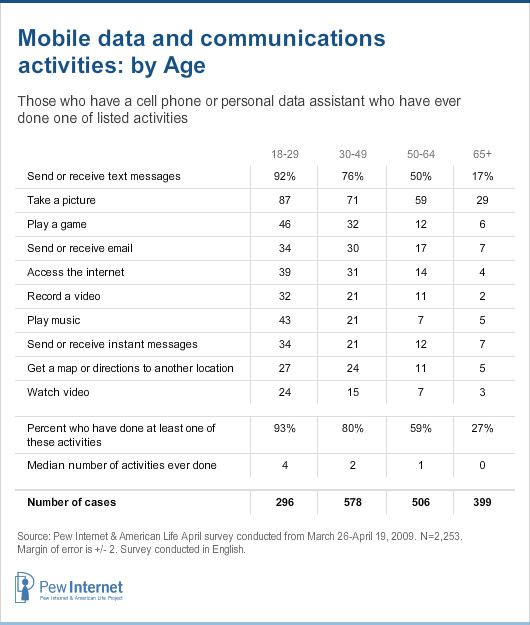 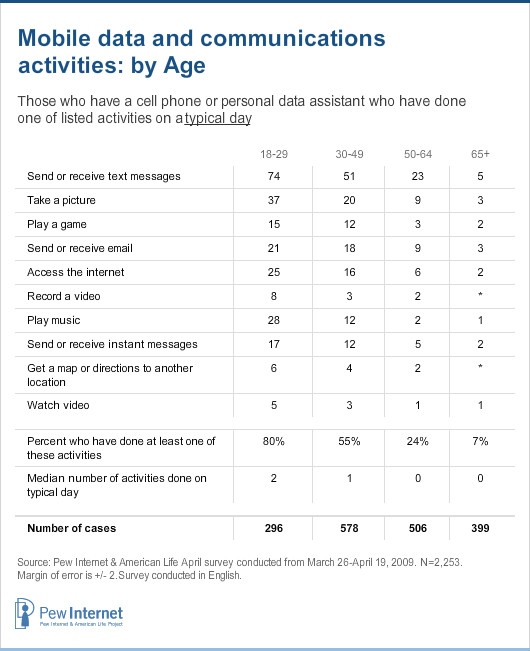 Here’s breakout of how different racial groups use the handheld device for non-voice data activity. 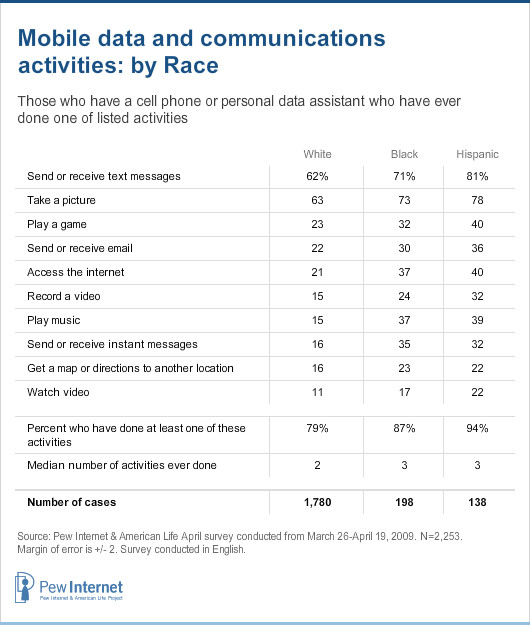 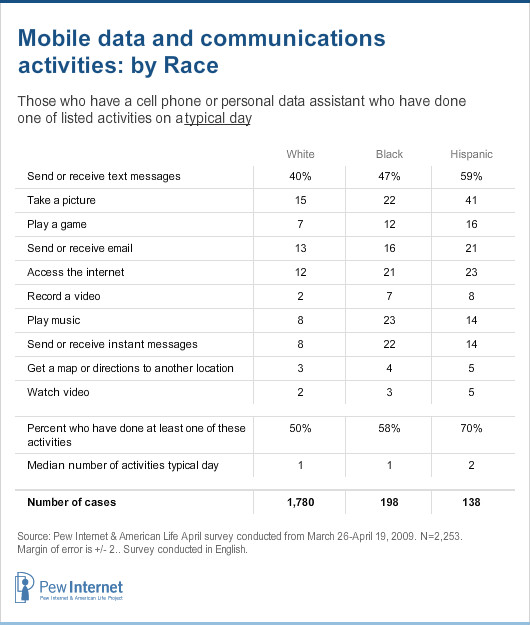 The Pew Internet Project’s “Mobile Access to Data and Information” report found, from a December 2007 survey, that 62% of all Americans had some experience with mobile access to digital data and tools. That is, they had either used a cell phone or PDA for a non-voice data application or logged on to the internet away from home or work using a wireless laptop connection, a handheld device, or a wireline connection.5 That finding was based on a broad reading of digital use on a handheld by exploring activities that sometimes required going online by using a handheld device and other activities that did not require internet use, such as taking a picture.  Our focus was on wireless and wireline use on the go – i.e. away from home or work.

The April 2009 survey that forms the basis for this report approached the question of access differently. Rather than focus on access away from home or work (by wireless or wireline access paths), it asked respondents how they get online wirelessly from any location. That yielded the figure of 56% of all Americans who have gone online wirelessly, but the number excludes use of other mobile data activities (i.e., taking a picture, texting, or recording a video). Those non-voice data activities were included in the 62% figure in the “Mobile Access to Data and Information” report.

If one were to add non-voice data activities to the 56% of adult Americans who have used the internet wirelessly in 2009, that would show that 74% of Americans have used the wireless internet or taken advantage of a non-voice data tool on their mobile device. That figure is greater than 2007’s 62%, and although the bases for the figures have commonalities, they have too many differences to be comparable. For example, the 2007 figure includes wireline “on the go” access and non-internet activities on the handheld, while the 2009 figure includes wireless access at home from a wider range of devices.

For other devices this survey asked about, online use is less common.

Among owners of game consoles (41% of adults):

Among the 14% of PDA users among adults:

Among the 2% of e-book owners:

Overall, 17% of Americans have accessed the internet using one of these four devices, but, access from these devices adds just 5 percentage points to pool of wireless users above and beyond those whose access is from laptops or cell/Smartphones.

Next: Access for African Americans
← Prev Page
Page1Page2Page3Page4You are reading page5Page6Page7Page8
Next Page →

Wireless Internet Use Online access in a multiplatform world Using laptops to get online wirelessly Internet access on the handheld
Mobile access to data and information
OverviewTrendsVariations by age and raceAn additional note on 2007 to 2009 trendsOnline access from other devices
Access for African Americans Appendix About Us, Methodology