Using a cell phone or a Smartphone to get online unfolds differently for Americans than it does for laptops. More people have a handheld device than have laptops, but fewer have accessed the internet with it. This gap is not entirely behavioral. Not all cell phones may be equipped to get online and not every user may be in reasonable proximity to a network that allows access. Still, when defining online access on a handheld as those who have used email, sent or received instant messages, or accessed the internet for information, some 32% of cell or Smartphone users have accessed the internet on their device.

Our April 2009 survey also asked respondents if “yesterday” (i.e., the day before they answered our survey) they engaged in the activities that constitute online use. Analysis of those activities shows that 23% of cell users went online on the typical day. That contrasts with 64% of laptop users who did this. Representing these figures as a share of all adults shows that:

The demographic look of handheld internet users differs in certain respects than that of laptop users. With an average of 32% of all adults having ever gone online with a handheld as a baseline:

Comparing the April survey to a similar survey in 2007, there were strong increases in the incidence of people accessing the internet with their handheld devices. For our purposes, the means using a cell phone or other connected gadget to share email, exchange instant messages, or access the net for information. Among cell phone users: 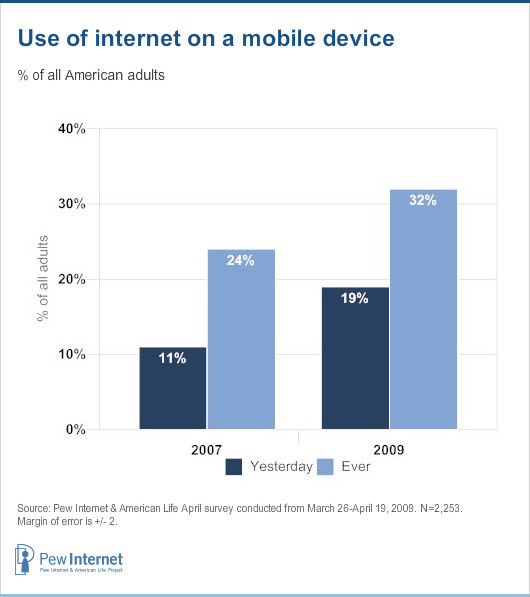 The rate at which Americans went online with their handheld on the typical day increased by 73% in the sixteen months between the 2007 and 2009 surveys. The measure for “ever having used the internet on a handheld” increased by 33% in that time frame.

As noted, 38% of people (or 32% of all adults) with cell phones or other handheld devices have used them to go online – meaning they have used handhelds for emailing, IM-ing, or simply accessing the web for information. The last group – the 25% who have used their handheld to access the internet for information – received follow-up questions on how often they do this and from where. Here is how the 25% of handheld information seekers responded:

Unlike laptop users, who do the bulk of their wireless internet surfing at home, handheld users are most often away from home when access the internet on that device.

Differences in use across racial and ethnic categories

With respect to internet use on a handheld device, there are clear differences across racial categories. It is important to note that, for Hispanics, the data represent English-speaking Hispanics only, as the survey did not provide a Spanish language option. 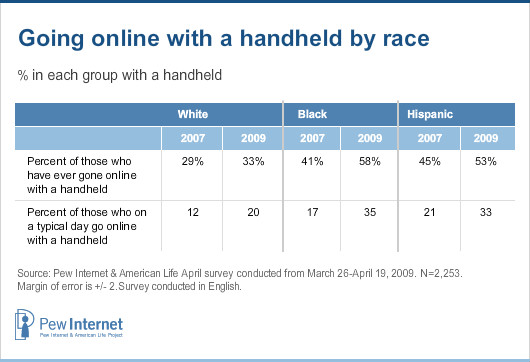 The figures look as follows when represented as percent of all respondents in each group. 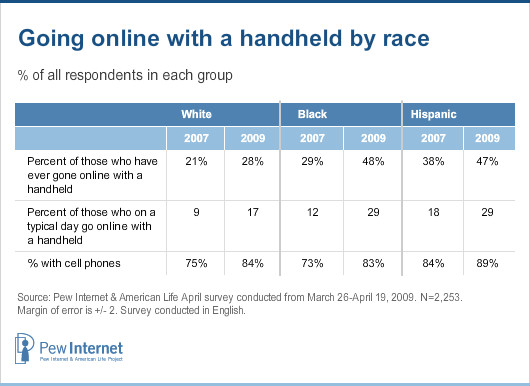 The growth in use of the internet on the handheld for African Americans is striking, particularly when focusing on the frequency of doing this on the typical day. Recall that handheld internet use on the average day grew by 73% for the general population from the end of 2007 to the beginning of 2009. For African Americans, growth was twice the rate of whites – from 12% to 29% – or a growth rate of 141%.

The fact that non-internet users report going online with a handheld doesn’t seem to make sense. Why didn’t these individuals respond affirmatively when asked in the survey whether they use the internet or use email “at least occasionally”? There are two possible reasons. First, the survey’s questions on internet use follow one on computer use, and this may encourage respondents to think of online access as computer based, with the cell phone not as an option that comes to mind. Second, non-users may not use the handheld for online access with enough frequency to qualify as “at least occasionally.”

Next: Mobile access to data and information
← Prev Page
Page1Page2Page3You are reading page4Page5Page6Page7Page8
Next Page →