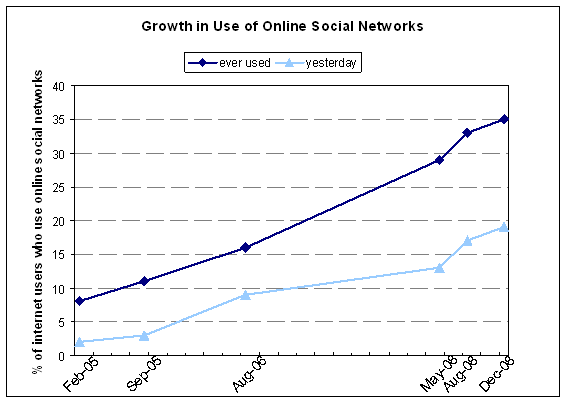 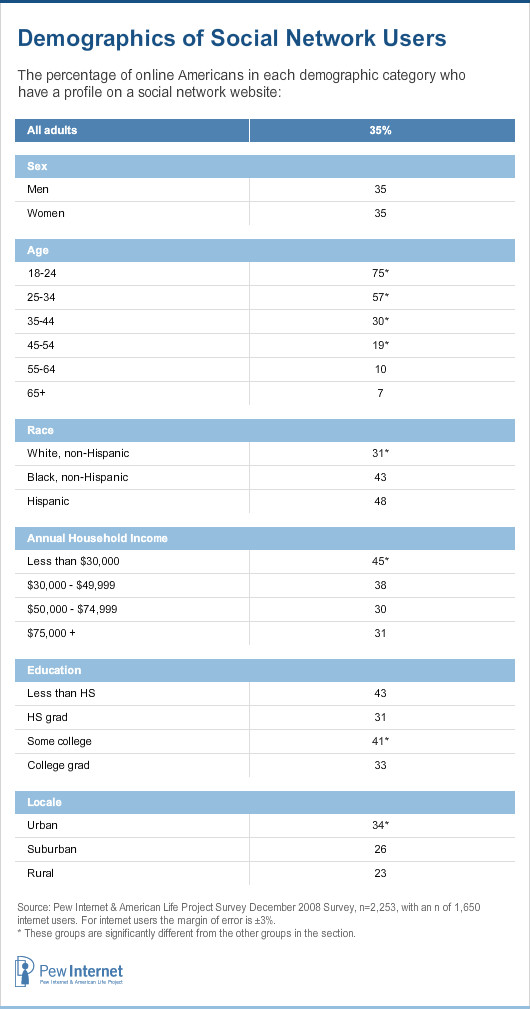 Half of social network users have profiles on MySpace.

Personal use of social networks is more prevalent than professional use. 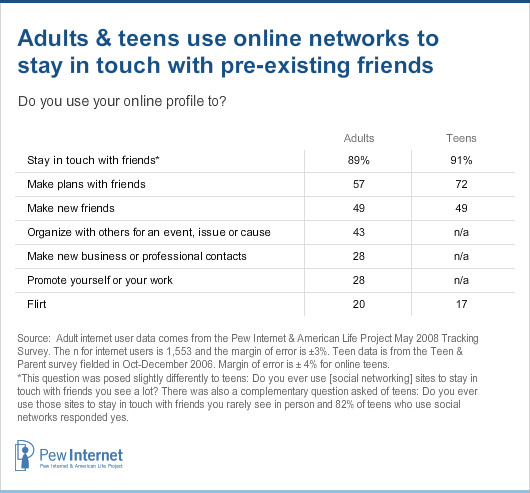 Facebook and MySpace users are similarly focused on personal uses for their online profiles. LinkedIn users are much less likely to say they use the site for personal reasons and much more likely than MySpace or Facebook users to say they use it for professional ones. 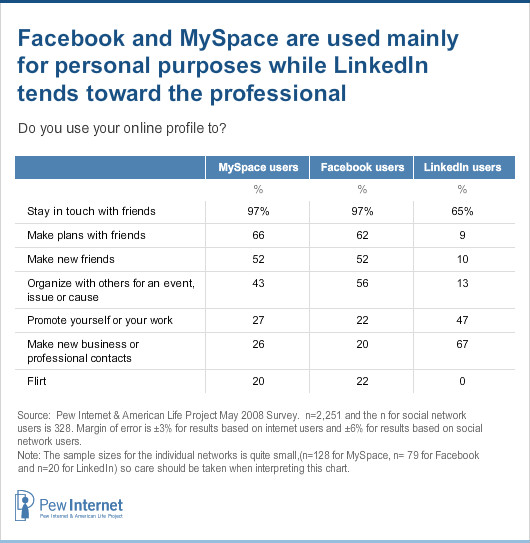 More than one third of social network users visit their profile daily. 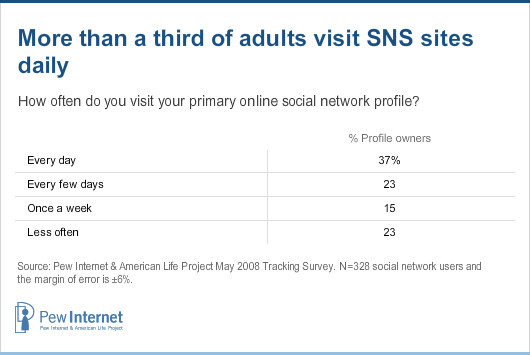 Teens are more likely than adults to visit a social networking profile frequently. Forty-eight percent of teens visit a profile at least once a day, another 32% visit weekly, and 20% visit less often.13

More than half of adult social network users have more than one profile online.

Those with multiple profiles use them to compartmentalize their lives and stay in touch with friends.

But mostly, users have multiple profiles to better keep track of their friends who may be spread across multiple sites. About a quarter (24%) of users with multiple profiles give this as a reason for having more than one profile online. Others have all but abandoned older profiles because of technological advancements or difficulties – moving from an older legacy site (4%) to a newer or different social network site. In many cases, these older profiles are little used, but not necessarily deleted. 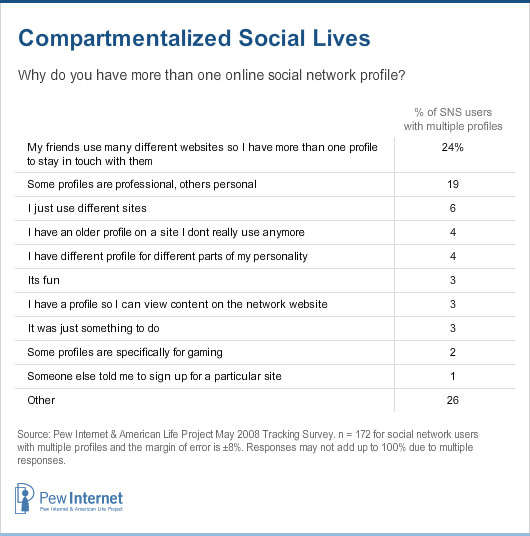 One in ten internet users have deleted an online profile.

When asked why they deleted the profile, adults gave a wide range of reasons.  The largest percentage of users (20%) said that they simply stopped using the profile prior to deletion. Others reported boredom with the profile (16%), dissatisfaction with the social network site (11%) or that the profile was too time-consuming to maintain (6%). Others had more negative experiences, citing too much spam or unwanted contact (8%) or a stolen password or hacked profile (4%) as their reasons for deleting an online social network profile. There were few differences between current profile owners who had deleted a profile and those users who no longer use social networks in the reasons they gave for deleting their profiles. 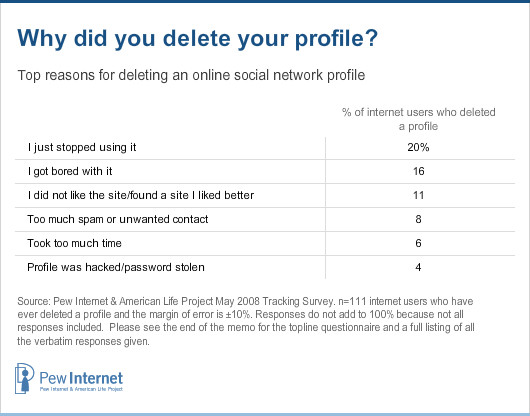 American parents and policy makers have spent a good deal of time recently telling youth to be careful online. They have exhorted teens, particularly young women, to keep personally identifiable information safe and private and Pew Internet surveys have found that many teens are responding to those cautionary words.14 Adults, however, are free to share or not share their personal information as they choose, and in this survey 60% of adults restrict access to their online social network profiles so that only their friends can see the content, while 36% of adults allow anyone to view their online profiles.

Nearly six in ten (58%) adult social network users limit who can see certain information on their profiles, like photos or wall posts, while 39% of adults do not restrict access to certain content on their profiles. Some of these choices will be determined or limited by the tools provided (or not) by the social network the individual uses. Still, there are fewer differences between the users of different networks in their likelihood of restricting access to specific pieces of content on their profile than in general profile privacy restrictions mentioned above. 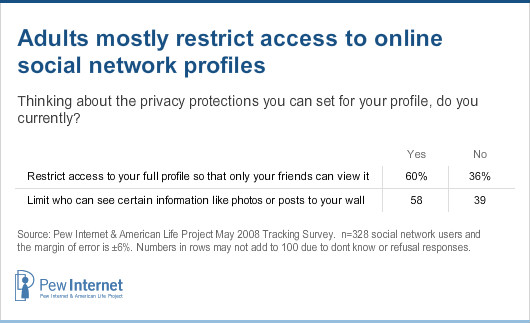 These findings highlight the tension inherent in social network use. A user generally wants to be findable by the people they wish to add to their online network – offline friends, family, contacts and co-workers – but may not wish to be so visible as to be harassed or observed by people totally unknown to them. 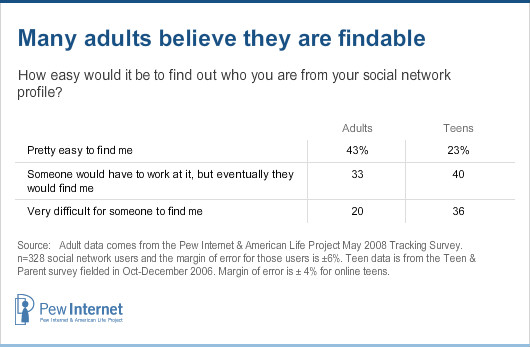 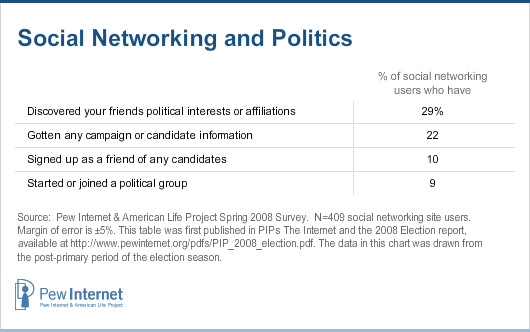 For a more elaborate discussion of these findings on social networks and politics, please see our report The Internet and the 2008 Election at https://www.pewresearch.org/internet/pdfs/PIP_2008_election.pdf, starting on page 10.

Next: About Us, Methodology
← Prev Page
Page1You are reading page2Page3
Next Page →