48% of technology users need help from others with new devices and many tech users encounter problems with their internet connections, home computers or cell phones; As gadgets become more important to people, their patience wears thin when things break

Modern information and communication technologies open doors to a wealth of information. But many users find it difficult to set up these devices and frustrating when they break.  According to a recent survey by the Pew Research Center’s Internet & American Life Project, nearly half (48%) of adults who use the internet or have a cell phone say they usually need someone else to set up a new device up for them or show them how to use it. And many users of various devices and services encounter breakdowns from time to time. Specifically:

Respondents from all demographic groups who own a certain device are about equally likely to have that device fail, but younger cell phone owners are significantly more likely than seniors to have their cell phones break:

How did people deal with tech breakdowns? Some 15% of those experiencing problems with any of the five devices or services listed above said they were unable to fix the problem. However, the majority of users found solutions in a variety of ways:

Users whose technology had failed also reported a mix of emotions during the course of trying to solve the problem:

This data memo is based on a survey of 2,054 adults between October 24, 2007, and December 2, 2007. Some 734 respondents in the survey were technology users who had at least one device fail in the past year.

Electricity was new once, too.

It is often the case that new technologies become popular well before the technology itself is understood by the general public: as these technologies gain traction, it is not always intuitive for new users to know how to use them, much less fix them when they break. And there are always some users who catch on faster than others to new technology.

A new technology becomes mainstream at the time that it becomes easily accessible, affordable, and usable to the general population. Electricity caught on in America around 1880-1920, though it was more or less “discovered” in 1771 and harnessed in 1821. The telephone was invented in 1876, but it did not become widely used in America until the early 1900s. And, while the first American patent for photography was issued for an early version of the camera in 1840, it was not until 1900 that the camera was first mass-marketed.

Nowadays, we are born under bright lights, and flipping the switch when it is dark seems to us common sense. But just over 100 years ago, no one had ever seen light that was not also fire or electricity that was not lightning or static. When the Edison light bulb was introduced in 1880, it was not only a novelty, but it was regarded as a phenomena bordering on the supernatural. People stared in awe, and some fell to their knees in wonder, as the court house in small-town Wabash, Indiana, put on one of the first displays of harnessed electric light.1

When the telephone was taking off in homes in the early 1900s, subscribers were given specific instructions for how to make a call – something we now do automatically several times a day. Instructions given by telephone companies ranged from technical directions, such as speaking directly into the mouthpiece, to proper etiquette, such as avoiding banging the receiver when hanging up.2

The first mass-marketed camera, “the Brownie” was developed in 1900 by George Eastman, the founder of Kodak. The Brownie was the first camera that was truly marketable to the public for two main reasons: it was easy to use and extremely affordable. Unlike its predecessors that had bulky equipment and technical processing requirements, the Brownie could be held in the hand, took a snapshot with the press of a button, and was loaded with film that could hold up to 100 images. The camera initially cost just $1. Because the technology was simple and affordable, anyone, not just professionals, could take photographs – without knowing the slightest about lenses or film.

Most Americans probably still do not know the science behind the flip of a light switch. But they probably know that when the lights are out to check the breaker, and, when the breaker fails to fix the problem, to call the electric company. Nearly all Americans know how to pick up a receiver and dial a seven-digit combination of numbers, but most do not know how those numbers add up to connect their phone with another phone across the country. Similarly, the amateur photographer wielding a point-and-shoot digital camera probably does not fully grasp the physics behind the lenses inside, but he probably knows how to aim and press a button. But when the line is dead or a camera fails to click, many users are likely to contact the telephone company or take the camera to a repair shop.

So where would computers, cell phones, Blackberries, MP3 players and the internet fit in to this picture? Do owners know enough about their Blackberries to fix the devices themselves when they break? Do users know enough about what goes on inside their computers to even know when they need a checkup? Could Americans still get the information they need, or be able to communicate as easily with their friends and family, if their cell phones broke or their internet connection failed?

A home internet connection is the technology most likely to fail, with 44% of home internet users reporting that their internet failed in the past 12 months. Computers are the second most common device to fail, followed by cell phones, Blackberries and iPods. PDAs and MP3 players are the devices least likely to have failed in the past year, and of owners who had multiple devices fail, very few reported that their Blackberries or iPods had been the device to fail most recently.3 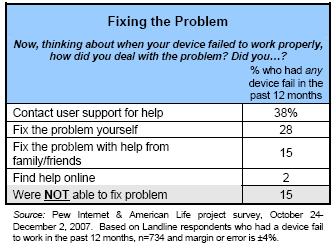 Men (33%) were significantly more likely than women (22%) to fix gadget problems by themselves, while women (18%) were more likely than men (12%) to consult their friends or family for help.

Adults 50 years old and older were much more likely to contact user support for help, but otherwise age did not significantly affect how a respondent fixed his device.

The device that failed did, however, seem to play a role in the respondents’ chosen solutions, and the majority of respondents chose either to fix the device on their own or to contact user support for help.

While fixing a device on one’s own significantly trailed contacting user support as the most popular solution to device failure, those with computer, internet and cell phone problems were equally likely to fix their devices in this way. 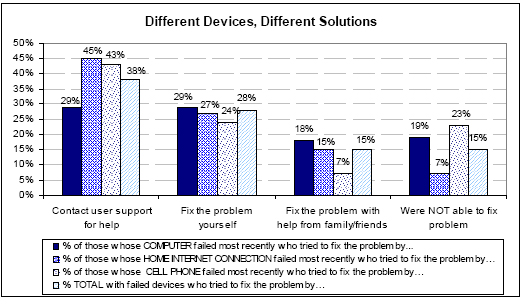 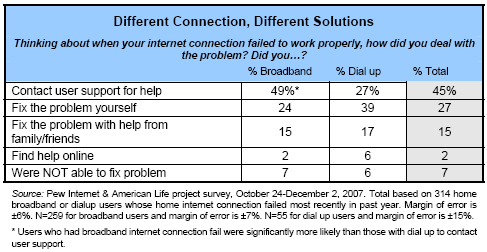 The number of devices that failed a respondent in the past 12 months had no bearing on the way he dealt with the problem. Those who had one device fail were equally likely as those who had two or three problems to try to fix it themselves, for example, or to seek help from customer support.4

During the course of trying to fix their broken technology, respondents reported a variety of attitudes, not all of them stemming from frustration. The majority (72%) of respondents said they were “confident” that they were on the right path during the course of trying to solve the problem. Fewer respondents harbored more negative feelings about fixing their devices: about half (48%) were “discouraged” and 40% were “confused” about the problems. 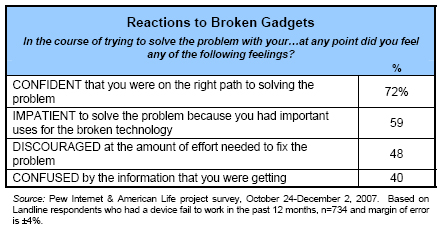 Regardless of whether respondents had their computers, cell phones or internet connections fail, they were equally likely to feel discouraged, confused, confident or impatient during the course of trying to fix the problem. Respondents’ emotional reactions were, however, related to the solutions they chose.

Respondents who fixed gadgets themselves were significantly more likely to report being confident that they were on the right track to solving the problem than to report any other emotional reaction. Fully 82% of fix-it-yourselfers said they were confident, which is also significantly more than respondents who got help from friends or family (64%) or were unable to fix their devices (57%). 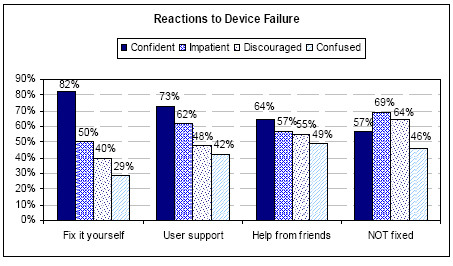 A technology user’s experience and ease with new technologies may play a role in his chosen solution as well as in his attitude during the course trying to solve the problem. Adults who admitted that they need help setting up or learning how to use a new device (48% of internet and cell phone users) are significantly more likely than those who are at ease setting up new device to seek help from family or friends in order to fix a broken device (21% vs. 9%). Those tech users who need help with new devices are also significantly more likely to feel confused (55% vs. 29%) and discouraged (55% vs. 44%) during the course of trying to solve the problem.

The 52% of tech users who are comfortable learning to use new devices on their own are more likely to be independent and confident device fixers. Some 35% of this group, compared with 19% of those who need help with new devices, fixed broken technology on their own; and, 81% of the more tech-savvy group said they felt confident during the course of fixing their devices, while 62% of those who need with devices help felt confident. Both groups, however, are equally likely to contact user support for help and are equally likely to fix their broken devices in the end. 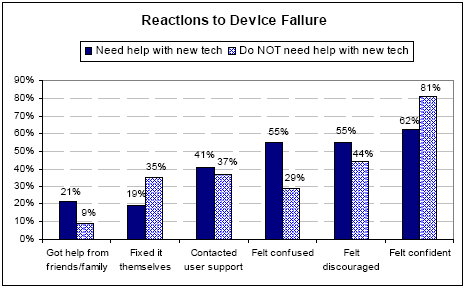 Attitudes are also sometimes associated with age and gender

There were no significant differences in emotional reactions to device failure across income and education groups. 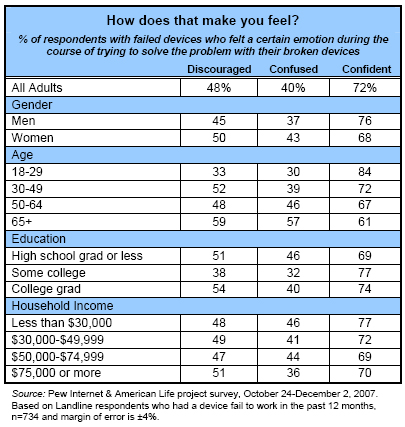 Just get it fixed already!

The majority (59%) of respondents reported being impatient to fix their devices, and the percentage was equal across demographic groups. Adults who are most likely to be impatient waiting for their devices to be fixed are those who had had the most devices fail, those who use their devices most, and those who rely more heavily on their devices for work or information.

When Technology Fails
48% of technology users need help from others with new devices and many tech users encounter problems with their internet connections, home computers or cell phones; As gadgets become more important to people, their patience wears thin when things break
Questions and Methodology