Parent and Teen Survey on Gaming and Civic Engagement

The Parent and Teen Survey on Gaming and Civic Engagement, sponsored by the Pew Internet and American Life Project, obtained telephone interviews with a nationally representative sample of 1102 12- to 17-year-olds and their parents in continental U.S. telephone households. The survey was conducted by Princeton Survey Research International. Interviews were done in English by Princeton Data Source, LLC, from November 1, 2007, to February 5, 2008. Statistical results are weighted to correct known demographic discrepancies. The margin of sampling error for the complete set of weighted data is ±3.2%.

Details on the design, execution and analysis of the survey are discussed below, along with details of the procedures used to code games and their ratings.

Sample Design: The sample was designed to represent all teens ages 12-17 living in continental U.S. telephone households. The telephone sample was provided by Survey Sampling International, LLC (SSI) according to PSRAI specifications. The sample was drawn using standard list-assisted random digit dialing (RDD) methodology. Active blocks of telephone numbers (area code + exchange + two-digit block number) that contained three or more residential directory listings were selected with probabilities in proportion to their share of listed telephone households; after selection two more digits were added randomly to complete the number. This method guarantees coverage of every assigned phone number regardless of whether that number is directory listed, purposely unlisted, or too new to be listed. After selection, the numbers were compared against business directories and matching numbers purged.

Contact Procedures: Interviews were conducted from November 1, 2007 to February 5, 2008. As many as 10 attempts were made to contact every sampled telephone number. Sample was released for interviewing in replicates, which are representative subsamples of the larger sample. Using replicates to control the release of sample ensures that complete call procedures are followed for the entire sample. Calls were staggered over times of day and days of the week to maximize the chance of making contact with potential respondents. Each household received at least one daytime call in an attempt to find someone at home.

Weighting and analysis: Weighting is generally used in survey analysis to compensate for patterns of nonresponse that might bias results. The interviewed sample of all adults was weighted to match national parameters for both parent and child demographics. The parent demographics used for weighting were: sex; age; education; race; Hispanic origin; and region (U.S. Census definitions). The child demographics used for weighting were gender and age. These parameters came from a special analysis of the Census Bureau’s 2006 Annual Social and Economic Supplement (ASEC) that included all households in the continental United States that had a telephone. 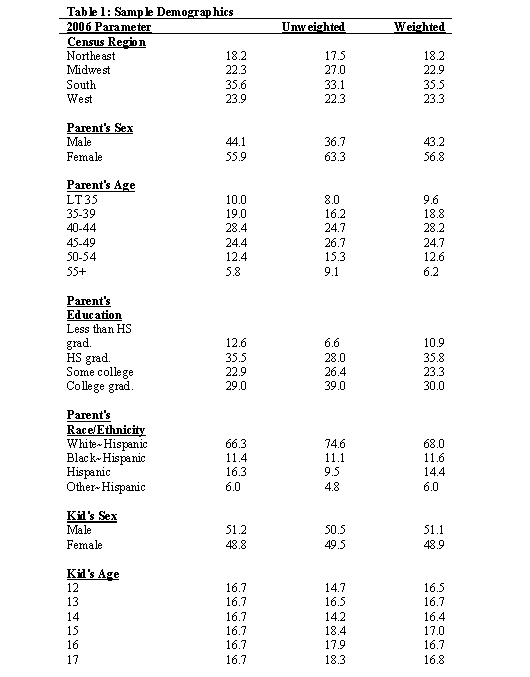 Effects of Sample Design on Statistical Inference: Post-data collection statistical adjustments require analysis procedures that reflect departures from simple random sampling. PSRAI calculates the effects of these design features so that an appropriate adjustment can be incorporated into tests of statistical significance when using these data. The so-called design effect or deff represents the loss in statistical efficiency that results from systematic non-response. The total sample design effect for this survey is 1.17.

The survey’s margin of error is the largest 95% confidence interval for any estimated proportion based on the total sample— the one around 50%. For example, the margin of error for the entire sample is ±3.2%. This means that in 95 out every 100 samples drawn using the same methodology, estimated proportions based on the entire sample will be no more than 3.2 percentage points away from their true values in the population. The margin of error for teen internet users is ±3.3% and for teen game players is ±3.2%. It is important to remember that sampling fluctuations are only one possible source of error in a survey estimate. Other sources, such as respondent selection bias, questionnaire wording and reporting inaccuracy, may contribute additional error of greater or lesser magnitude.

Table 2 reports the disposition of all sampled telephone numbers ever dialed from the original telephone number sample. The response rate estimates the fraction of all eligible respondents in the sample that were ultimately interviewed. At PSRAI it is calculated by taking the product of three component rates:61

Thus the response rate for this survey was 26 percent. 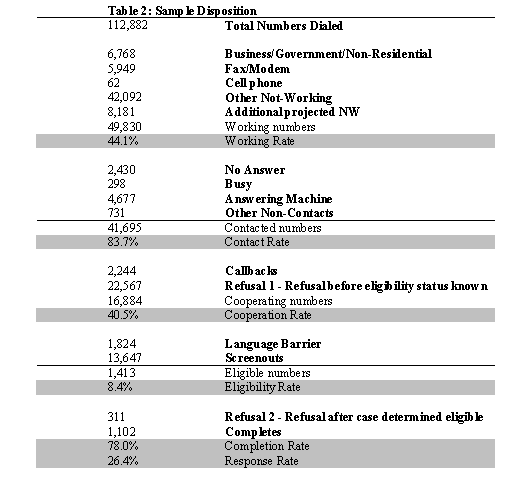 In coding the open ended responses to our “What are your current top three favorite games?” question, we used two people to count the frequency of each of the individual game titles named by the respondents in the survey. The two coders then reconciled their findings to make sure their numbers and their interpretations of the misspelled games were consistent. We then compiled a master list of all of the spelling “transformations” we made as well as a list of responses that we could not find in our game search or found to be ambiguous. We then sorted all of the games into six categories:

The majority of the games in the survey are rated by the ESRB. However, we encountered several problems when we sorted the games and recorded their assigned ratings:

In order to determine the rating for each respondent, we used the list of game ratings that we compiled earlier and averaged the ratings for all of the games that the respondent listed. For respondents who did not list any games, who played games we could not find in our initial search, or who only played unrated online or PC games, we marked them as “9.”

As we noted earlier, one of the more difficult aspects of this coding is that most of the individual games have multiple ratings depending on the devices used to play the game. For instance, The Sims 2 is rated E10+ (meaning it is deemed appropriate for kids age 10 and older) on the Nintendo DS, but the version for the Sony PSP is rated T for teen (meaning the ESRB has deemed it appropriate for ages 13 and older). We averaged the ratings that correlated with the game titles that each respondent listed, but since we do not know which specific device the respondent used to play the game (or whether he or she used multiple devices) the ratings for each game are averages of all the possible ratings for the game title. For further information, see the “Coding Ratings” section. In keeping with our system of converting the ratings to numerical values (ec=0, e=1, e10+=2, t=3, m=4, ao=5), the average game rating for the respondents range from 0-5.

Coding for M- and/or AO-Rated Games

There are many games in our survey with at least one version that has an M or AO rating. In order to track the teens who play these games, we created a variable that kept track of how many games with an M or an AO rated version each respondent plays. This variable is potentially skewed, because as we explained earlier, many games have multiple ratings. This variable assumes that the respondent is playing the version of the game with the M or AO rating. Some of the games have versions with less mature ratings, and we have no way of knowing which version the respondent is playing, or if the respondent plays multiple versions, each with a different rating.

We coded for the top five video game franchises rather than the top five favorite games because analyzing according to franchise yielded larger base sizes, which allows for more in-depth analysis.

In coding for the top five franchises, we created five dichotomous variables with a “1” to indicate if the respondent said they played a game in the franchise, and a “0” if they either did not name a particular game in that franchise, or if they did not provide any game titles.