The number of internet users who go online to look for information about a place to live has grown steadily over the past six years. Now, nearly two in five adult internet users in the U.S. (39%) have done this, up from 34% in 2004 and 27% in 2000.

This means that overall, more than a quarter of all adults in the U.S. (27%) have looked online for information about housing, more than double the overall number of Americans who had done so in 2000 (13%).

Perhaps reflecting their transient stage of life as well as their remarkably intensive use of the internet, 9% of online Americans ages 18 to 29 reported in August that they looked for housing information on a typical day, more than double the percentage (4%) in this age group who said the same thing two years earlier.

Among the factors related to the likelihood of looking online for a place to live, youth is a stronger predictor than connection speed or years of online experience. 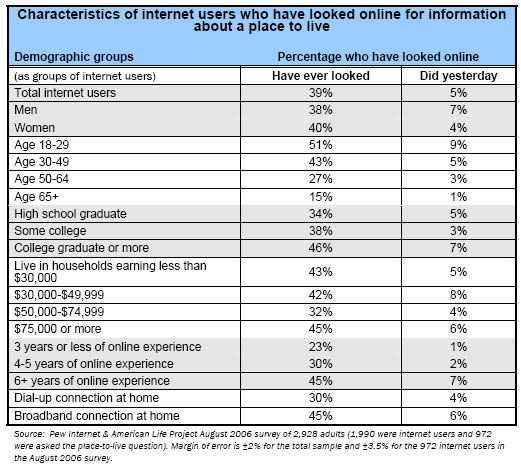 This was an increase from three years earlier, when among a like group of respondents, 62% said internet played no role. Of the 38% who said the internet did play a role, 9% said it played a crucial role; 13% an important role; and 16% a minor role.

Independent data from the National Association of Realtors (NAR) supports the popularity of internet use in looking for housing information online. The NAR reported that over three-quarters of home buyers (77%) in 2005 had used the internet to help in their home search.1

Internet users who are looking for housing information have a vast and growing menu of resources at their fingertips. Much more specific housing information is readily available online than before, including access to Multiple Listing Services, which were formerly in the private domain of realtors, as well as new searchable housing databases, and even housing information on blogs2. Also, layers of cross-referencing applications can help real-estate searchers flesh out their searches with maps, links to community information, monthly mortgage calculation tools, and links to virtual tours or photographs.

Two related data points from our own surveys show that users increasingly make use of internet offerings that might be housing-related: by August 2006, about half of all internet users (51%) have taken virtual tours, up from 45% in November 2004. Also, nearly one third of all internet users (30%) have used online classified ads or sites such as Craigslist, up from 22% in September 2005.