A survey of technology thinkers and stakeholders shows they believe the internet will continue to spread in a “flattening” and improving world. There are many, though, who think major problems will accompany technology advances by 2020.

Technology thinkers and stakeholders assess the future social, political, and economic impact of the internet.

Hundreds of internet leaders, activists, builders and commentators were asked about the effect of the internet on social, political and economic life in the year 2020. The views of the 742 respondents who completed this survey were varied; there is general agreement about how technology might evolve, but there is less agreement among these respondents about the impact of this evolution.

Reacting to several scenarios constructed by the Pew Internet & American Life Project, the respondents struck on several themes and emergent problems in their answers:

Respondents react to seven scenarios about the future.

In the survey, participants were asked if they agreed or disagreed with seven scenarios about the future. They were given the opportunity to elaborate on their answers.

The scenarios – woven from material collected in recent industry and research reports and predictive statements by leaders in science, technology, business and politics – were layered with overlapping elements to spur discussion and elicit nuanced views of the future. They were constructed in a way to provoke responses and conversation. They were not written to reflect the views of the Pew Internet Project or Elon University about the most likely or desirable future. Neither Pew Internet nor Elon takes positions on the policy matters or forecasts the likely impact of technological change. 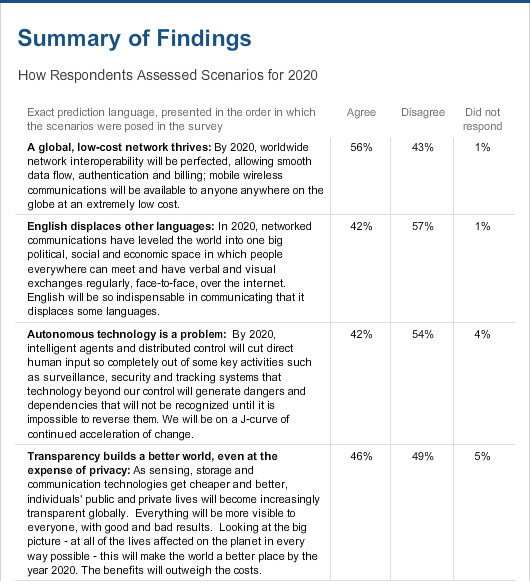 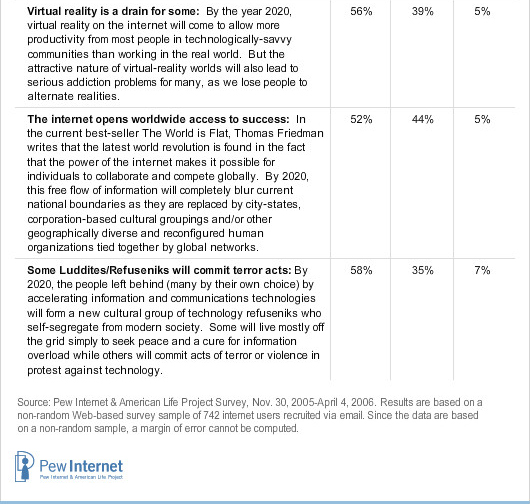 We asked a separate question about setting priorities for future investments in communications technology. Most respondents identified building network capacity and technological literacy as the first or second priority for policy makers and technology leaders to pursue. Another top priority was the creation of a “legal and operating environment that allows people to use the internet the way they want, using the software they want.”

Internet sociologist Howard Rheingold expressed the consensus of the respondents reflecting on the setting of priorities: “Without affordable access, knowledge of how to use the technology, and the legal and operating environment that permits innovation, we won’t see the creative explosion we saw with personal computers and the internet.” Another summary thought came from Internet Society board chairman and Internet Engineering Task Force member Fred Baker: “Education is key to internet deployment and use … I therefore placed it first.”

Thinking ahead to 2020: Some revealing quotations and predictions from the thousands of answers that were submitted to open-ended questions in the survey.

The evolution of smart machines:

The fate of language:

The fate of nation-states:

The allure of virtual reality:

A role for watchdogs:

(Many additional thoughtful and provocative comments appear in the main report.)

Some words about methodology and interpreting the findings.

This is the second specific canvassing of internet specialists and analysts by the Pew Internet & American Life Project.1 While a wide range of opinion from experts, organizations and interested institutions was sought, this survey should not be taken as a representative canvassing of internet experts. By design, this survey was an “opt in,” self-selecting effort. That process does not yield a random, representative sample.

This survey was conducted online and is our best effort to prompt some of the leaders in the field to share their thoughts and predictions. Experts were located in two ways. First, about 200 longtime internet experts were identified in an extensive canvassing of scholarly, government, and business documents from the period 1990-1995. They were invited to respond to a survey of predictions conducted by Pew Internet and Elon in 2003 and they were encouraged to invite other experts to take the initial survey; some 304 did. Those same 304 participants were invited to take this survey and, again, invite respected colleagues join them.

Second, we invited the active members of several noted internet and technology organizations to respond to the survey: The Internet Society, The World Wide Web Consortium, the Working Group on Internet Governance, ICANN, Internet2, and the Association of Internet Researchers.

In the final sample, more than half of the respondents are internet pioneers who were online before 1993. Roughly one quarter of the respondents say they live and work in a nation outside of North America. While many respondents are at the pinnacle of internet leadership, some of the survey respondents are “working in the trenches” of building the Web. Most of the people in this latter segment of responders came to the survey by invitation because they are on the email list of the Pew Internet & American Life Project. They are not necessarily opinion leaders for their industries or well-known futurists, but it is striking how much their views were distributed in ways that paralleled those who are celebrated in the technology field. More detail regarding the respondents is included in the “Introduction” section of the report, and a section with extra biographical data appears at the end of this report.

This report presents the views of respondents in two ways. First, we cite the aggregate views of those who responded to our survey. These answers strike us as most interesting for the fact that there is such disagreement in their views about whether the general direction of technological change will be helpful or harmful to people. Second, we have quoted many of their opinions and predictions in the body of this report, and even more of their views are available on the Elon University-Pew Internet Project website: http://www.elon.edu/predictions/. Scores more responses to each of the scenarios are cited on specific web pages devoted to each scenarios. Those urls are given in the chapters devoted to the scenarios.

This report builds on the online resource Imagining the Internet: A History and Forecast.

At the invitation of Lee Rainie, director of the Pew Internet & American Life Project, Elon University assistant professor Janna Quitney Anderson began a research initiative in the spring semester of 2003 to search for comments and predictions about the future impact of the internet during the time when the World Wide Web and browsers emerged, between 1990 and 1995. The idea was to replicate the fascinating work of Ithiel de Sola Pool in his 1983 book Forecasting the Telephone: A Retrospective Technology Assessment. Elon students, faculty and staff studied government documents, technology newsletters, conference proceedings, trade newsletters and the business press and gathered predictions about the future of the internet. Eventually, more than 4,000 early ’90s predictions from about 1,000 people were amassed.

The fruits of that work inspired additional research into the past and future of the internet, and the Imagining the Internet Website (http://www.elon.edu/predictions/) – now numbering about 6,000 pages – includes results from 2004 and 2006 predictions surveys, video and audio interviews showcasing experts’ predictions about the next 20 to 50 years, a children’s section, tips for teachers, a “Voices of the People” section on which anyone can post his or her prediction, and information about the recent history of communications technology.

We hope the site will continue to serve as a valuable resource for researchers, policy makers, students, and the general public for decades to come. Further, we invite readers of this report to enter their own predictions at the site.

The Future of the Internet II
A survey of technology thinkers and stakeholders shows they believe the internet will continue to spread in a “flattening” and improving world. There are many, though, who think major problems will accompany technology advances by 2020.
Acknowledgments Introduction Scenario One: A global, low-cost network thrives Scenario Two: English displaces other languages Scenario Three: Autonomous technology is a problem... Scenario Four: Transparency builds a better world, even at the expense of privacy... Scenario Five: Virtual reality is a drain for some... Scenario Six: The internet opens worldwide access to success... Scenario 7: Some Luddites/refuseniks will commit terror acts... Funding Priorities: Respondents rank four suggested priorities for building the networked future Reflections Methodology Brief Biographies