Recent research from the Pew Internet & American Life Project shows that, as more and more Americans come online, so too do more Americans rely on the internet for important health information. In a March 2005 survey, 12% of online adults –representative of 17 million people–said the internet played a crucial or important role as they helped another person cope with a major illness. When the same question was asked in a January 2002 survey, nearly the same proportion (10%) said the net played a major role in such circumstances, but that represented only 11 million people.  In addition, the March 2005 survey found the number of those who said the internet played a crucial or important role as they themselves coped with a major illness reached 7 million while a December 2005 survey found that one in five (20%) online Americans said the internet has greatly improved the way they get information about health care.1

Still, while the internet’s role as a health care resource has expanded along with the number of internet users, the web continues to play a substantially larger role in many of life’s other pursuits—such as shopping and hobbies. For example:

So what’s going on here? Does the internet matter less for health than it does for finding that one-of-a-kind iPod case you’ve been hunting for?

The short answer is: it depends on your personal situation. Many Americans are deepening their connections to the internet, whether for entertainment or to help a loved one through a crisis. And while the audience for the latest DVD may be larger than the audience for clinical trial information, the impact on someone’s life in the latter case may be dramatically different in scale. 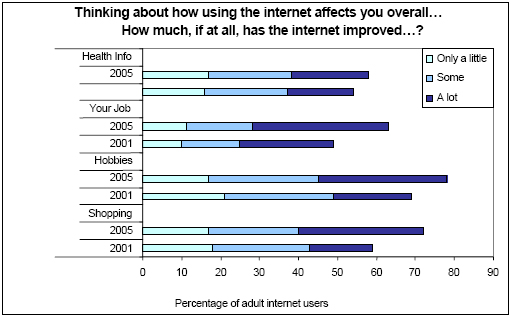 Some measure of the importance of internet access in decisions affecting health can be gleaned from additional questions asked in the December survey, released here for the first time, which focused on significant life decisions or events. In that survey we asked respondents first whether they had helped someone deal with a major illness or health condition within the past two years and, if they had, whether the internet played a crucial role, an important one, a minor role, or no role at all in this event. We then asked “e-caregivers” (those who said they had found the internet to be crucial or important during a loved one’s recent health crisis) about the internet’s specific role during that time.  We found the following:

Just 6% of e-caregivers reported getting from the internet either bad information or advice that made their experience more difficult. By comparison, 91% of e-caregivers said that was not a problem for them.

Since these key sources can be quite varied, we asked e-caregivers to name that one essential source.  Here is a sample of their answers:

This wide range of topics and sources illustrates how powerful a tool the internet can now be for those seeking needed information relating to health and health care. The range of sources extend from in-depth research on medical diagnosis and treatment, expert opinions on specific conditions, access to communities of like-minded individuals, and advice on treatment and adjustment options.  And while many will not need access to that information at any given time, there is clearly a growing population that considers the internet to be a crucial resource.