Internet penetration has now reached 73% for all American adults. Internet users note big improvements in their ability to shop and the way they pursue hobbies and personal interests online

The importance of the internet in key areas is growing

As one measure of the impact of the internet, we have repeatedly asked online Americans whether or not the internet has improved various aspects of their life. Over time, internet users have become more likely to note big improvements in their ability to shop and the way they pursue their hobbies and interests. A majority of internet users also consistently report that the internet helps them to do their job and improves the way the get information about health care. Some key findings are listed below: 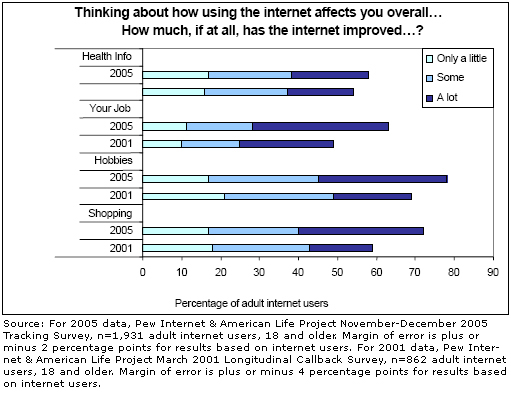 Those who use the internet most cite the biggest improvements

In all four categories (health information, job, hobbies and shopping), the internet earns the highest marks among the most frequent users. For instance, daily internet users are twice as likely to report that the internet improves their ability to do their job “a lot” when compared with those who only go online several times a week (45% vs. 17%). Likewise, 39% of daily internet users report that the internet has improved the way they pursue their hobbies and interests “a lot,” while about half as many (21%) users who go online several times per week say this.

For shopping, younger users are more likely to report big improvements overall, but older users report more growth over time. However, with hobbies, users under the age of 50 report both the most positive effects and the biggest increases since 2001. Those who note the way the internet helps them to do their job report relatively little variation according to age. Only those who are age 65 and older (and likely to be retired) are dramatically less likely to praise the internet’s role in their job. Health care also generally yields comparable positive marks across the generations, with the most change since 2001 registering among the youngest (18-29) and oldest (65+) users.

While the share of internet users who report positive impacts has grown, the sheer size of the internet population also continues to increase. Surveys fielded in 2006 show that internet penetration among adults in the U.S. has hit an all-time high.1 While the percentage of Americans who say they use the internet has continued to fluctuate slightly, our latest survey, fielded February 15 – April 6, 2006 shows that fully 73% of respondents (about 147 million adults) are internet users, up from 66% (about 133 million adults) in our January 2005 survey. And the share of Americans who have broadband connections at home has now reached 42% (about 84 million), up from 29% (about 59 million) in January 2005. 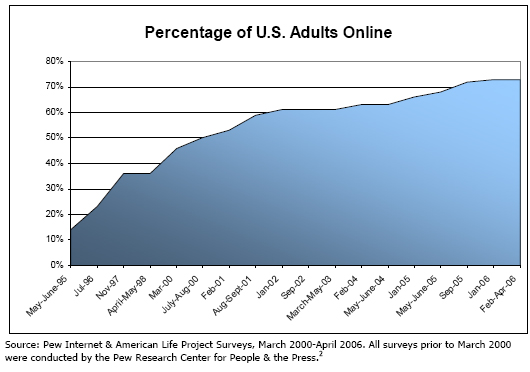 Internet Penetration and Impact
Internet penetration has now reached 73% for all American adults. Internet users note big improvements in their ability to shop and the way they pursue hobbies and personal interests online
About Us, Methodology