Email users get more spam, but the harmful impact of unsolicited messages is diminishing for them

A year after the CAN-SPAM Act became law, email users say they are receiving slightly more spam than before, but they are minding it less. More than half of internet users still consider spam to be a big problem, yet the ill effects of spam on email habits and the overall internet experience have declined.

Compared to a year ago, fewer email users now say that spam is undermining their trust in email, eroding their email use, or making life online unpleasant or annoying. These findings suggest that at least for now, the worst case scenario – that spam will seriously degrade or even destroy email – is not happening, and that users are settling in to a level of discomfort with spam that is tolerable to them.

Users also report that their greatest spam irritant, pornographic email, has declined. On the other hand, 35% of email users now report they have received unsolicited email requesting personal financial information, a spamming technique known as “phishing.”

These are the general findings of a nationwide phone survey of 1, 421 internet users by the Pew Internet & American Life Project between January 13 and February 9, 2005. The margin of error in the survey is plus or minus three points. Here are some of the statistical highlights:

Those who keep tabs on spam report major increases in the volume of spam over the last year. For example, the spam filtering company MessageLabs has reported that in an average month during 2004, spam constituted 73% of email, up from 40% in 2003.1

This differential between very big increases in calculated spam volume on the internet (an 83% increase reported by MessageLabs) and very modest yet statistically significant increases in spam reported by emailers, suggests that for whatever reason – better filters, more filters, better spam avoidance behavior by users – not much of that additional spam is making it to the inboxes of users.

Over the last year and a half, the Pew Internet & American Life Project has been polling internet users about their awareness, behavior, and attitudes toward spam. In a June, 2003, survey, 25% of internet users reported they were using email less because of spam, and 52% said spam made them less trusting of email in general. In addition, some 71% said that spam made being online unpleasant or annoying.

About 8 months later, and two months after the CAN-SPAM Act became law, the negatives intensified, despite the fact that the law was designed to apply restrictions to unsolicited commercial email. Respondents to our survey suggested that users’ frustrations with spam were mounting and the quality of their internet experience was declining. In February, 2004, some 29% of email users said they were using email less because of spam (up 4 points), and 62% said spam had caused them to lose trust in email (up 10 points). And 77% of users said spam made being online unpleasant or annoying (up 6 points). All increases were statistically significant.

Nearly another year later, in January, 2005, the Pew Internet Project again polled internet users on some of the questions about spam. This time, negatives fell back significantly, reverting to their mid-2003 figures or even lower. This suggests the findings from almost one year ago might have represented a spike or a high point, rather than a growing negative trend of the impact of spam on the internet experience. 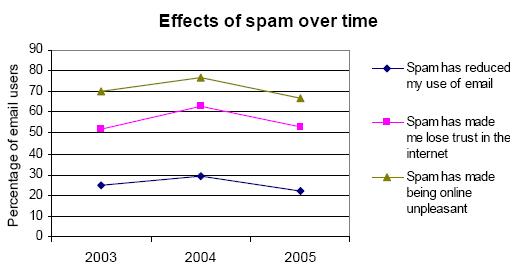 Users are not helping themselves.

There is little evidence that email users have learned more about how to help themselves combat spam. Despite much publicity and press about spam legislation and prosecutions over the last 12 or 15 months, general internet user awareness has changed little. In June, 2003, 57% of users say they had heard “some” or “a lot” about spam. In January, 2005, some 19 months later, that number stood at 60%. The number of those who said they had heard “only a little” remained steady at 26%. Only the number who said they had heard “nothing at all” about spam declined from 17% to 12% over that time.

Email users have changed their spam avoidance behavior very little in the last year and a half. If anything, they have been a little less likely to practice good habits. In June, 2003, 69% of users say they would avoid posting their email addresses to web sites, a common source for spammers to collect email addresses. Now, 64% say so. The number of users who avoid giving out their email addressees or who set up additional addresses for times they might attract spam remained virtually the same. There is one change that suggests more email users are taking the initiative: In June, 2003, 14% of users said they had set up unusual email addresses, which are harder for random name generating spam software to match. That has increased now to 19%.

Still there seem to be enough email users willing to check out the material that arrives in unsolicited commercial email. Some 6% of email users say they have ordered a product or service offered in an unsolicited email, a number that is virtually unchanged from 7% in June 2003 and 5% one year ago. It is certainly a number adequate to make spam profitable for some purveyors.

Again, about 13% of users say that after responding to an email offer, they later learned it was phony or fraudulent, up from 12% in June 2003 and 9% one year ago.

With changing content of spam comes an evolving definition of spam. Spam first hit the stage with “unsolicited commercial email,” where spammers sold products and services ranging from beauty and health-related products to computer software. In June, 2003, 92% of emailers considered unsolicited commercial email from a sender they don’t know to be spam. Now, 87% consider that spam, a significant drop.

Further, In June, 2003, 74% of emailers considered “unsolicited email from a political or advocacy group” to be spam. A year and a half later, months that spanned the 2004 campaign and election cycle which produced an unprecedented volume of political emails, that number had dropped. In January, 2005, 66% percent of emailers considered unsolicited political or advocacy email to be spam, a statistically significant difference.

In 2003, men and women reported equal levels of loss of trust in email because of spam (53% for women and 52% for men). In 2004, those numbers rocketed up. Women (65%) were significantly more likely than men (59%) to say spam was causing them to lose trust in email. Then, a year later, loss of trust levels settled back  significantly, with women a just little higher (54% for women and 51% for men) 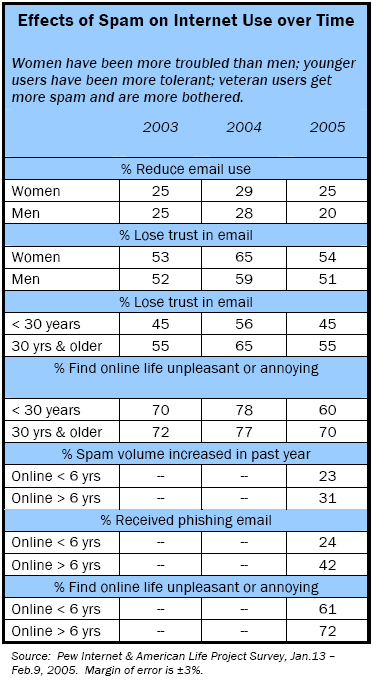 As earlier, those who have been online the longest – the veteran users of at least six years– continue to be the most informed about spam, the most likely to consider any form of unsolicited email to be spam, and the most aggressive about avoiding it. Yet, probably because of their stronger presence online, veteran users still report a slight increase in their spam volume from a year ago. For example, in personal email accounts, some 31% of those who have been online 6 or more years say they are getting more spam than a year ago, compared to 23% of those who have been online fewer years. Further, many more veterans report receiving the newest type of spam, the “phishing” spam where spammers request personal and financial information. Some 42% say they have received such spam, compared to 24% of others. Perhaps the increased spam volumes account for greater numbers of veterans who report that spam is making their online lives unpleasant or annoying. Some 72% of 6 year veterans say this, compared to 61% of others.

The national phone survey covered 2201 American adults, of whom 1421 are internet users and was conducted between January 13 – February 9, 2005. The margin of error on data involving internet users is plus or minus 3 percentage points.

The Pew Internet & American Life Project is a non-profit initiative of the Pew Research Center and is funded by the Pew Charitable Trusts to examine the social impact of  the internet. The project does not advocate any policy outcomes. It is non-partisan.

Spam and Phishing
Email users get more spam, but the harmful impact of unsolicited messages is diminishing for them
Questions and Data