As more Americans use the internet for entertainment, for building personal relationships, and as a tool for conducting business, online rating systems have become a significant element of internet use.

The Pew Internet & American Life Project has found that 26% of adult internet users in the U.S., more than 33 million people, have rated a product, service, or person using an online rating system.  These systems, also referred to as “reputation systems,” are online applications that allow users to express their opinions and read opinions posted by other participants.

The data, collected as part of a tracking survey conducted in May and June, provide new evidence that a substantial number of internet users exploit the two-way communication feature of the internet. The findings also add to the picture we have about the substantial number of Americans who contribute content to the online commons.

An earlier Pew Internet & American Life survey conducted in 2003 showed that 44% of U.S. internet users above the age of 18 have contributed their thoughts and files to the online world.1 This group of users, made up of more than 53 million American adults, has participated in posting photographs, written material, or audio files to Web sites, maintained their own site, ran a Web cam, or undertaken some other method of adding content to the Web.  That same survey found that 13% of internet users have their own Web site and 21% have allowed other users to download files from their computer, including music and video files.

At its best, the use of reputation systems builds community, adds knowledge to groups, and elevates the accountability of the institutions and people who are being rated. Online reputation systems can enable people in making decisions about which users to trust, or to compare their opinions to others’.

These systems are used most commonly to assist with internet commerce for sites such as eBay.com, an electronic marketplace that allows members to market and sell goods and services online.  eBay.com users can read feedback expressed by those who have interacted with a potential buyer or seller prior to making their own decisions.  Other sites, such as epinions.com and Amazon.com, allow internet users to review a host of products and for others to respond to those reviews.  Further sites, such as RateMyTeachers.com and Amihot.com, apply variations of the online reputation model to people, rather than products or ease of transactions.  At its worst, the use of reputation applications can be wounding and cruel. 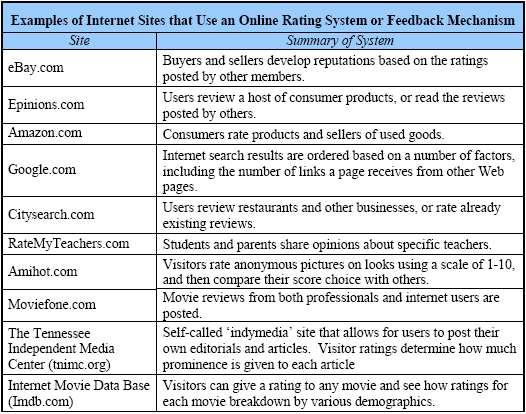 While the survey data show that internet users who have participated in an online rating system come from many different demographic groups, there is evidence that certain groups are more likely to have taken part.  Among those who are most likely to have rated something online: 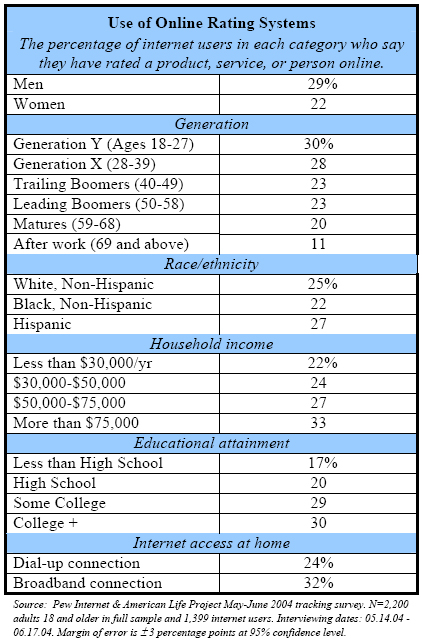 Individuals who have rated something online are also more skeptical of the information that is available on the Web.  Thirty-nine percent of those who believe that search engines are not fair and unbiased have participated in an online rating system as compared to 28% of those who do believe search engines are fair.  Additionally, those who are “very confident” in their own internet searching abilities are more likely to have posted a rating compared to those who are either “not too confident” or “not at all confident” in their own abilities, 35% to 11%.

While the 2004 Pew Internet & American Life survey shows that a quarter of internet users have rated something online, results from the same survey demonstrate that online rating systems are still less utilized than some types of internet activities.  For example, 93% of internet users send email, 84% use an online search engine, and 42% send instant messages.

However, the number of users who have posted a rating online is comparable to the numbers of internet users who have participated in other common online activities.  The 26% of internet users who post ratings is roughly the same amount as the 29% who listen to live or recorded radio broadcasts over the Web, and slightly more than the 20% that download music files onto their own computer.

These figures come from a Pew Internet survey of 1,399 internet users in a nationwide phone survey that was conducted from May 14 to June 17, 2004.  The margin of error was plus or minus three percentage points.

The Pew Internet & American Life Project is a non-profit, non-partisan research organization funded by the Pew Charitable Trusts to examine the social impact of the internet. The Project does not advocate on any policy issues.