On the probable eve of Google’s initial public offering, new surveys and traffic data confirm that search engines have become an essential and popular way for people to find information online. A nationwide phone survey of 1,399 Internet users between May 14 and June 17 by the Pew Internet & American Life Project shows:

comScore Networks tracking of Internet use shows that among the top 25 search engines:

Pew Internet Project research over the years has consistently shown that the use of search engines is one of the most popular online activities. During most months, the act of using a search engine is second only to email as the most frequently performed Internet activity. (During periods when major news stories occur, the act of getting news online surpasses search engines by a small margin. But nothing in our research has ever come close to matching the popularity of email.)

Some 84% of Internet users, more than 107 million Americans, report that they have used search engines. The volume of searches is impressive. comScore data show that an average Internet user performs 33 searches per month, adding up to well over 3.9 billion searches overall per month on the Internet’s 25 most popular search engines.

Pew Internet Project data show that on any given day, more than half of all Internet users who are online will use a search engine. About 64 million American adults are online on a typical day and more than 38 million of them are using search engines.

Moreover, the frequency of searching is impressive, too. More than a third of searchers (35%) report they launch a search at least once a day, (with two-thirds of that group reporting that they use search engines several times a day.) Another third search a number of times during the week (half search 1 – 2 days a week and half search 3 – 5 days a week). The final third search less frequently than that.

The imperatives of search

The availability of reliable, easy-to-use search engines has transformed people’s connection to information. For some, search engines are indispensable. Many people deeply rely on search engines to deliver vitally important information to them: 44% of searchers say that all or most of the searches they conduct are for information they absolutely need to find.

As part of a survey to understand customer satisfaction among search engine users, comScore asked participants which search attributes are most important to them and how the search engines they use most often rated on each of these attributes. The survey found that while users’ overall satisfaction levels with search engines are relatively high, there are significant gaps between respondents’ most important attributes and the perceived performance of search engines in these areas. For example, 91% of respondents rated “Returns results that match your needs” as either important or very important, but only 66% reported that this statement describes their favorite engines. The biggest gap between attribute importance and the extent to which the search engines are perceived to deliver is “Knowing that personal information will not be shared without permission.” Fully 85% of users rate this as an important attribute, but only 55% believe search engines deliver. 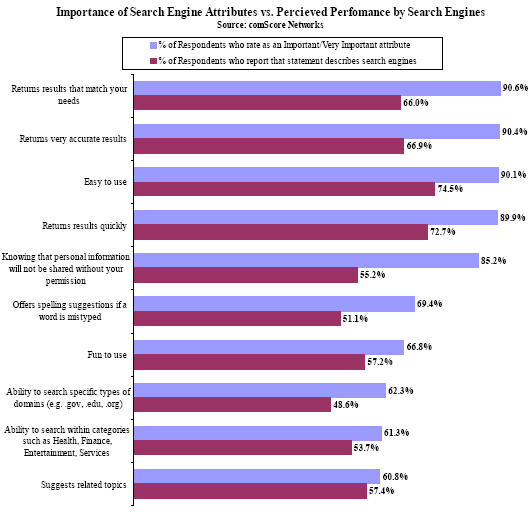 Next: Questionnaire
← Prev Page
You are reading page1Page2
Next Page →