On the whole, Religion Surfers are present in all segments of society. They are fairly evenly spread out among men and women, blacks and whites, various age groups, and various economic and educational-attainment levels.5 Unlike many other online activities, the act of getting religious or spiritual information online is not strongly related to an Internet user’s level of experience. In many other activities, online experience correlates to higher level of participation in the activity – such as getting news online, or purchasing goods online, or doing work-related research online. This is not the case with Religion Surfers. 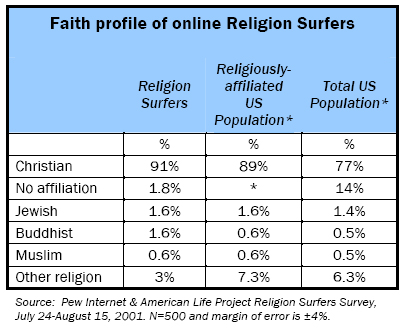 The Religion Surfers we surveyed parallel the religious profile of the American population at large. Christianity predominates among American Religion Surfers, but the group also includes a mix of religious minorities such as Unitarians, Baha’I, Taoists, and Pagans.

The traits that shape Religion Surfers

The most interesting differences among Religion Surfers appear when they are asked about aspects of their religious history and their spiritual practices. A few distinct groups emerged whose patterns of belief and surfing presented different pictures of faith online. These are:

The groups are not mutually exclusive; there is some overlap among them. Still, we find that the distinctions provide useful ways to examine the differences in the Religion Surfer population.

“Active Seekers” are those who log onto the Internet to get religious material daily or at least several times per week. By contrast, less active Religion Surfers access religious material on average less than once a week. The Active Seeker group is diverse – it runs the gamut on age, income, race, education, and Internet experience.

Active Seekers have incorporated Internet-related devotion into lives that are already richly devout. They are more likely than less-active Religion Surfers to describe their religious commitment as “very strong” (88% vs. 78%). They are more likely to belong to a church or other religious community (90% vs. 82%) and more likely to spend time at that church. Fully 65% of Active Seekers claim to be “very involved” in their places of worship, and 58% attend religious services more than once a week. Only 33% of those who are less active online attend so often. In addition to participating heavily in communal life, Active Seekers practice private prayer and meditation more often than others. Fully 70% pray at least once a day, compared to 53% of less active seekers praying that often.

Active Religion Surfers are also more likely to classify as “very important” seven out of ten items in our list of spiritual practices, including prayer, worship, volunteering, small group study, confession, conversations with spiritual advisors, and even going online for religious purposes. 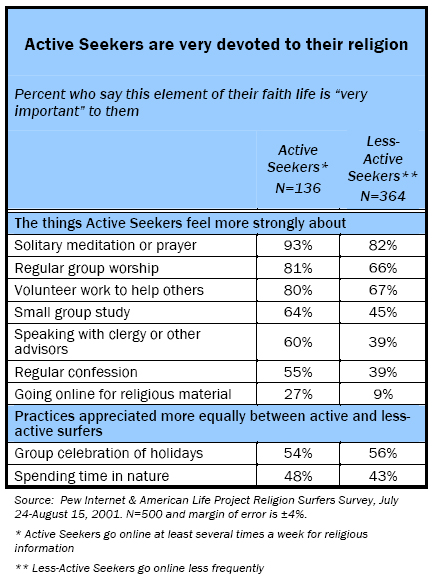 These patterns show those who are already highly devout and have Internet access are likely to transfer their devotional interests to their surfing habits.  While we cannot speculate on what makes any individual devout, we have found that Active Seekers are more likely than the rest of the Religion Surfer population to have converted from the faith in which they were raised (44% vs. 33%).

Converts: 36% of the Religion Surfers population

Converts are those who now practice a faith different from that which they practiced at age 16.  Conversions include those within a larger faith, say a Protestant Christian who becomes chrismated (anointed with oil to mark their reception into the church) into the Orthodox Church, as well as complete changes of tradition, such as a Catholic who turns to Buddhism.  The opposite of a Convert is someone we call a Faith Loyalist – that is, a person who has stuck with the faith tradition in which she was raised. As with Active Seekers, Converts largely mirror the demographic attributes of those who have remained with their original faiths

Converts surf for religious material somewhat more frequently than Faith Loyalists, and are especially appreciative of the Internet’s ability to provide quick access to educational resources. Fully 71% of Converts say it would be easier for them to find such resources online than offline.

Converts’ devotion across a range of practices appears mixed. Converts are more likely than Faith Loyalists to say they have a strong religious commitment (84% vs. 79%) and are more likely to attend services more than once a week (47% vs. 36%) despite being less likely to belong to a formal church or religious group (79% vs. 89%). However, Converts are also more likely than Faith Loyalists to have used the Internet to look for a new congregation by a margin of 19% to 11%. Convert and Faith Loyalist alike are committed to the practice of individual prayer and meditation, 85% of each professing to do so at least once a day.

Members: 84% of the Religion Surfers population

Members are those who belong to a church, synagogue, temple, or other formal worship group.  Members are overwhelmingly women, by a 61% to 39% margin.  They are more likely than non-members to find spiritual practices to be “very important” except for “spending time in nature,” where non-members beat them out 63% to 41%. 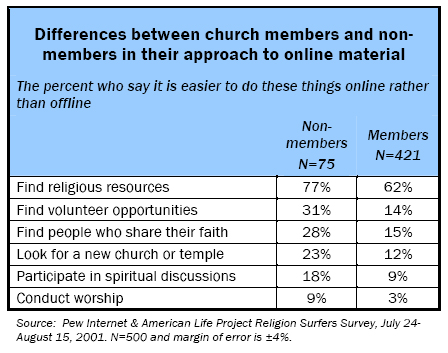 Non-members are more likely than Members to have used the Internet to look up information on faiths other than their own (61% to 48%), and, ironically, to look for a new church or congregation (24% to 12%). Members, on the other hand, are more likely to use the Internet for activities that might be more comfortable for those already in religious communities – such as giving spiritual advice, planning religious activities, and making prayer requests.

In a country in which 89% of the religious population considers itself Christian, there are bound to be people who feel their faith puts them outside of the mainstream.  Given the diversity of Christianity, many “minority” Christians might also feel disaffected.  We classified a group of “Religious Outsiders” based on responses to three questions: whether they feel their religion is widely accepted in this country, whether there are many people of their own faith in their communities, or whether they believe they have run up against religious discrimination. Those who provided responses that showed some level of alienation in two out of three of those questions were placed in the Outsider category.

Religious Outsiders span all ages, races, education and income levels.  They are less likely than Insiders to be Christian, but still, 74% of Outsiders say they are Christian. Our sample included 15 members of faiths other than the major Western religions, 73% of whom considered themselves outsiders.  By contrast, only 8% of Christians consider themselves Outsiders.

Outsiders and insiders are surprisingly similar.  They profess commitment to their faiths equally (about 80% of each group claims “very strong” faith), and are equally likely to consider “very important” most of the spiritual practices we asked about. Outsiders are less likely than insiders to belong to a formal congregation (66% vs. 87%). It is not surprising, then to note that formal group worship is less important to Outsiders than to insiders (57% vs. 72%). In addition, Outsiders are more likely than insiders to extol the virtues of spending time in nature (64% vs. 42%).

Next: Part 2: What Religion Surfers do online
← Prev Page
Page1Page2Page3You are reading page4Page5Page6Page7Page8
Next Page →