More than 9 million women have gone online for the first time in the last six months and this surge has led to gender parity in the Internet population. It has also reshaped America’s social landscape because women have used email to enrich their important relationships and enlarge their networks. The Internet has the opposite of an isolating effect on these users. They report that email has helped them improve their connections to relatives and friends. More than men, women say they are attached to email and pleased with how it helps them.

Connecting the family, extending it, and celebrating it

Internet tools broaden users’ social worlds. In general, Internet users have more robust social lives than non-users and the most fervent Internet users are the ones who more frequently say email use has improved their bonds with relatives. Millions have used the Internet to rekindle relationships and locate long lost relatives and friends. They also report that they have learned more about their families on the Web.

The use of email is changing how some families interact. It has increased communication in some relationships and perhaps been used as a substitute for conversation in others.

Some family communications now revolve as much or more around email as they do on conversation.

Among those who email a family member, 40% communicate with that person by email more than they phone

Siblings who have an email relationship send email much more often than they phone each other – 69% of these siblings email each other once a week or more often; 44% of them phone their siblings that often

Daily activities on the Internet:

At the same time, there are a striking number of online activities that are performed in equal measure by men and women. These often involve Web activities that are very popular with young adults. Many of these activities probably attracted young men and women to the Web in the first place. The Internet’s special communications methods like chat rooms and instant messages are used in equal proportion by men and women. Browsing the Web for fun is a leisure pursuit for twenty-somethings of both sexes. There is no gender-based difference in use of the Web when it comes to doing school-related research or job-related research. The Web is a popular tool among the young of both sexes for accessing popular culture by downloading music or getting information about movies, books and other leisure activities. And convenience activities online such as arranging travel and banking are also equally popular with men and women.

This report is built on the findings of an innovative tracking survey of Internet activities, which was designed to get an accurate reading on the impact of the Internet on Americans’ lives. Running continually since March 1, 2000, the daily poll has asked thousands of Internet users not only about what they have ever done online, but also about what they did “yesterday.” Using a daily sample design, this approach measures the scope of Internet activities more accurately than conventional surveys because it focuses on activities that are fresh in respondents’ minds. It also provides new insights into the range of online behavior that occurs daily. Overall, here is the picture of an average day on the Internet that emerges from the Internet Life survey, which involved interviews in March with 3,533 Americans, some 1,690 of whom are Internet users: 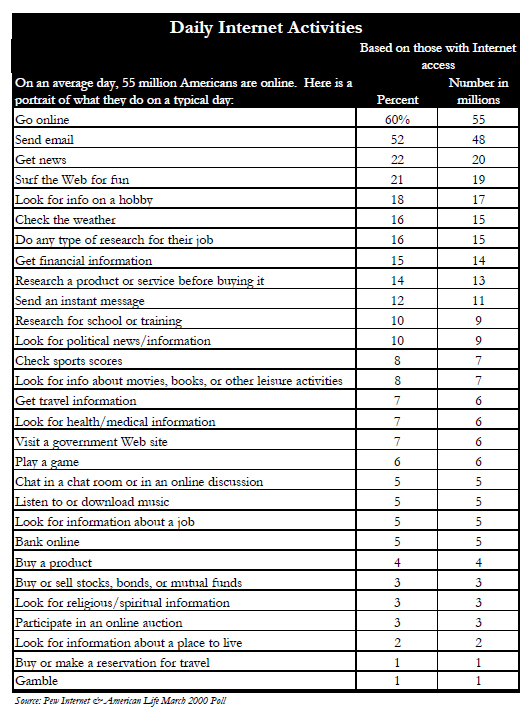 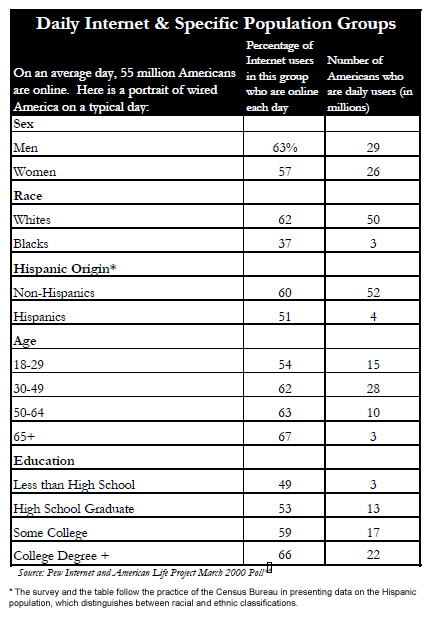 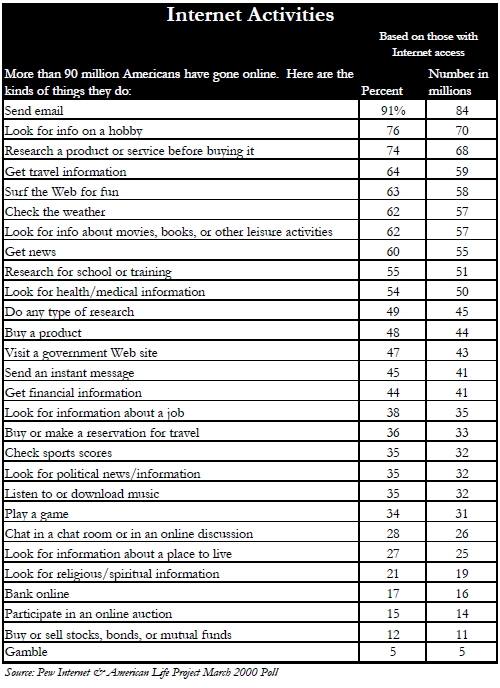 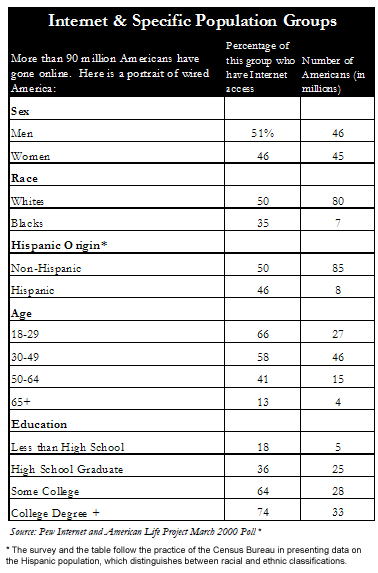