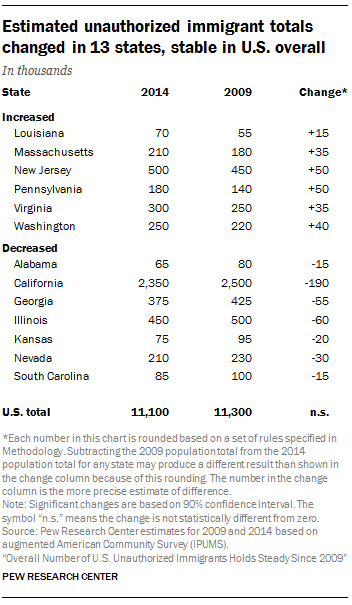 Unauthorized immigrant populations rose in six U.S. states and declined in seven from 2009 to 2014. 2

Unauthorized immigrant populations can rise or fall for a number of reasons. Immigrants may cross the border into a country, decide to leave the country or move from one state to another. Some immigrants die (a small number, because this is a young population as a group). Population totals also can decline when unauthorized immigrants are deported or convert to legal status.

The overall number of unauthorized immigrants grew in six states from 2009 to 2014. In five of them – Massachusetts, New Jersey, Pennsylvania, Virginia and Washington – the increase was due to rising numbers from nations other than Mexico. In the sixth state with an overall increase – Louisiana – the number of unauthorized immigrants from Mexico grew, while the number from other nations did not change.

Although Mexico is the origin country for just over half (52%) of unauthorized immigrants in the U.S., there are 14 states where Mexicans account for 70% or more of unauthorized immigrants as of 2014. All but Kansas, Illinois and Wisconsin are in the West, Southwest or Mountain West. The top three include New Mexico (91%), Idaho (87%) and Arizona (81%). (See appendix tables and maps for details.)

The size of state unauthorized immigrant populations ranges from less than 5,000 in Maine, Montana, North Dakota, Vermont and West Virginia, to 2.35 million in California. 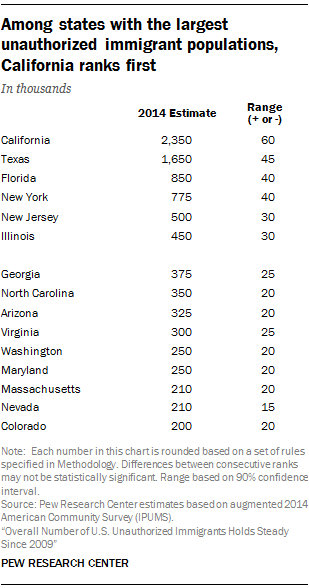 Nationally, unauthorized immigrants account for about a quarter (26%) of all immigrants, but that share varies widely by state. In several states, the shares are 40% or more – 48% in Arkansas, 42% in Idaho and 43% in North Carolina and 41% in Oklahoma. At the other end of the spectrum, in Maine and Vermont, the shares are 8%. (See appendix tables and maps for state totals, shares and duration of residence.) 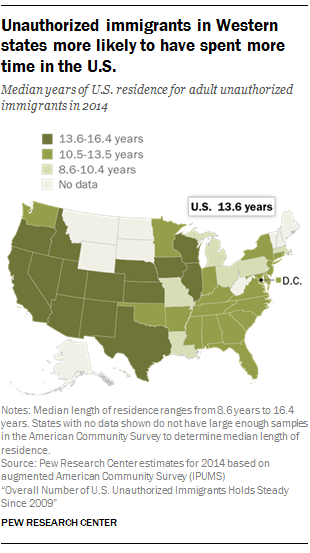 Overall, unauthorized immigrant adults have lived in the U.S. for a median of 13.6 years as of 2014 – meaning that half have lived in the country for longer and half for less time than that. Another way to look at length of residence is that at least half of U.S. unauthorized immigrants arrived in the country in 2000 or earlier. But median length of residence varies widely among states, from 8.6 years (Hawaii) to 16.4 years (Idaho). 4

Among the 14 states with a median length of residence at or above that for the U.S. overall, eight are in the West. These long-duration states include California, home to the nation’s largest population of unauthorized immigrants, where the median length of U.S. residence is 15.6 years, meaning that at least half of these adults have lived in the U.S. since the late 1990s.

States where populations of unauthorized immigrants have lower median years of residence are more geographically dispersed. Only five states have a median length of residence that is less than 10 years. They include Ohio (median 9.5 years), Missouri (9.4 years), Massachusetts (9.4 years), Louisiana (9.1 years) and Hawaii (8.6 years).

Next: Acknowledgments
← Prev Page
Page1Page2You are reading page3Page4Page5Page6Page7Page8
Next Page →