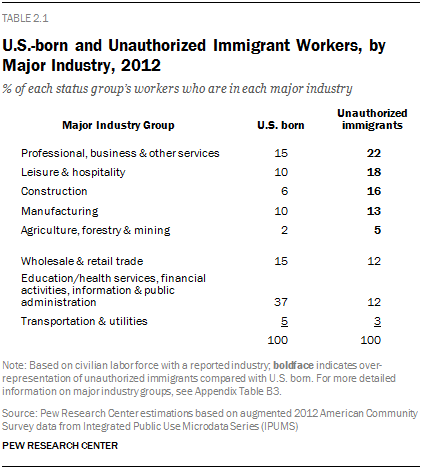 Unauthorized immigrants are more likely than U.S.-born workers to be employed in industries that offer low-skilled jobs, due in part to their relatively low education levels and to limits of their status. Of all unauthorized immigrant workers, 22% are in professional, business and other services, which encompasses a wide range of businesses from legal services and advertising, to employment services, landscaping and waste management, to personal services such as dry cleaning, nail salons, car washes and religious organizations.3 Some 18% are in the leisure and hospitality sector, and 16% are in the construction industry. More than half (55%) of unauthorized immigrant workers are employed in these three sectors, compared with only 31% of U.S.-born workers. 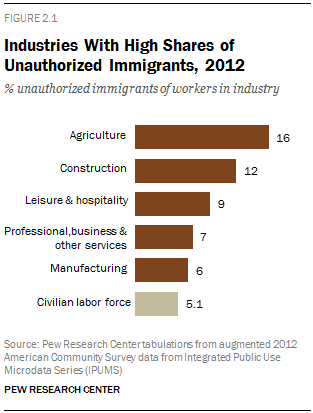 Unauthorized immigrants are particularly concentrated in some subsets of each major industry. In 2012, they represented 24% of workers in the landscaping industry, 23% of those in private household employment, 20% of those in apparel manufacturing, 20% in crop production, 19% in the dry cleaning and laundry industry and 19% of those in building maintenance.

In a change from an earlier pattern of sharp increase, the number of unauthorized immigrants working in the construction sector and manufacturing industry fell from 2007 to2012.

The industry concentrations of unauthorized immigrants vary across the states, depending, in part, on the countries of origin of the immigrants and the nature of each state’s economy.4

Looked at another way—using the unauthorized immigrant share of each industry’s workforce—the picture of industry concentration changes somewhat.

In almost half of the states (21 of 43), agriculture is the industry with the largest share of total workers who are unauthorized immigrants; in 10 other states, agriculture is the industry with the second largest share of workers who are unauthorized immigrants. These 31 states are spread across all regions of the country. The agriculture industry ranks first in this regard in every Western state for which data are available, except Alaska and Nevada; in Nevada, it ranks second, behind construction.

Next: Appendix A: State Maps and Tables
← Prev Page
Page1Page2You are reading page3Page4Page5Page6
Next Page →