When it comes to public libraries, immigrant Hispanics pose both a challenge and an opportunity to the library community. On the one hand, this group, which makes up half of the adult U.S. Hispanic population, is less likely than other Americans to have ever visited a U.S. public library and is much less likely to say that they see it as “very easy” to do so. At the same time, Hispanic immigrants who have made their way to a public library stand out as the most appreciative of what libraries have to offer, from free books to research resources to the fact that libraries tend to offer a quiet, safe space. And they are more likely than other groups to say that closing their community library would have a major impact on their family. These are some of the findings of this latest installment of the Pew Research Center’s reporting on the Center’s landmark 2013 Library Services Survey.

One reason immigrant Hispanics may find public libraries more difficult to use is their language use or skills—more than half are Spanish-dominant, according to recent Pew Research Center surveys of Hispanics.1 As a result, the availability of Spanish-language materials at public libraries may be a reason, though the 2013 library survey did not ask about either measure.

When it comes to using public library websites, 24% of immigrant Hispanics say this would be “very easy” to do so, a share below that of U.S.-born Hispanics (42%), whites (51%) and blacks (47%) who same the same. This difference in use between foreign-born Latinos and U.S.-born Latinos, whites and blacks may reflect the gap in internet access between immigrant Latinos and others. According to the 2013 Library Services Survey, 75% of immigrant Latinos use the internet while 92% of U.S.-born Latinos, 87% of whites and 81% of blacks are internet users.2 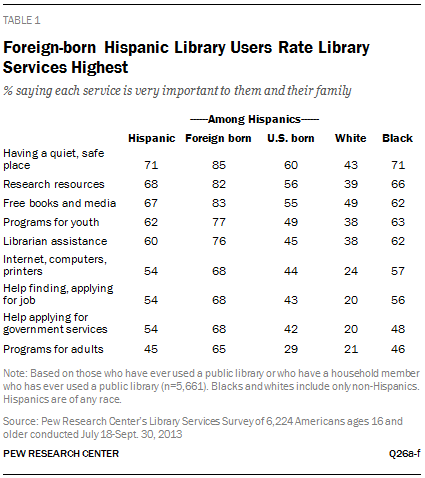 There are more than 17,000 public libraries and bookmobiles nationwide, which together serve 96% of the U.S. population. In fiscal year 2010, libraries circulated some 2.5 billion materials, which include books along with many other materials such as DVDs and e-books (Swan et al., 2013). But public libraries have seen their role shift as they also become a community center and hub for technology (Zickuhr, Rainie and Purcell, 2013), offering a range of services for their users.

Nonetheless, Latinos who have ever used a library or have household members who have done so are more likely than whites to say that services libraries offer beyond book lending are important. This is especially true among immigrant Latinos, who are as much as three times as likely as whites to say this. For example, among library users, 85% of immigrant Latinos say that offering a quiet, safe place to spend time, read or study is a “very important” service offered by public libraries for themselves and their families. By contrast, 60% of U.S.-born Latinos, 71% of blacks and 43% of whites say the same. The gap between immigrant Latinos and whites is largest on services such as help finding and applying for a job and help applying for government programs, permits or licenses. Two-thirds (68%) of immigrant Latinos say each of these library services is very important for themselves and their families. Among whites, just 20% say the same about each service. 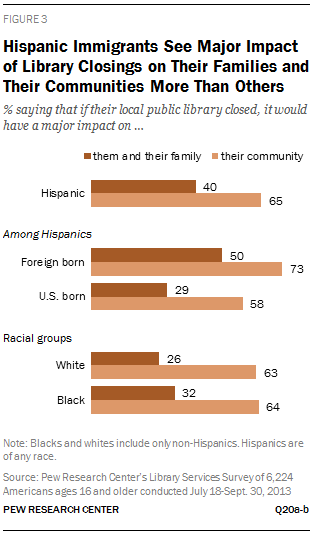 Perhaps because of the importance of library services for Latino library patrons, Latinos overall are more likely than whites or blacks to say library closings would have a major impact on themselves and their families.

Among those ages 16 and older, 40% of Latinos say this, compared with 26% of whites and 32% of blacks. But here, too, the difference is driven entirely by foreign-born Latinos, half of whom say library closings would have a major impact on themselves and their families, while U.S.-born Latinos’ response is much more like the rest of the population (29% say that the closing of their local public library would have a major impact on their family).

When it comes to the impact the closing of their local public library would have on their community, two-thirds (65%) of Hispanics say the impact would be a major one, a similar share to that of whites (63%) and blacks (64%). However, immigrant Hispanics are the most likely to see an impact on their community. Some 73% say this, compared with 58% of U.S.-born Hispanics.3 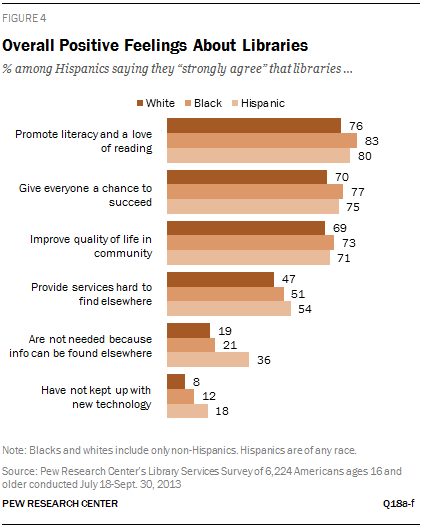 Overall, Hispanics have strongly positive feelings about the role of libraries in their communities, just as other Americans do. However, Hispanics are more likely than others to say that public libraries are becoming obsolete as a tool for finding information.

For example, eight-in-ten (80%) Hispanics “strongly agree” that libraries are important because they promote literacy and a love of reading, a share similar to that of blacks (83%), and somewhat higher than that of whites (76%), who say the same. All three groups also strongly agree that public libraries play an important role in giving everyone a chance to succeed because they provide free access to materials and resources, though again the share is somewhat higher among Hispanics (75%) and blacks (77%) than it is among whites (70%). And 71% of Hispanics, 69% of whites and 73% of blacks strongly agree that public libraries improve the quality of life in a community.

Among Latinos, there are some differences between the U.S. born and immigrants in their views of the roles of public libraries. For example, while 44% of U.S.-born Latinos strongly agree that libraries provide many services hard to find elsewhere (a share similar to the 47% of whites who say the same), 63% of immigrant Latinos express the same views. When it comes to whether public libraries improve the quality of life in a community, 77% of immigrant Latinos strongly agree that they do, while 65% of U.S.-born Latinos strong agree.

The nation’s Hispanic population is its largest minority group. Today more than 54 million Hispanics live in the U.S., making up 17% of all Americans (U.S. Census Bureau, 2014). Hispanics are also younger than other groups. Among Hispanics the median age is 27 years, which drops to 18 years among U.S.-born Hispanics (Brown and Patten, 2014). By comparison, the median age for non-Hispanic whites is 42 years.

These findings are based on a nationally representative survey of 6,224 Americans ages 16 and older, including 739 Hispanics. It was fielded July 18-Sept. 30, 2013 in all 50 states and the District of Columbia in English and Spanish on landline and cellular phones. The margin of error for the Hispanics sample is plus or minus 3.9 percentage points at the 95% confidence level.

Among the report’s other main findings:

Who are Hispanic Library Users?4

This report explores patterns of public library use among Hispanics ages 16 and older and their attitudes, opinions and views about the role of public libraries in their communities, the services public libraries offer, and the impact library closings would have on themselves and their families. It is part of a larger research effort by the Pew Research Center that explores the role libraries play in people’s lives and in their communities. The survey data used in this report were underwritten by the Bill & Melinda Gates Foundation.

Findings in this report are based on a nationally representative survey of 6,224 Americans, including 739 Hispanics, ages 16 and older. The survey was fielded in all 50 states plus the District of Columbia from July 18 to Sept. 30, 2013 by Princeton Survey Research Associates International for the Pew Research Center. It was conducted in English and Spanish on landline and cellular telephones. The margin of error for the full sample is plus or minus 1.4 percentage points at the 95% confidence level and for the Hispanic sample is plus or minus 3.9 percentage points. Unlike standard Pew Research Center surveys of adults 18 and older, this report also contains findings for Americans ages 16 and 17. However, any analyses of behaviors based on educational attainment levels exclude this younger group and are based solely on adults ages 18 and older. For more information, see the methodology description in “How Americans Value Public Libraries in Their Communities” (Zickuhr, Rainie, Purcell and Duggan, 2013).

“U.S. born” refers to those who say they were born in the United States or on the island of Puerto Rico.

“Foreign born” refers to people who say they were born outside the United States or Puerto Rico.

Next: Chapter 1: Using Public Libraries
← Prev Page
You are reading page1Page2Page3Page4Page5Page6
Next Page →