Most American adults read a print book in the past year, even as e-reading continues to grow 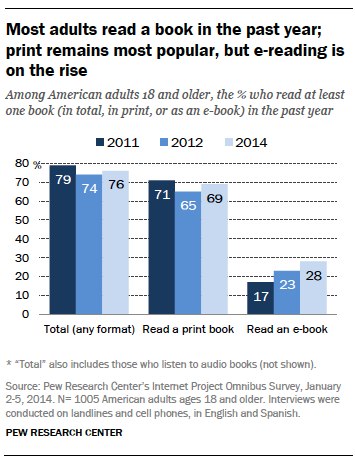 The percentage of adults who read an e-book in the past year has risen to 28%, up from 23% at the end of 2012. At the same time, about seven in ten Americans reported reading a book in print, up four percentage points after a slight dip in 2012, and 14% of adults listened to an audiobook.

Though e-books are rising in popularity, print remains the foundation of Americans’ reading habits. Most people who read e-books also read print books, and just 4% of readers are “e-book only.” Audiobook listeners have the most diverse reading habits overall, while fewer print readers consume books in other formats.

Overall, 76% of adults read a book in some format over the previous 12 months. The typical American adult read or listened to 5 books in the past year, and the average for all adults was 12 books.1 Neither the mean nor median number of books read has changed significantly over the past few years. 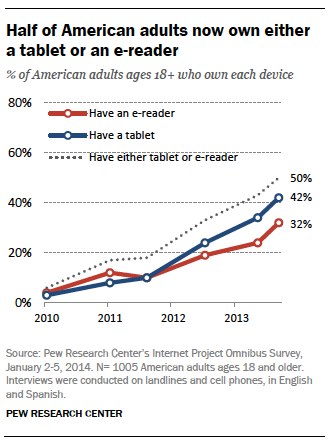 The January 2014 survey, conducted just after the 2013 holiday gift-giving season, produced evidence that e-book reading devices are spreading through the population. Some 42% of adults now own tablet computers, up from 34% in September. And the number of adults who own an e-book reading device like a Kindle or Nook reader jumped from 24% in September to 32% after the holidays.

Overall, 50% of Americans now have a dedicated handheld device–either a tablet computer like an iPad, or an e-reader such as a Kindle or Nook–for reading e-content. That figure has grown from 43% of adults who had either of those devices in September.

In addition, the survey found that 92% of adults have a cell phone (including the 55% of adults who have a smartphone), and 75% have a laptop or desktop computer – figures that have not changed in significantly from our pre-holiday surveys.

People read e-books on other devices, too 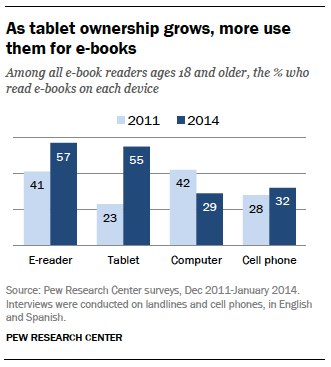 E-book readers who own tablets or e-readers are very likely to read e-books on those devices—but those who own computers or cellphones sometimes turn to those platforms, too. And as tablet and e-reader ownership levels have risen over the past few years, these devices have become more prominent in the e-reading landscape:

These findings come from a survey conducted by Princeton Survey Research Associates International between January 2-5, 2014. The survey was conducted among a nationally representative sample of 1,005 adults ages 18 and older living in the continental United States. Interviews were conducted by landline (500) and cell phone (505, including 268 without a landline phone), and were done in English and Spanish. Statistical results are weighted to correct known demographic discrepancies. The margin of error for the full sample is plus or minus 3.4 percentage points.

Next: Tablet and E-reader Ownership
← Prev Page
You are reading page1Page2Page3Page4
Next Page →