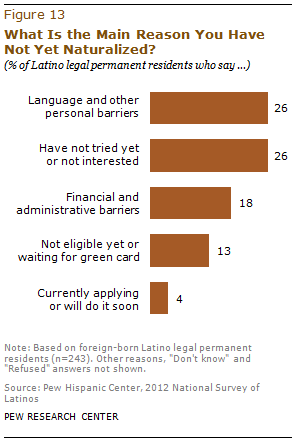 By 2011, a record 5.6 million immigrants from Latin America and the Caribbean had become naturalized, but an even larger number—5.8 million Latin American and Caribbean immigrants—are currently eligible to apply for citizenship but have not done so11. According to the Pew Hispanic survey, about four-in-ten (45%) say the primary reason for not naturalizing is either personal (26%) or administrative barriers (18%).

Among Latino legal permanent residents (LPRs), when asked the main reason that they had not naturalized thus far, 45% identify either personal (26%) or administrative (18%) barriers. Among those citing personal barriers, a large majority (65%) say they need to learn English, and close to a fourth (23%) say they find the citizenship test too difficult. Also, more than nine-in-ten (94%) of those citing administrative barriers say the reason they have not naturalized is the cost of the naturalization application.

Also, some 13% of Latino LPRs interviewed say they are not yet eligible to naturalize. According to U.S. Department of Homeland Security requirements, in order to apply for U.S. citizenship, an LPR needs to spend at least five years holding a resident’s card—or three years for those married to a U.S. citizen—before becoming eligible to apply.

A small share of Latino green card holders (4%) say that they either are currently applying for U.S. citizenship or will so within the next year.13 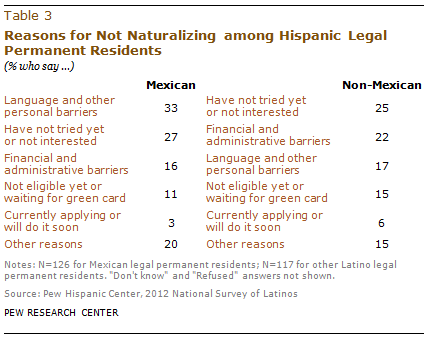 LPRs of Mexican origin and those of non-Mexican origin cite different reasons for not naturalizing. Almost half (48%) of Mexican-born green card holders say the main reason they have not yet naturalized relates to either personal (33%) or administrative (16%) barriers. This compares with about four-in-ten (39%) green card holders who were born in a country other than Mexico who say they have not naturalized due to personal (17%) or administrative (22%) barriers.

By about a two-to-one ratio, Mexican legal permanent residents are more likely than their non-Mexican counterparts to say the main reason they have not become naturalized is language and other personal barriers (33% versus 17%). Mexicans are almost twice as likely as others to say that they either lack English proficiency (21%), find the test too difficult or are afraid of taking it (8%) or have tried to naturalize but did not succeed (4%).

Who Cites Language and Other Personal Barriers?

Latino legal permanent residents with lower levels of educational attainment, income and English proficiency and with fewer years in the U.S. are more likely to cite language and other personal barriers as their main reason for not naturalizing.

Four-in-ten (40%) of those with less than a high school education indicate that language and other personal barriers are the primary reason for not naturalizing, compared with 9% of those with at least a high school diploma. Those who speak English just a little or not all are about three times as likely to respond that language limitations are their primary rationale for not naturalizing (35%), compared with 8% who speak English very well or pretty well.

Who Cites Financial and Administrative Barriers?

Financial and administrative barriers—such as the cost of gaining citizenship or its complexity—are more likely to be an impediment for naturalization for older Latino legal immigrants and those with lower household incomes.

As would be expected, Latino green card holders with household income below $20,000 a year are more likely to identify financial and administrative barriers as the main reason they have not become citizens, compared with those earning $20,000 or more per year—22% versus 13%.

Unmarried Latino legal residents and those without children under 18 living with them are also more likely to identify financial and administrative barriers as the main reason they have not naturalized.

Who Cites “Have Not Tried Yet or Not Interested” for Not Naturalizing?

Latino legal immigrants who have household incomes of $20,000 or higher are also more likely than those with lower incomes to say the reason they have not naturalized is that they lack initiative or interest—31% versus 22%.

Among Latino green card holders, males are 10 percentage points more likely than females to say they have delayed naturalizing mainly because of a lack of interest or initiative—31% versus 21%.

An Awakened Giant: The Hispanic Electorate is Likely to Double by 2030 II. Recent Trends in Naturalization, 2000-2011 III. Who Naturalizes: Reasons for Naturalizing
IV. Reasons for Not Naturalizing
Differences between Mexican and Non-Mexican Legal Permanent ResidentsDifferences among Demographic Groups
References Appendix A: Additional Charts and Tables Appendix B: 2012 National Survey of Latinos Methodology Appendix C: 2012 National Survey of Latinos Topline