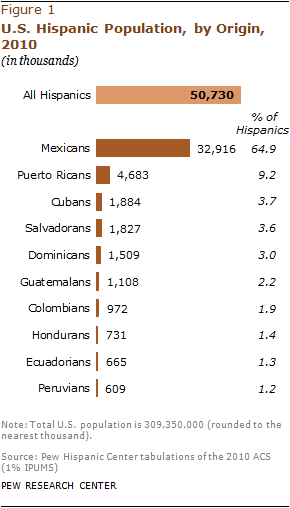 Among the 50.7 million Hispanics in the United States, nearly two-thirds (65%), or 33 million, self-identify as being of Mexican origin, according to tabulations of the 2010 American Community Survey (ACS) by the Pew Hispanic Center, a project of the Pew Research Center. No other Hispanic subgroup rivals the size of the Mexican-origin population. Puerto Ricans, the nation’s second largest Hispanic origin group, make up just 9% of the total Hispanic population in the 50 states and the District of Columbia.1

Hispanic origin groups differ from each other in a number of ways. For instance, U.S. Hispanics of Mexican origin have the lowest median age, at 25 years, while Hispanics of Cuban origin have the highest median age, at 40 years. Colombians are the most likely to have a college degree (32%) while Salvadorans are the least likely (7%). Ecuadorians have the highest annual median household income ($50,000) while Dominicans have the lowest ($34,000). Half of Hondurans do not have health insurance—the highest share among Hispanic origin groups. By contrast, just 15% of Puerto Ricans do not have health insurance. 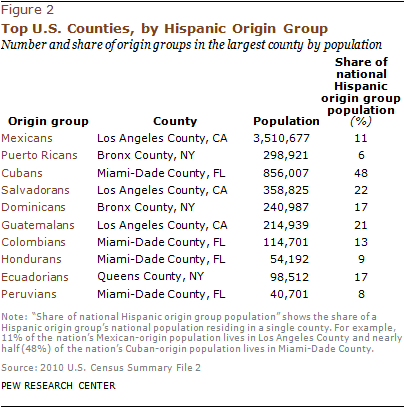 This report also includes an analysis of changes in the characteristics of the 10 largest Hispanic origin groups from 2000 to 2010.

Hispanic origin is based on self-described family ancestry or place of birth in response to a question on the Census Bureau’s American Community Survey. Ancestry is not necessarily the same as the place of birth of the respondent, nor is it indicative of immigrant or citizenship status. For example a U.S. citizen born in Los Angeles of Mexican immigrant parents or grandparents may (or may not) identify his or her Hispanic origin as Mexico. Likewise, some immigrants born in Mexico may identify another country as their origin depending on the place of birth of their ancestors.

This report examines the Hispanic population of the United States by its 10 largest origin groups.

The data for this report are derived from the 2010 American Community Survey (1% IPUMS), which provides detailed geographic, demographic and economic characteristics for each group. The 2000 Census (5% IPUMS) provides data for comparisons in the summary.

Seth Motel is a research assistant at the Pew Hispanic Center. Motel earned his B.A. in political science from Brown University.

Eileen Patten is a research assistant at the Pew Hispanic Center. Patten earned her B.A. in sociology and English from the University of Michigan.

Next: II. Demographics
← Prev Page
You are reading page1Page2Page3Page4Page5Page6Page7Page8
Next Page →