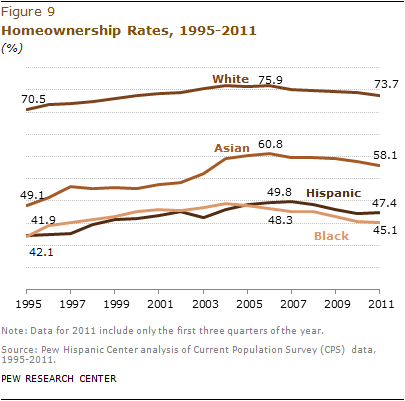 Falling housing prices have affected household wealth among Latinos more than other groups. In 2005, Latinos derived nearly two-thirds of their net worth from home equity. However, because many Latinos live in places where housing prices increased the most prior to the housing crisis—and have fallen the most since—the housing bust had a greater impact on Latino household wealth than any other group (Kochhar, Fry and Taylor, 2011). 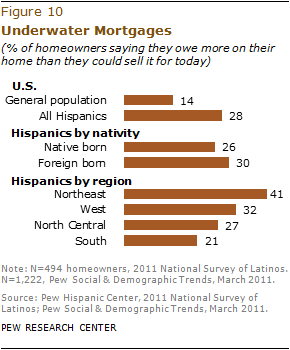 Being underwater varies by region. More than four-in-ten (41%) Latino homeowners in Northeastern states say their mortgage is underwater, a share greater than any other part of the country. By comparison, 32% of Latino homeowners in the West, 27% in the North Central region, and 21% in the South say they owe more on their mortgage than what they could sell their home for.6 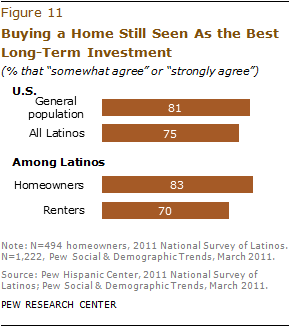 The Investment Value of Homeownership

Despite being hit hard by the housing market downturn, three-in-four (75%) Latinos agree that buying a home is the best long-term investment a person can make in the U.S. This compares with 81% of the general population who say the same (Pew Social & Demographic Trends, 2011).

Latinos have been more affected by the home foreclosure crisis than other groups. According to a recent study by the Center for Responsible Lending (Gruenstein Bocian, Li, Quercia and Reid, 2011), the rate of completed foreclosures on loans originating between 2004 and 2008 was 11.9% for Latinos. That foreclosure rate was more than double the rate for non-Hispanic whites (5.1%) and higher than the rate for blacks (9.8%).