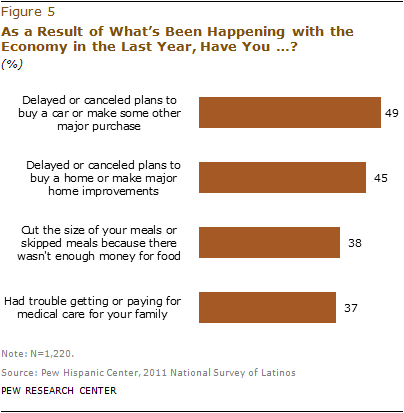 The new Pew Hispanic survey finds that the sour economy has had a significant impact on Hispanics’ spending and economic behaviors. 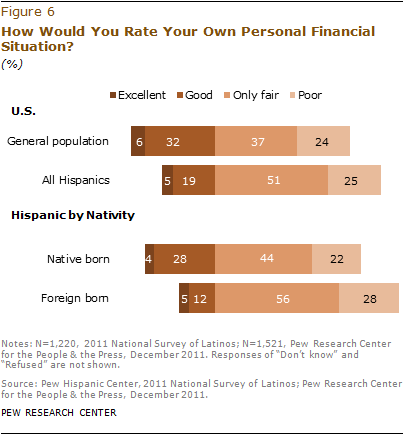 The difficult economy has also affected Latinos’ assessments of their personal finances. According to the new survey, three-in-four (75%) Latinos rate their current financial situation as either “only fair” (51%) or “poor” (25%). By contrast, among U.S. adults, fewer (61%) rate their current financial situation as “only fair” (37%) or “poor” (24%). 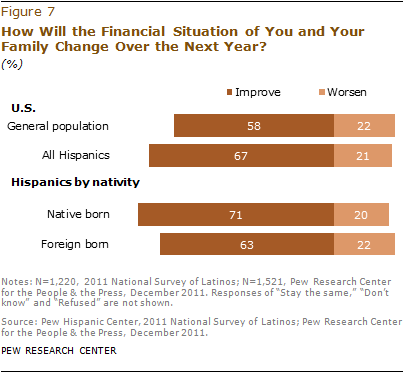 Despite challenging economic conditions and difficult personal finances, Latinos are optimistic about their finances in the coming year—more so than the general public. Two-thirds (67%) of Latinos expect an improvement in their financial situation and that of their family. By contrast, 58% of all adults say they expect to see an improvement. 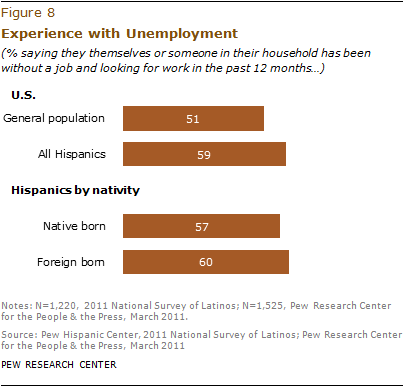 Many Latinos have experienced a spell of unemployment or know someone who has been unemployed. According to the new survey, nearly six-in-ten (59%) Latino adults say this has happened to their household in the past year. Among all U.S. adults, nearly as many said the same in March of 2011—51% (Kohut, Doherty, Dimock and Keeter, 2011).

Overall, native-born Hispanics and foreign-born Hispanics are just as likely to say their households have experienced unemployment in the last year—57% and 60% respectively. However, among the foreign born there are notable differences. Two-thirds (66%) of immigrant Hispanics who are legal residents and two-thirds (66%) of those who do not have U.S. citizenship and are not a legal resident say someone in their household was without a job or looking for work in the last year. By contrast, 54% of naturalized U.S. citizens say the same.

Experience with unemployment varies across other Latino demographic groups as well. Seven-in-ten (70%) of those ages 18 to 29 have experienced unemployment in their households in the last year—more than any other age group—while 57% of Latinos ages 30 to 49, 57% of those ages 50 to 64, and half (51%) of those ages 65 and older say the same.

Finally, household experience with unemployment is higher among Hispanics who are not registered to vote than it is among those who are registered—64% of the former say this compared with 53% of Hispanic registered voters.

Next: III. Latinos and Homeownership
← Prev Page
Page1You are reading page2Page3Page4Page5Page6Page7
Next Page →