Driven by a single-year surge of 24% in Hispanic enrollment, the number of 18- to 24-year-olds attending college in the United States hit an all-time high of 12.2 million in October 2010, according to a Pew Hispanic Center analysis of recently released data from the U.S. Census Bureau.1

College-age Hispanics accounted for 1.8 million, or 15%, of the overall enrollment of 12.2 million young adults in two- or four-year colleges in 2010—setting records both for their number and share of young college students.2 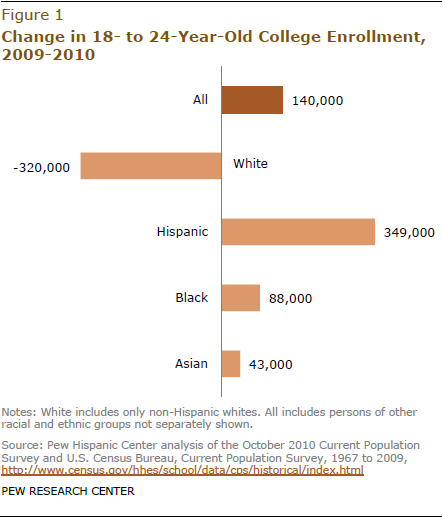 As a result of these shifts, young Hispanics for the first time outnumbered young blacks on campus, even though black college enrollment has also grown steadily for decades and it, too, has surged in recent years. In 2010, 38% of all 18- to 24-year-old blacks were enrolled in college, up from 13% in 1967 and 32% in 2008.

The Hispanic enrollment increase has been even more dramatic than the black enrollment increase because it has been spurred by a mixture of population growth and educational strides. High levels of immigration and high birth rates have made Hispanics the nation’s biggest minority group, comprising 16% of the U.S. population as of 2010. In 1972, just 5% of the nation’s 18- to 24-year-olds were Hispanic. By 2010, that share rose to 19%.

However, population growth accounts for only a small share of the 24% Hispanic college enrollment spike from 2009 to 2010. During that same period, the total population of 18- to 24-year-old Hispanics grew by 7%.

The 320,000 student decline in young white enrollment since 2009 is a 4% decline and the largest decline in percentage terms since at least 1993 (when this historical series begins). The decline partly reflects that the size of the white 18- to 24-year-old population peaked in 2008.

The Impact of a Sluggish Economy

College enrollments have been rising steadily for decades, but the pace of growth accelerated when the Great Recession began in 2007. Historically high levels of unemployment, especially for young adults, appear to have served as a stimulant to college enrollment (Fry, 2009).

The recession was officially over by mid-2009, but the economy has continued to struggle to generate new jobs and college enrollments have continued to set records. However, these macroeconomic conditions cannot fully explain why Hispanic enrollments grew so much more from 2009 to 2010 than did the enrollments of other racial and economic groups. For that, the demographic and educational attainment trends cited above would seem to be more determinative.

In analyzing trends in college enrollments by race and ethnicity, this report focuses on the enrollments of 18- to 24-year-olds, the traditional age of college students. 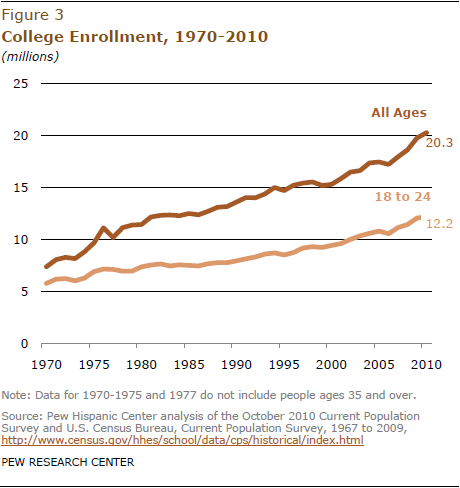