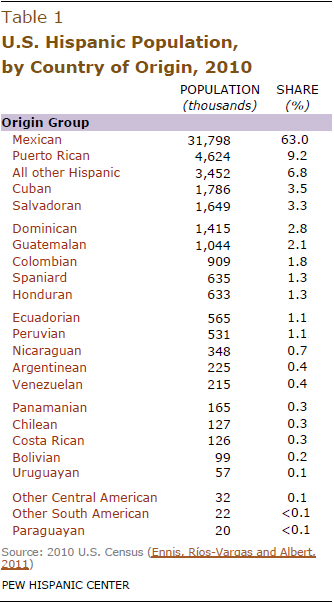 Hispanics of Mexican, Puerto Rican, and Cuban origin or descent remain the nation’s three largest Hispanic country-of-origin groups, according to the 2010 U.S. Census. However, while the relative position of these three groups has remained unchanged since 2000, the next four Hispanic sub-groups grew faster during the decade.

Hispanics of Salvadoran origin, the fourth largest Hispanic country-of-origin group grew by 152% since 2000. The Dominican population grew by 85%, the Guatemalan population by 180% and the Colombian population by 93%. Meanwhile, the Cuban and Puerto Rican populations grow more slowly—44% and 36% respectively (Ennis, Ríos-Vargas and Albert, 2011).1 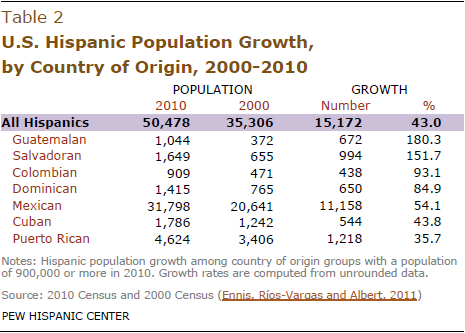 Country of origin is based on self-described family ancestry or place of birth in response to questions in the Census Bureau’s American Community Survey and on the 2010 Census form. It is not necessarily the same as place of birth, nor is it indicative of immigrant or citizenship status. For example, a U.S. citizen born in Los Angeles of Mexican immigrant parents or grandparents may (or may not) identify his or her country of origin as Mexico. Likewise, some immigrants born in Mexico may identify another country as their origin depending on the place of birth of their ancestors.

Next: II. Metropolitan Area Diversity
← Prev Page
You are reading page1Page2Page3
Next Page →