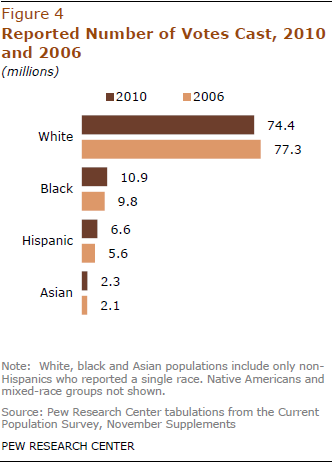 The electorate in last year’s midterm election was the most racially and ethnically diverse midterm electorate ever. Of the nation’s 96 million voters3 in 2010, non-whites made up a record 22.5%, up from 19.6% of all voters in 2006. This matches a pattern of growing diversity observed in presidential election years (Lopez and Taylor, 2009)

This growth in diversity among the nation’s midterm electorate reflects population growth and increased participation among minority groups, but also reflects a decline in participation among whites. There were some 2.9 million fewer white voters in 2010 than in 2006. In contrast, there were 1.1 million more black voters in 2010 than in 2006, along with one million more Latino voters and 200,000 more Asian voters. 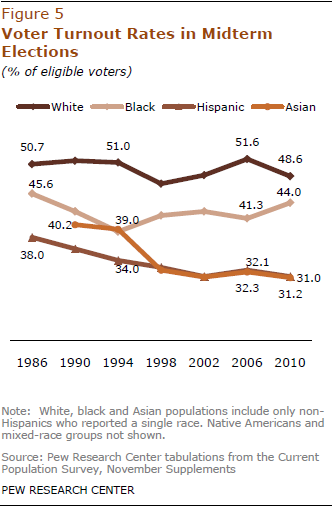 When it comes to participation rates, a greater share of whites participated in the 2010 election than any other group, despite a decline in the number of white voters. Nearly half (48.6%) of all white eligible voters say they cast a vote in last year’s election, while 44% of blacks, 31.2% of Hispanics and 31% of Asians voted. 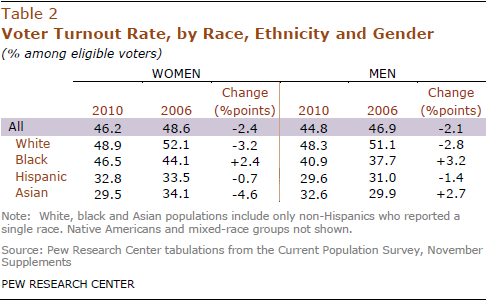 According to Pew Hispanic Center tabulations, one-in-four (24.9%) voters in 2010 took advantage of these opportunities, up from one-in-five (18.5%) who did so in 2006. Among all major racial and ethnic voter groups, early voting rates were up. 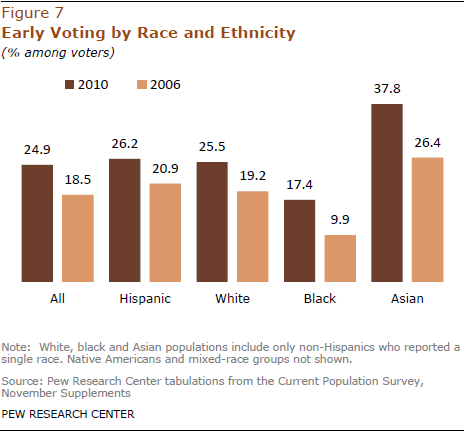 When examined by race and ethnicity, for all major groups, the number one reason given for not voting was “too busy, conflicting work or school schedule.” This was highest among Asian registered voters who did not vote—some 37.4% cited this reason.

One other reason offered was “forgot to vote.” Overall, 7.5% of all registered voters who did not vote cited this as the reason they did not vote. But among Latinos, nearly twice as many cited this reason—13.3%—making this the third most common answer given among them. 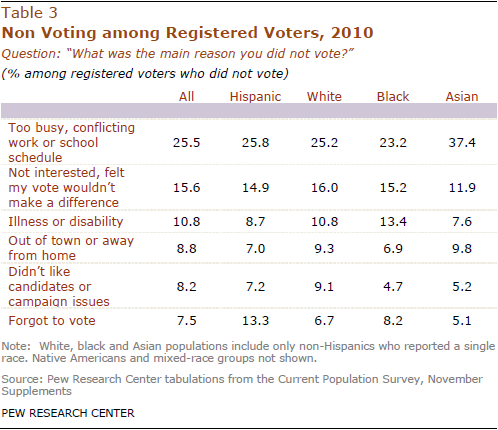 Next: Appendix
← Prev Page
Page1You are reading page2Page3
Next Page →