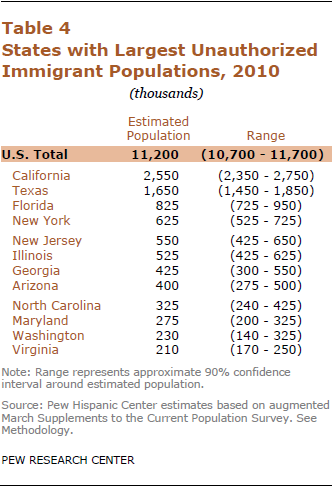 The four individual states where the number of unauthorized immigrants declined from March 2007 to March 2010 were New York, Florida, Virginia and Colorado. Additionally, the combined unauthorized immigrant population in Arizona, Nevada and Utah also decreased during that period, although the change was not statistically significant for any of those states individually.

In the Mountain West, the combined unauthorized immigrant population of Arizona, Nevada and Utah declined to an estimated 700,000 from an estimated 850,000 in 2007. 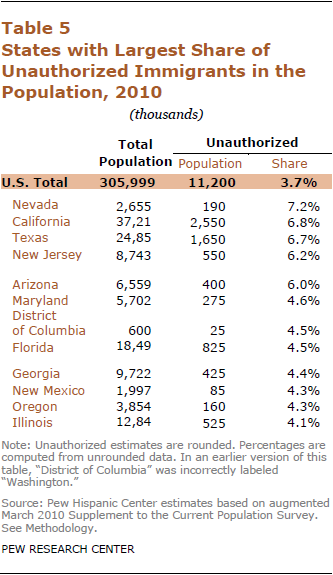 California has by far the largest unauthorized-immigrant population (2.55 million). It also is among the states where unauthorized immigrants constitute the largest shares of the overall populations. In addition to California (6.8%), other top states are Nevada (7.2%) and Texas (6.7%).

Among the five states with the largest unauthorized populations, Mexicans constitute less than half the stock in three of them—New York, New Jersey and Florida.

Because of small sample size in many states and potentially large sampling variability, some state estimates presented here are based on multiyear averages. For the 34 states with fewer than 50 cases of unauthorized immigrant households in the 2010 sample survey, the estimates for that year are an average of 2009 and 2010. These states are Alabama, Alaska, Arkansas, Delaware, Hawaii, Idaho, Indiana, Iowa, Kansas, Kentucky, Louisiana, Maine, Massachusetts, Michigan, Minnesota, Mississippi, Missouri, Montana, Nebraska, New Hampshire, New Mexico, North Dakota, Ohio, Oklahoma, Pennsylvania, Rhode Island, South Carolina, South Dakota, Tennessee, Utah, Vermont, West Virginia, Wisconsin and Wyoming. Estimates for other states and for the District of Columbia are based solely on 2010 data.

All 2007 state estimates were derived by calculating the average share of the national unauthorized immigrant population for 2006-2008 that was held by each state, then applying that share to the 2007 national total.