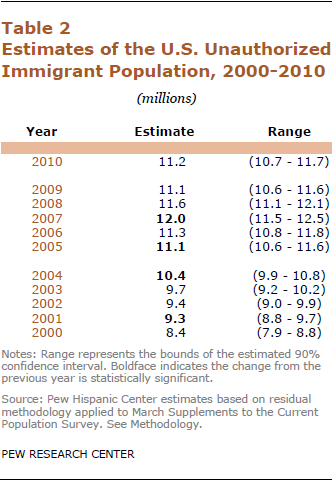 The shrinkage of the unauthorized immigrant population from its 2007 peak apparently has halted, at least temporarily. According to Pew Hispanic Center estimates, there were 11.2 million unauthorized immigrants living in the United States in March 2010, statistically unchanged from the March 2009 estimate of 11.1 million.

The Pew Hispanic Center’s March 2009 estimate had represented the first reversal in the size of the unauthorized-immigrant population in two decades. There were 3.5 million unauthorized immigrants living in the United States in 1990, a number that grew to 8.4 million in 2000. The population leveled off for two years and grew steadily from 2003 to 2007, when it peaked at 12 million. From 2007 to 2009, it shrank by 8%.1

Unauthorized immigrants represented 28% of the nation’s foreign-born population of 40.2 million in March 2010, according to the Pew Hispanic Center estimates. The share is the same as it was in 2009 but a decline from 2007’s 31%.

The other components of the foreign-born population are its 29 million legal immigrants: 14.9 million naturalized citizens, 12.4 million permanent residents and 1.7 million legal temporary migrants. The number of naturalized citizens grew significantly from 13.7 million in 2007; this increase is part of a longer-term trend in which more immigrants are choosing to naturalize. The number of legal permanent residents or legal temporary migrants showed no significant change. 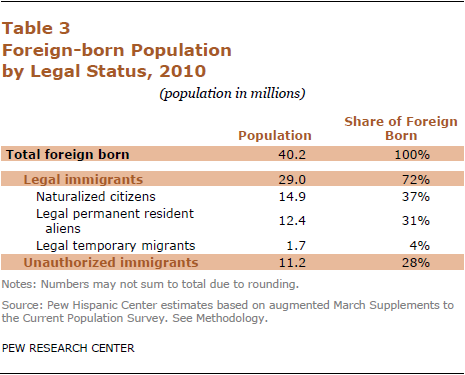 In a report last year, the Pew Hispanic Center concluded that inflows of unauthorized immigrants from Mexico had fallen off sharply, presaging the decline found in the 2010 estimates. According to the center’s estimates, an average of 150,000 unauthorized immigrants from Mexico arrived annually during the period from March 2007 to March 2009, which was 70% below the annual average of 500,000 during the first half of the decade.

In addition to reduced inflows, the other ways in which an unauthorized population could decline are via an increase in the number of migrants voluntarily leaving the country, deportations, deaths or conversion to legal status. As the Pew Hispanic Center has previously reported, although many Mexican migrants voluntarily return home each year, there is no evidence that this number has grown in recent years.

Removals (deportations) have more than doubled over the past decade, reaching almost 400,000 in fiscal 2009. Mexicans have constituted the majority of deportations for at least the past decade. In 2009, more than 70% of deportees were Mexican, according to the Department of Homeland Security.

Because this population is relatively young, mortality is not likely to be an important factor. As for conversion to legal status, that is more difficult now than in the 1990s or earlier; the number of all status adjustments in the last three years is unchanged from average levels for 2001-2006, according to figures from the Department of Homeland Security’s Yearbook of Immigration Statistics. 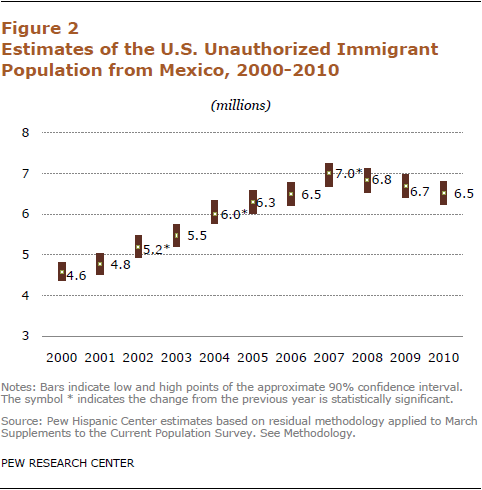 Next: III. Births and Children
← Prev Page
Page1You are reading page2Page3Page4Page5Page6Page7Page8
Next Page →