The weekly earnings of workers during the recession and the initial stage of the recovery were generally stagnant.19 However, foreign-born workers experienced a sharp decline in earnings during the recovery even as they managed to boost their employment. Hispanics also did not fare well—their earnings fell for two years in a row—and, among Hispanics, immigrants sustained the biggest cut in wages. 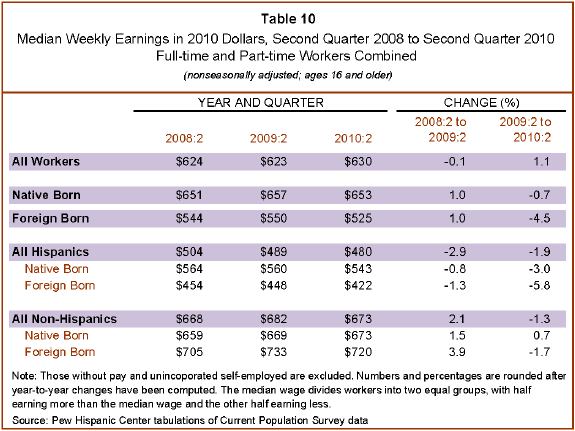 In the midst of overall wage stagnation, the earnings of foreign-born workers fell sharply during the recovery. Wages for immigrants did not change much in the recession, moving from $544 in 2008 to $550 in 2009. However, in the recovery from 2009 to 2010, median earnings of foreign-born workers dropped to $525, a loss of 4.5%. The earnings of native-born workers have remained flat during the recession and recovery, starting at $651 in the second quarter of 2008 and ending at $653 in the second quarter of 2010.

The downward momentum in earnings for Latinos was led by immigrants. For immigrant Latinos, median weekly earnings dropped from $454 in 2008 to $448 in 2009, and then to $422 in 2010. Over the two-year period, the earnings of immigrant Latinos decreased by 7.0%.

Next: Appendix A: Revisions of the Current Population Survey
← Prev Page
Page1Page2Page3You are reading page4Page5Page6
Next Page →

After the Great Recession: Foreign Born Gain Jobs; Native Born Lose Jobs II. Employment and Unemployment in the Recession and Recovery III. The Working-Age Population and the Labor Force: Are Immigrants Returning?
IV. Earnings of Native-born and Foreign-born Workers
Appendix A: Revisions of the Current Population Survey Appendix B: Data Tables