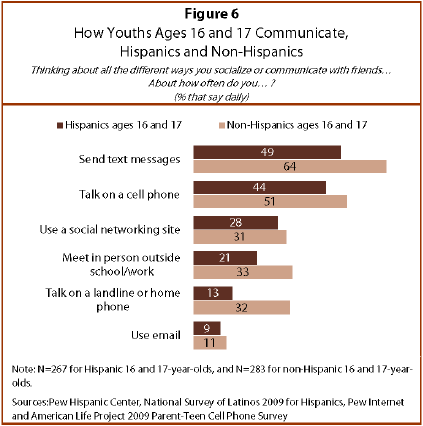 Young Latinos are less inclined than their non-Latino counterparts to use mobile technologies to communicate with friends. Among Latinos ages 16 and 17, 49% say they text daily and 44% say they talk on a cell phone daily to communicate with their friends. Texting is even more prevalent among the non-Hispanic youth population ages 16 and 17. Almost two-thirds (64%) report texting daily to friends, and some 51% of non-Hispanic youths talk on a cell phone daily to socialize with their friends (Lenhart, Ling, Campbell and Purcell, 2010).2

Use of internet technologies, including social networking sites and email, do not differ markedly between Hispanic teens ages 16 and 17 and teens of the same age in the non-Hispanic population. Some 28% of Hispanics report that they use social networking sites such as Facebook or MySpace daily to communicate with their friends, compared with 31% of the non-Hispanic population of the same age. Email use is similarly low for both groups—9% of Latino teens ages 16 and 17 use email daily to communicate with their friends, as do 11% of comparable non-Hispanic youths.

Notable differences are apparent when looking at the use of more traditional methods of socializing with friends. While just 21% of Latinos ages 16 and 17 report that they spend time in person with their friends outside of school or work daily, for the non-Hispanic youth population ages 16 and 17 this share reaches 33%. And while only 13% of Latinos ages 16 and 17 use a landline or home phone daily to maintain contact with friends, almost one-third (32%) of non-Hispanic youths of the same age say they do so.

Next: Appendix A: 2009 National Survey of Latinos, Survey Methodology and Topline
← Prev Page
Page1Page2You are reading page3Page4
Next Page →

More than half of smartphone users get news alerts, but few get them often

How having smartphones (or not) shapes the way teens communicate

For teens, phone calls are reserved for closer relationships

Behind Facebook’s WhatsApp purchase: A global appetite for texting