The National Center for Education Statistics regularly publishes status high school completion rates (National Center for Education Statistics, 2009a). Researchers interested in gauging the performance of high schools in graduating students on time with regular high school diplomas have noted some of the deficiencies of the NCES status completion rates and have utilized alternative methodologies and data sets to estimate the rate of on-time high school graduation (Heckman and LaFontaine, 2007).

The 2008 American Community Survey does not yield graduation rates, and inferences regarding the performance of American public schools may not be warranted. Household surveys such as the American Community Survey are more indicative of final educational attainment and better gauge the success of the entire educational system, including the “second chance” adult education system and correctional facilities as well as public schools.

Using the 2008 American Community Survey, we can quantify the importance of these two features for the measurement of high school completion and high school graduation.

The top panel of Table B1 reports the educational attainment of 20- to 29-year-olds for the total population (including both the institutionalized and those in the armed forces). About 5% of native-born Hispanic, black and white young adults have a GED as their highest educational attainment, but it varies by gender. Confirming Heckman and LaFontaine (2007), black males are the most likely to end their education with a GED. 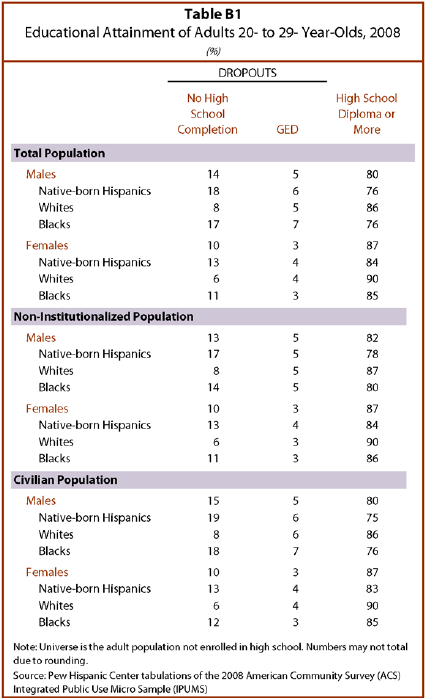 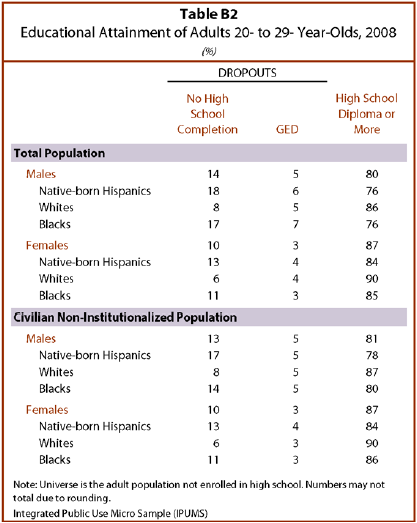 The analysis uses the University of Minnesota Population Center’s Integrated Public Use Micro Sample of the 2008 American Community Survey (ACS). Documentation is available at http://usa.ipums.org/usa/doc.shtml. The year 2008 is the latest one available. The ACS is a 1% sample of the resident population and is designed to collect long-form Decennial Census data on an annual basis. The 2008 ACS data collection is the first year in which the questionnaire disaggregated the responses on the highest level of schooling question to distinguish completing high school by receipt of a high school diploma separately from obtaining a high school equivalent (e.g., GED).

In part because of its large sample size, the ACS has become a primary source of data on the educational attainment of the U.S. population. For example, the U.S. Census Bureau now publishes state-level educational attainment data from the ACS in its P20 reports (Crissey, 2009). The National Center for Education Statistics now publishes detailed status high school dropout rates using the ACS (National Center for Education Statistics, 2009b).

The Census Bureau has conducted evaluations of the quality of the educational attainment data collected in the ACS and compared it to the March Current Population Survey (the long-standing source of data on educational attainment). It finds that the ACS data are generally consistent with the CPS; however, the CPS reveals a higher fraction of the population completing high school and a smaller fraction reporting “12th grade, no diploma” (Scanniello, 2007). The differences between the two surveys in the level of high school attainment may reflect the differences in the mode of collecting the data. The ACS is primarily a mail-back survey; the CPS is collected by a telephone interviewer. In the latter case, respondents do not have a list of the educational attainment categories in front of them and hence may be less likely to report a detailed category such as “12th grade, no diploma.”

The sample analyzed herein consists of adults ages 20 and older. Following National Center for Education Statistics’ practice in tabulating high school completion rates, adults enrolled in school and who had not completed high school were excluded from the analysis. Among the foreign born in the sample, in a small number of cases (0.3%) the number of years since migration exceeds the immigrant’s age. These respondents with anomalous data were excluded from the sample. The sample analyzed had 2,220,070 adults: 301,507 respondents who were either not U.S. citizens at birth or were born in Puerto Rico and 1,918,563 native-born respondents. The sample included 236,749 Hispanic adults.