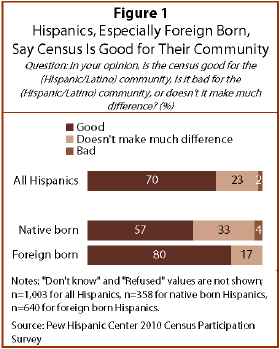 Foreign-born Hispanics are more positive and knowledgeable about the 2010 U.S. Census than are native-born Hispanics, according to a nationwide survey of 1,003 Latino adults conducted March 16-25, 2010, by the Pew Hispanic Center, a project of the Pew Research Center.

Overall, seven-in-ten (70%) Hispanics say the census is good for the Hispanic community. However, foreign-born Hispanics are more likely than native-born Hispanics to feel this way—80% versus 57%.

Foreign-born Hispanics are also more likely than native-born Hispanics to correctly say the census cannot be used to determine whether or not someone is in the country legally—69% versus 57%. And they are more inclined than the native born to trust the Census Bureau to keep their personal information confidential. Eight-in-ten of both groups know that the bureau is required to do so; however, among those who know this, just 66% of the native born say they believe the bureau will abide by this requirement, compared with 80% of the foreign born.

Hispanics are the nation’s largest minority ethnic group. They numbered 46.9 million, or 15.4% of the total U.S. population, in 2008, up from 35.3 million in the 2000 Census. Among all Hispanics living in this country, 62% are native born and 38% are foreign born. Among Hispanic adults, however, just 47% are native born while 53% are foreign born.

Just as the foreign born are more positive and knowledgeable about the census than the native born, so, too, are Spanish-speaking and bilingual Hispanics more positive and knowledgeable than English-speaking Hispanics.1 Nearly eight-in-ten (79%) Spanish-dominant Hispanics and 69% of bilingual Hispanics say the census is good for the Hispanic community. In contrast, 53% of English-dominant Hispanics hold the same view.

Census participation rates among Hispanics have traditionally been lower than those of other groups. In the 2000 Census, the mail return rate among Hispanic households was 69%, while for non-Hispanic households it was 79%. As part of its effort to increase participation rates among groups that have historically had low levels of census participation, the Census Bureau has spent about 20% of its total advertisement budget this year on paid ads aimed at the Hispanic community, mainly Spanish speakers. 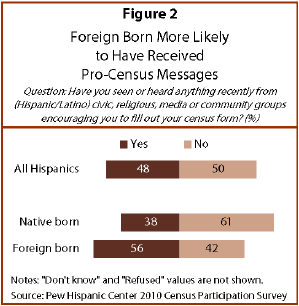 According to the Pew Hispanic survey, nearly half (48%) of all Latinos say they have seen or heard something recently from an organization encouraging them to fill out their census form. But here again, there is a significant difference between the foreign born and the native born in the share who report having seen or heard such messages—56% versus 38%.

The outreach efforts appear to have improved attitudes toward the census among Hispanics. Among those who say they have recently seen messages encouraging participation, views of the census are more positive; knowledge of the census and its uses is greater; and a higher share say they definitely plan to send in their census forms.

The timing of the Pew Hispanic survey coincided with the arrival of 2010 Census forms in the mailboxes of most U.S. households beginning March 15, with reminder postcards arriving March 22-24. The forms ask for basic information about everyone living in the household as of April 1, 2010 Census Day.

The nationwide Pew Hispanic survey was conducted on landline and cellular telephones among Hispanics ages 18 and older. It has a margin of sampling error of plus or minus 4.5 percentage points for the full sample and higher for subgroups. (For more on the methodology, see Appendix A.)

Some of the other key findings of the survey include:

This report is based on a nationally representative survey of 1,003 Hispanics ages 18 and older. Interviews were conducted from March 16 through March 25, 2010. The margin of error for the full sample is plus or minus 4.5 percentage points at the 95% confidence level. For a full description of the survey methodology, see Appendix A.

Next: II. The 2010 Census and the Hispanic Community
← Prev Page
You are reading page1Page2Page3Page4Page5Page6
Next Page →

Latinos and the 2010 Census: The Foreign Born Are More Positive
I. OverviewAbout this ReportA Note on Terminology
II. The 2010 Census and the Hispanic Community III. Knowledge and Trust IV. Participation in the Census V. Media and Group Outreach Messages Appendix A: Survey Methodology