In a deteriorating economy, many Latinos have been adjusting their economic behaviors, including sending smaller remittances, curtailing spending plans and participating in informal loan agreements with family and friends. 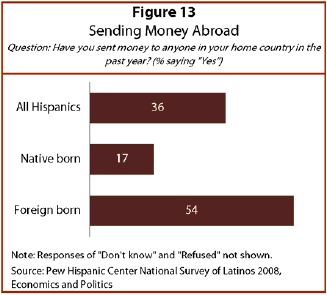 More than one-third (36%) of Latino adults say they have sent money to someone in their home country in the past year. as have more than half (54%) of the foreign born. The share of Latinos who say they sent remittances abroad is unchanged compared to 2006, based on results from the Pew Hispanic Center 2006 National Survey of Latinos. In 2006, 35% of Latinos, and 51% of foreign-born Latinos, said they had sent remittances in the prior year. 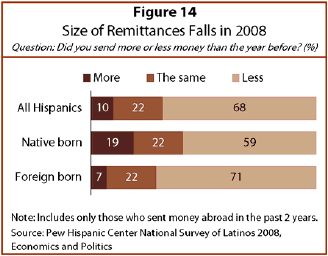 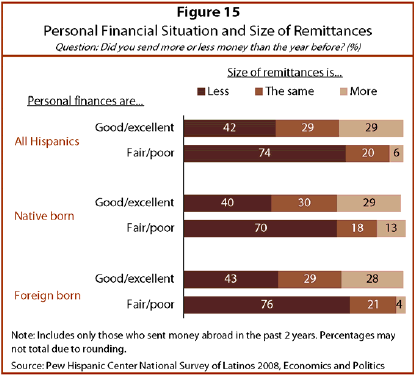 Among those who sent less money abroad, 73% cite financial circumstances as the reason for sending less in the past year than in the previous year. Among foreign-born Latinos who sent fewer remittances, 83% cite financial circumstances. Specific reasons mentioned by foreign-born Hispanics include less work or less income (43%), the economic situation (22%), having less money available (15%) and the rising cost of living (10%).

Trends in Remittances to Mexico, El Salvador, Guatemala and Honduras

Remittance flows are composed of funds transferred by individuals residing outside a country to individuals in that country. For Mexico and countries in Central America, these funds originate primarily in the U.S., the destination for the vast majority of migrants from those countries.

According to central bank reports, remittances to Mexico and Central America increased rapidly from 2000 to 2006. However, growth has tapered off for most countries in the past two years.

Mexico, the largest recipient of remittances in Latin America and the Caribbean, received nearly $24 billion in 2006, up from less than $7 billion in 2000. Growth came to a halt in 2007, when Mexico received virtually the same volume of transfers as in 2006. Current trends suggest that remittance receipts in Mexico in 2008 may struggle to match the level of receipts from 2006 and 2007. 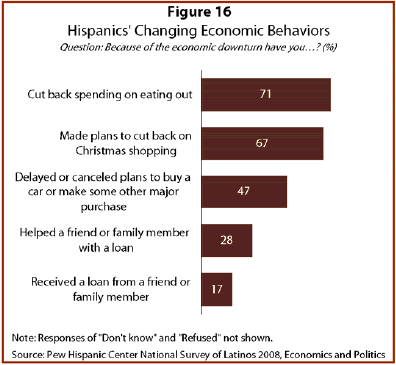 A much larger share of Latinos report making adjustments in their day-to-day spending. Seven-in-ten Latinos (71%) report that they cut back spending on eating out as a result of the economic downturn. This is most prevalent among Latinos under age 55—75% of this group report cutting back, compared with 56% of people 55 or older. Latinos with children are also more likely to report this cost-cutting measure, compared with Latinos without young children—77% versus 65%.

The Pew Hispanic Center survey also explored how the economic downturn may have affected the prevalence of informal loans among Latinos. Informal loans are often an important alternative source of funds when individuals are unable to obtain loans through traditional credit markets.

More than one-quarter of Latinos (28%) report that as a result of the economic downturn, they helped a family member or friend with a loan. One-third of employed Latinos (33%), Latinos with annual incomes over $30,000 (34%) and Latinos with at least a high school diploma (32%) report providing loan help to a family member or friend in the past year. One-third of Latinos ages 18-29 also report helping out friends or family; this share is significantly higher than the proportion of people ages 55 or older who provided assistance (23%).