The sample frame was stratified via a disproportionate stratified design. All telephone exchanges in the contiguous 48 states were divided into groups, or strata, based on their concentration of Latino households. The sample was also run against InfoUSA and other listed databases, and then scrubbed against known Latino surnames. Any “hits” were subdivided into a “surname” stratum, with all other sample being put into other “RDD” strata. Overall, then the study employed five strata: 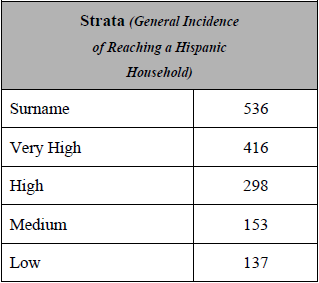 Next: Appendix B: Trends in Remittances to Mexico, El Salvador, Guatemala and Honduras
← Prev Page
Page1Page2Page3Page4Page5Page6Page7Page8You are reading page9Page10
Next Page →