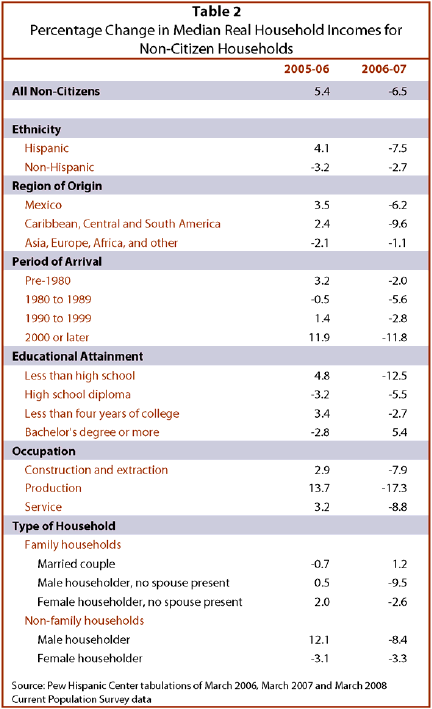 Therefore, the Pew Hispanic Center developed its own estimates of changes in the income of non-citizen households by principal characteristics using the same source data as the Census Bureau—the Current Population Survey. The Center’s estimates of changes in household income may differ from those reported by the Census Bureau because of differences in the sample of households and slight differences in methodology.11

The time an immigrant has spent in the U.S. was also a factor in income declines. The incomes of the most recent immigrants (those who entered in 2000 or later) dropped by 11.8%, far in excess of the losses incurred by non-citizens who have been in the U.S. longer.

Reflecting this pattern of income losses for the least educated, non-citizens employed in production (-17.3%) and construction occupations (-7.9%) were among those whose incomes fell the most. Incomes of households led by non-citizens working in service occupations dropped 8.8%. Those three occupations employed nearly half (48.7%) of non-citizen household heads in 2008.

Households led by non-citizen males, either unmarried or with no spouse present, were at a clear disadvantage. Those households experienced the largest losses in incomes—9.5% for family households and 8.4% for non-family households headed by males.12 In contrast, the incomes of married couple households increased 1.2% from 2006 to 2007.

In sum, household incomes have fallen most for non-citizens who are Hispanic; from Mexico, other Latin American countries and the Caribbean; recently arrived; males, either unmarried or with no spouse present; lacking a high school education; and employed in construction, production or service occupations. Those characteristics of non-citizen households experiencing declines in income that are higher than average are also associated with likely undocumented status for the head of household.

Next: Appendix A: Data Tables
← Prev Page
Page1Page2You are reading page3Page4
Next Page →