Updated June 4, 2008 to include results from the Puerto Rico primary

Updated March 7, 2008 to include results from Texas and other recent primaries

Hispanics voted for Sen. Hillary Clinton over Sen. Barack Obama by a margin of nearly two-to-one in the race for the 2008 Democratic presidential nomination, according to an analysis by the Pew Hispanic Center of exit polls taken throughout the primary season. The Center’s analysis also finds a sharp increase in Latino electoral participation in 2008, with their share of the Democratic primary vote rising in 16 of the 19 states for which exit polling makes it possible to compare 2008 and 2004 turnout shares. 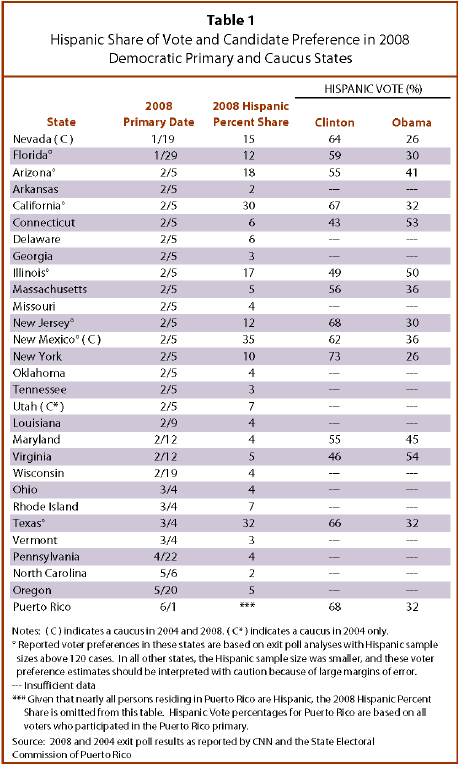 This report examines the turnout, demographic characteristics, opinions and voting patterns of the Latino electorate in Democratic primaries and caucuses held in 2008.1 Where possible, it draws comparisons and contrasts among Latino, black and white voting patterns. It also compares Latino turnout in 2008 with turnout in 2004. The report is based on an analysis of Super Tuesday exit polling data about Latinos that the Pew Hispanic Center received on a contractual basis from Edison Media Research and Mitofsky International, the firm that conducts exit poll surveys for the National Election Pool, a national consortium of media organizations. It also utilizes tabulations from exit polls made publicly available by CNN for a number of states whose primaries were not on Super Tuesday.

Key findings in this report:

The exit poll data used in this report come from the Edison Media Research and Mitofsky International National Election Pool Entrance and Exit Poll Surveys of voters in states that have held primaries and caucuses this year. Data for the analysis of voters in the 16 Democratic primaries held on Super Tuesday, Feb. 5, 2008, were provided to the Pew Hispanic Center on a contractual basis by Edison Media Research and Mitofsky International. These 16 exit polls were aggregated and weighted into a single dataset for Hispanic, white non-Hispanic and black non-Hispanic voters. The sample size for the aggregated Hispanic voter dataset was 1,809 survey respondents. The sample size for the white non-Hispanic voter dataset was 11,558. And the size for the black non-Hispanic voter dataset was 3,120. The 16 states included in this aggregated analysis are Alabama, Arizona, Arkansas, California, Connecticut, Delaware, Georgia, Illinois, Massachusetts, Missouri, New Jersey, New Mexico, New York, Oklahoma, Tennessee and Utah. All other analysis from entrance and exit polls conducted by Edison/Mitofsky in non-Super Tuesday states, including Texas, comes from tabulations made publicly available by CNN. Results from Puerto Rico are based on complete vote tallies published by the Puerto Rico State Electoral Commission.

The terms “Latino” and “Hispanic” are used interchangeably in this report. References to “whites” and “blacks” are to the non-Hispanic components of those populations.

Next: II. The Hispanic Share of the Democratic Primary Electorate
← Prev Page
You are reading page1Page2Page3Page4
Next Page →