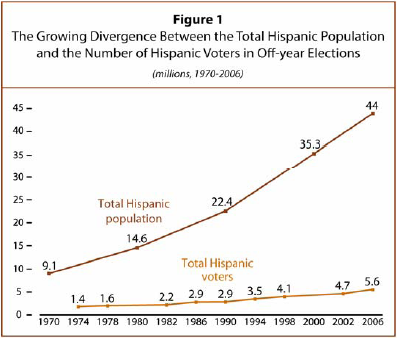 As a result, while Latinos represented nearly half the total population growth in the U.S. between 2002 and 2006, the Latino share among all new eligible voters was just 20%. By comparison, whites accounted for 24% of the population growth and 47% of all eligible new voters.

About 5.6 million Hispanics voted in the 2006 mid-term election, which historically draws far fewer voters than the quadrennial race for president. Latinos accounted for 5.8% of all votes cast, up from 5.3% in 2002. That increase was largely a function of demographic growth.

Latinos historically lag behind whites and blacks in registration (percent among all eligible voters) and voting (percent of registered voters who actually cast ballots). In 2006, the pro-immigration rallies held in many cities raised expectations that political participation among Latinos would also increase.

Census data shows a marginal increase in registration and participation rates among Latinos between 2002 and 2006. Whites, however, also experienced a slight gain, so Latinos did not close the considerable gap. About 54% of Latino eligible voters registered in 2006, up from 53% in 2002. About 60% of these registered voters said they actually voted in 2006, up from 58% in 2002.

The shares of blacks who registered and voted declined from 2002 to 2006. Registration rates decreased by two percentage points, to 61%, and voting by one percentage point, to 67%.

The combination of demographic factors and participation rates meant that 13% of the total Latino population voted in 2006, compared with 39% of all whites and 27% of all blacks. Among all Hispanics and whites, the 2006 turnout represented a slight increase over 2002 (1 and 2 percentage points, respectively) while it remained unchanged for blacks.

This fact sheet is based on data from a supplement of the Current Population Survey (CPS) that is conducted by the U.S. Census Bureau every November of an election year. The survey asks whether individuals were registered to vote and whether they actually voted but does not probe for party or candidate preferences.

The vote totals in this fact sheet are based on a supplement of the Current Population Survey that is conducted by the U.S. Census Bureau every November in an election year. The supplement, which includes voter registration and voting information, is an authoritative source of information on voter turnout (see Appendix).

The CPS count is based on self-reports by respondents. In mid-term elections, there is a difference between the CPS count and other published ballot counts. For example, the November 2006 CPS indicates that 96.1 million persons reported voting in the 2006 national election. Rhodes Cook, another authority on the count, reports the total as 83.8 million. That report is based on the “highest race” ballot tally for each state, or the ballot count from the highest office contested in the election.

The discrepancy between the Rhodes estimate and the CPS is 12.4 million votes, or about 15%. It reflects a combination of an understatement in the ballot count and an overestimate in the CPS (U.S. Census Bureau, 2002).

The Hispanic population grew by 5.7 million between November 2002 and November 2006, the time period that frames the two elections. Hispanics accounted for nearly half of the total population growth. 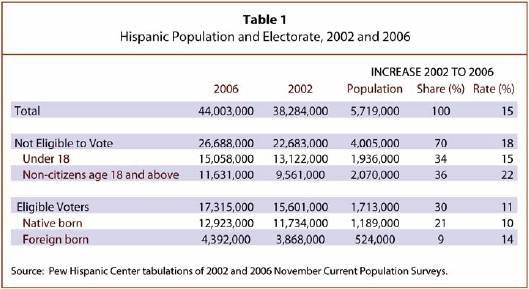 Going to the Polls 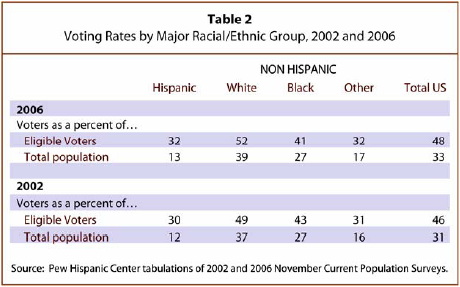 The Latino electorate was a much smaller share of the Latino population than it was among whites and blacks. In November 2006, 39% of Hispanics were eligible to vote compared to 76% of whites and 65% of blacks (Table 3).

About 54% of Hispanics who were eligible to vote registered in November 2006. Among whites and blacks, the figure was 71% and 61%, respectively. (Table 4). Registration rates increased slightly among Hispanics and whites between the two elections but decreased among blacks. 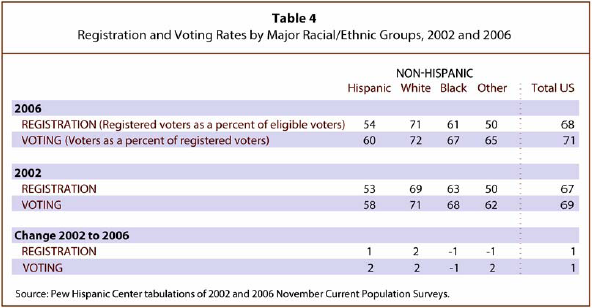 Foreign-born Hispanics who were registered to vote in 2006 were more likely to report voting than their native-born counterparts (67% vs. 58%).

Characteristics of the Hispanic Population and Electorate

74% of Latinos who were eligible to vote were born in the U.S.

In November 2006, about four-in-ten Hispanics were eligible to vote. These eligible voters were distinct in many ways when compared with the entire Hispanic adult population (Table 5). 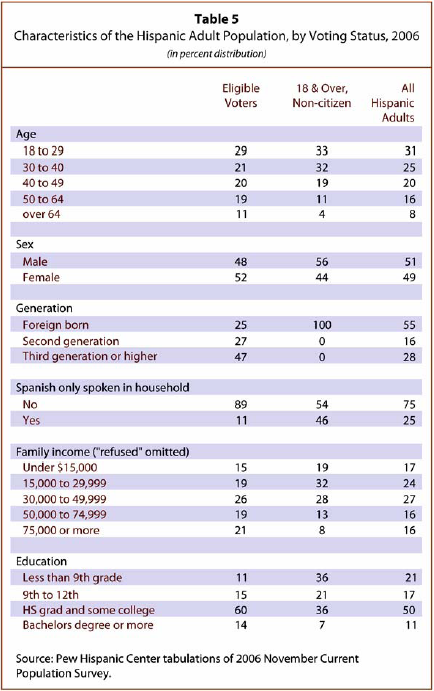 Almost three-quarters (74%) of Hispanics eligible to vote were born in the U.S. Among all Hispanic adults, 55% were immigrants.

The Latino electorate was also, on average, better educated when compared with all Latino adults. Almost three quarters (74%) of the Hispanic electorate had completed high school, compared to 61% of all Hispanic adults.

Characteristics of the Non-Hispanic White Population and Electorate 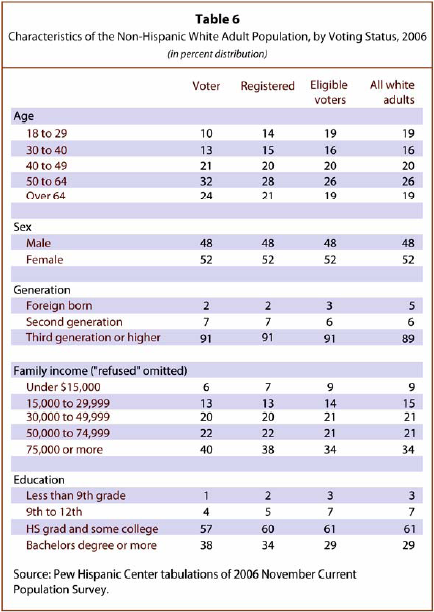 Characteristics of the Non-Hispanic Black Population and Electorate 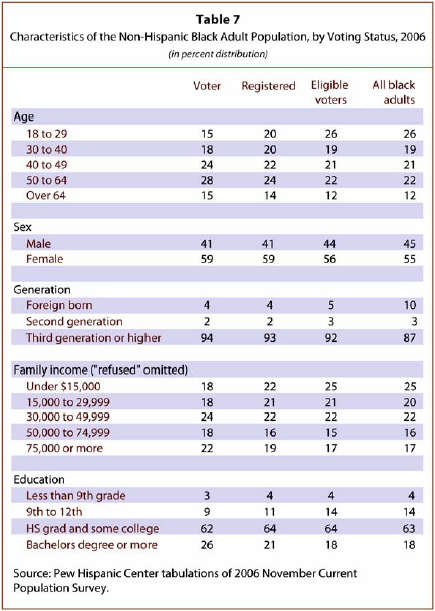 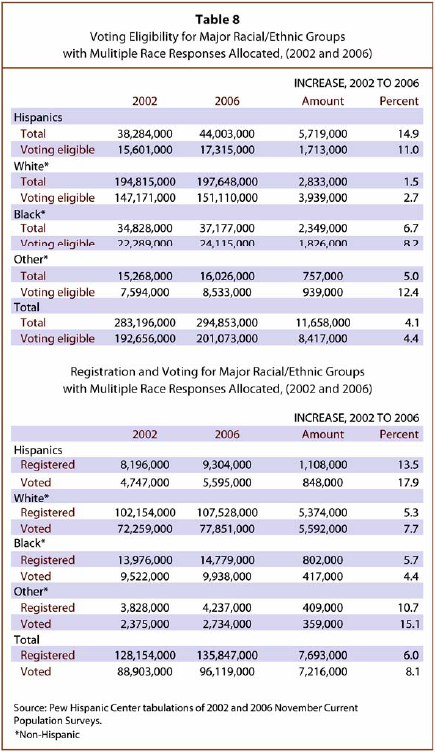 Next: Appendix: Data Source and Race Group Definitions
← Prev Page
You are reading page1Page2
Next Page →