No industry has been as vital to the employment of foreign-born workers—and Latinos in particular—as construction. Since 2003, when the labor market began to recover from the recession, the construction industry has accounted for about 40% of the total growth in employment for Latinos. In that time, Latinos have gained almost 1 million jobs in construction, an increase of 52%.2 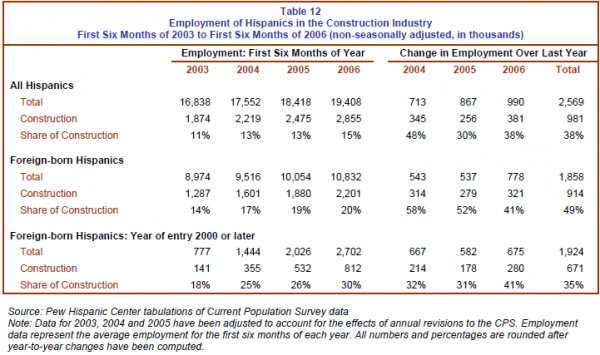 A Boon for Foreign-Born Hispanics

Jobs Mostly in South and West

Construction jobs for Latinos have been largely concentrated in the South and West. The two regions accounted for 92% of all new construction industry jobs filled by Latinos between 2003 and 2006.

In the West, which includes California, Nevada and Arizona, 385,000 new construction jobs were filled by Latinos between 2003 and 2006. That accounted for 39% of all the growth in construction jobs for Hispanics.

The South includes Louisiana and Mississippi, both seriously impacted by Hurricane Katrina. Recent trends by region, however, do not reveal that the hurricane had an impact on construction-sector employment for Hispanic workers.

The recent pattern in employment does not necessarily mean that Hispanic workers did not show up in relatively large numbers in the hurricane-affected areas. To the extent that this was true, the data suggest that it was more a result of Hispanic construction workers relocating from neighboring areas in the South. There is no clear sign that Hurricane Katrina gave an unusual boost to employment in construction for Latino workers either in the South or in the nation at large between mid-2005 and mid-2006.

Next: VIII. Growth in Wages, 2005-06
← Prev Page
Page1Page2Page3Page4Page5Page6You are reading page7Page8Page9Page10
Next Page →