Employment Rate: Percent of the population 16 and older that is employed.

Labor Force Participation Rate: Percent of the population 16 and older that is employed or actively looking for work.

Unemployment Rate: Percent of the labor force that is without work and is actively looking for work.

The year 2000 marked a high point for the U.S. labor market. Driven by a lengthy economic expansion in the 1990s, unemployment rates in 2000 were at their lowest levels in 30 years—below 6% for Hispanics and less than 4% for non- Hispanics. The percent of the population 16 and older that was employed, or the employment rate, peaked after rising for three decades. Greater proportions of Latinos and non-Latinos were active in the labor market, either employed or seeking work, than ever before.

The recession in 2001 and the economic slowdown that persisted into 2003 altered the labor market. The unemployment rate increased, and the employment rate and the labor force participation rate fell steadily. By the end of 2003, the labor-market effects of the recession were beginning to lift, but the recovery would prove to be slow. Most labor market indicators in 2006 fall short of the benchmarks reached after the economic boom in the 1990s.

Unemployment Rate for Hispanics and Non-Hispanics: 2000-06 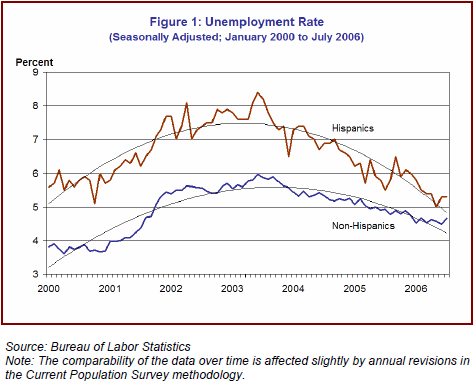 Employment Rate for Hispanics and Non-Hispanics: 2000-06

Among non-Hispanics, the seasonally adjusted employment rate in July 2006 was 62.8%. That, too, represented the result of a consistent, albeit slow, recovery from the most recent low of 61.9% in September 2003. The employment rate for non- Hispanics in July 2006 remained well below its high point of 64.6% in April 2000. 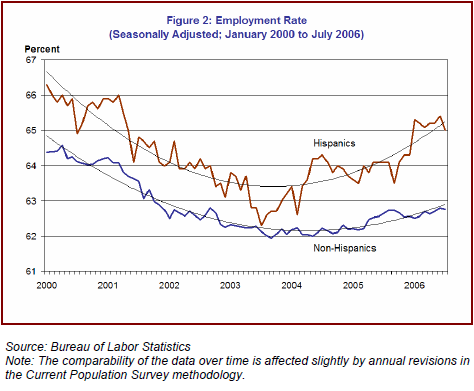 The labor force participation rate, which measures the percent of the working age population (16 and older) that is employed or actively seeking work, is the one indicator that continues to show signs of a sluggish recovery. Even as employment itself has increased, the participation rate has not yet begun to climb for either Hispanics or non-Hispanics. That indicates a lingering surplus in the labor market as some workers may be waiting to actively seek jobs.

For Hispanics, the seasonally adjusted labor force participation rate in July 2006 was 68.6%, or one percentage point higher than in February 2004 (Figure 3). However, the recovery in the labor force participation rate has occurred in fits and starts, with temporary peaks followed by declines. Hispanics remained below the 70% rate reached in 2000.

The seasonally adjusted labor force participation rate for non-Hispanics was 65.8% in July 2006, slightly higher than the low point of 65.5% in April 2004. The labor force participation rate for non-Hispanics appeared to show no signs of recovery since 2004 and remained more than one percentage point less than it was at the beginning of 2000 (67%). 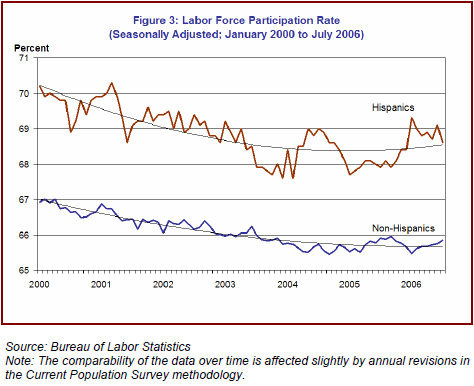 Next: IV. Changes in Employment, 2005 and 2006
← Prev Page
Page1Page2You are reading page3Page4Page5Page6Page7Page8Page9Page10
Next Page →