Reflecting broad changes in their social and economic status, women around the world have been migrating more in recent decades and as a result have constituted an increasing share of migrant populations almost everywhere. But the U.S. has defied this global trend, according to a Pew Hispanic Center analysis of data from the U.S. Census Bureau and the United Nations. Women have made up ever larger shares of legal immigrants to the United States in recent years, as they have elsewhere. However, an increasing flow of mostly-male unauthorized migrants1 has more than counterbalanced the feminization of legal migration, making the U.S. the only industrialized country where the percentage of female migrants has declined over the past 25 years. 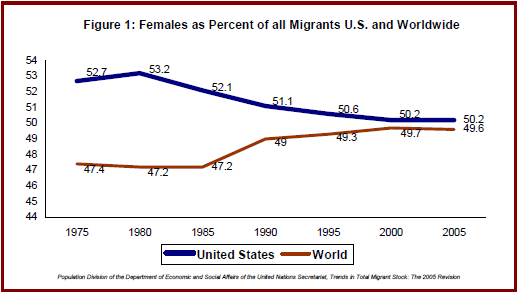 Gender composition is thus a marker of the unique nature of current migration to the United States. It demonstrates the extent to which migration to the U.S. is distinguished by a large and steady flow of males who enter the country and live and work outside the framework of the legal immigration system. No other industrialized country has experienced the same trend in the gender composition of its foreign-born population, and none has added to its foreign-born population as much through the flow of unauthorized male workers.

A Pew Hispanic Center analysis of the March 2005 Current Population Survey shows that of an estimated 11.1 million unauthorized migrants, 58% of the adults were male while 42% were female (Passel 2006). In contrast, females accounted for 52% of the adult legal migrant population in 2005.

Another insight on the gender composition of legal immigration comes from administrative data collected by the Department of Homeland Security .Women accounted for 54% of all immigrants granted admission to the U.S. in 2004 as legal permanent residents or “green card” holders. 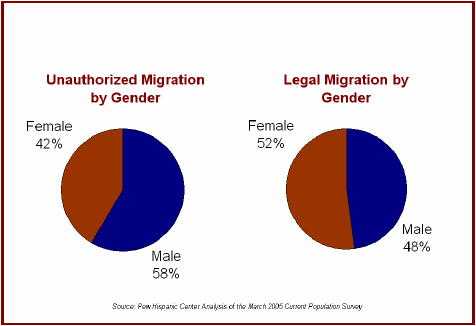 This Pew Hispanic Center report uses data from the decennial census of 1980, 1990, and 2000, as well as the 2004 American Community Survey, to examine changing gender patterns in international migration to the U.S. The analysis makes extensive use of data that establishes an immigrant’s year of entry into the United States. Special attention is paid to Mexico, the largest single source of migrants.

This Pew Hispanic Center report uses data from the decennial census of 1980, 1990, and 2000, as well as the 2004 American Community Survey, to assess changing patterns of international migration to the U.S. as regards to gender. The analysis examines migration flows by making extensive use of data that establishes an immigrant’s year of entry into the United States. Special attention is paid to Mexico, the largest single source of migrants.

Next: II. Migration and Gender
← Prev Page
You are reading page1Page2Page3Page4
Next Page →

Gender and Migration
I. OverviewAbout this ReportA Note on Terminology
II. Migration and Gender III. Other Research Appendix: Data Sources and Tables