Some of the proposals in immigration legislation under consideration in the U.S. Congress would distinguish between unauthorized migrants of long standing and those more recently arrived. For example, one alternative would offer a path towards immediate legal status for those who have been in the U.S. for five years or more while those with less time in the country would have the chance to apply for temporary worker status. Information from several data sources shows that short-term illegal migrants comprise a sizeable and somewhat distinct population.

A Pew Hispanic Center analysis of the March 2005 Current Population Survey shows that there were 11.1 million unauthorized migrants1 in the United States a year ago. Based on analysis of other data sources that offer indications of the pace of growth in the foreign-born population, the Center developed an estimate of 11.5 to 12 million for the unauthorized population as of March 2006. (To see the full report go to: https://www.pewresearch.org/hispanic/reports/report.php?ReportID=61)

In the March 2005 estimate more than 40% of the unauthorized population or 4.4 million persons had been in the country since 2000. (Figure 1)

The March 2005 estimates shows that there are some significant differences in the composition of the short-term unauthorized population compared with those of longer tenure. Most notably, a larger share of adult unauthorized migrants who arrived between 2000 and 2005 are unattached males (53%) than among those who arrived earlier (45%), meaning that a greater share of the men who have been here longer are living with spouses and/or children.

The number of children of unauthorized migrants who are themselves also unauthorized is about equally divided between short and long term. There are an estimated 890,000 children (age under 18) who arrived since 2000 in the March 2005 estimate and approximately the same number who arrived before 2000.

The March 2005 estimate found that unauthorized migrants have a total of some 3.1 million children who were born in the U.S. are thus U.S. citizens. Of those children, about 600,000 have a parent who is unauthorized migrant who arrived in the country after 2000. 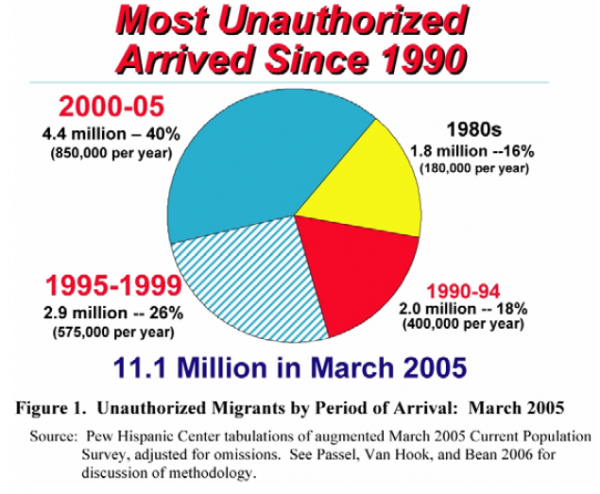 Another source of information on this population is the Survey of Mexican Migrants. The survey provides detailed information on the demographic characteristics, living arrangements, work experiences and attitudes toward immigration of 4,836 Mexican migrants who completed a 12- page questionnaire as they were applying for a matrícula consular, an identity document issued by Mexican diplomatic missions. Fieldwork was conducted in Los Angeles, New York, Chicago, Atlanta, Dallas, Raleigh and Fresno, Calif., from July12, 2004, to Jan. 28, 2005. The sample includes 2,065 respondents who said they had been in the U.S. for five years or less on their current stay. The Center has published three reports on the Survey of Mexican Migrants that are available at https://www.pewresearch.org/hispanic/surveys/.

Mexicans who have been in the U.S. for five years or less are much more likely to think of themselves as temporary migrants than those of longer tenure. The survey asked “How long do you think you will remain in the United States?” Respondents with five years or less in the country were twice as likely (27%) to offer an answer of two years or less than were those who had been in the country for six to ten years (13%). Overall, two-thirds (66%) of the migrants in the U.S. for five years or less offered responses that set a time limit on their sojourn. Among those of longer tenure, a substantial majority picked responses indicating they viewed migration as an indefinite or permanent endeavor. (Figure 2)

Some of the other major findings from the Survey of Mexican Migrants regarding Mexican migrants who have been in the United States for five years or less include: 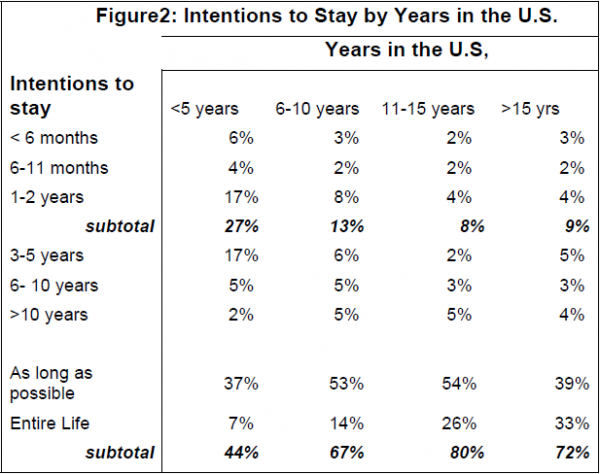 Less than a quarter (23%) said they had any form of photo ID issued by any government agency in the United States.

Nearly half (48%) are married or have a common law spouse. Among those with a spouse, more than two-thirds (69%) live with that spouse in the U.S. while a quarter (25%), the great majority of them men, left that spouse behind in Mexico.

More than half (55%) have children, and among the parents two-thirds (67%) have children living in the United States while a third (32%), again mostly men, have left all their children behind in Mexico.

More than three quarters (78%) report that they have relatives other than a spouse or children living in the U.S. and nearly two thirds of all short term migrants (63%) say that some of those relatives live in the same town.

Virtually all of the recent arrivals had some kind of work before they left Mexico. Excluding housewives, students and retirees from the analysis, 5.3% of those who had been in the country two years or less and 8.3% of those in the country for between three and five years reported that they were unemployed before they left Mexico. By contrast, higher shares of longer term migrants (9.7% for six to ten years and 15.2% for eleven to fifteen years) reported unemployment prior to migration.